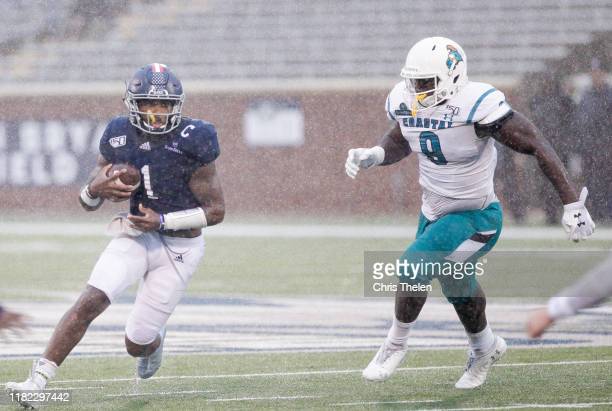 In an unusual college football season the Coastal Carolina Chanticleers made the most of their year. They finished the season with an 11-1 record, and they have a few players with a chance to be drafted this season. Their most well-known and only defensive player drafted is Josh Norman and Tarron Jackson is hoping to be the next to hear his name called. He’s a muscled-up defender who aligned mostly as the 4i defensive lineman out to the edge. He aligned on both sides of the field and in two, three, and four-point stances.

Against the pass, he has solid hands and good acceleration. He showcased a powerful punch, an effective double swipe, and a strong club to help move defenders from his path. The combination of his swipes and acceleration allowed him to get to the top of the arc and flatten to the QB. He has some twitchiness to his pass rush and had success with rips, stabs and hands some nice spin moves to the inside. When aligned inside, he uses a club/swim over the guards. He’s got a great motor when fighting to the QB or chasing down runners. He has solid agility, quickness and strength to loop on stunts and bull rush the guards. He was not used in coverage in the games watched.

At Kansas, from the left edge he uses a spin to the inside to some quick pressure.

Against South Alabama, from the left edge he uses a double swipe to clear the hands of the tackle and flattens quickly to chase down the QB and force the fumble.

Versus South Alabama, here is an example of the effort he gives all game. From the left side he will face to pass blockers, spins out of it and chases down the QB.

At Texas State, from the right edge he will angle to the B gap inside before using a club swim over the tackle to get the sack.

Against the run, he uses good hand placement and punch when playing in a two-gap scheme, and displays the strength to set the edge as well as having a good understanding of his role on the backside. He was solid reading Zone blocking schemes, and showed the quickness and strength to beat blocks to the outside. He displayed good aggressiveness to the ball and very good pursuit.

At Louisiana, he’s the 4i tech on the left side, and will swim over the guard to make the tackle in the backfield.

At Louisiana, as the 5T on the right, he uses a rip to get inside the tackle and make the quick stop.

At Texas State, he shows his strength using one arm to stand up the left tackle and set the edge.

He pops up out of his stance instead of forward, limiting his power and acceleration. There is a lot of excess movement to his arm, almost flailing away from his body when pass rushing. His bend is adequate, and he had several stumbles at the top of his arc. Jackson rarely gets his hands up in passing lanes. He doesn’t have the snap quickness to play in a one-gap scheme. He needs to keep his eyes on the ball and improve reading the mesh point. Jackson struggles reading Gap/Power schemes, and consistently tries to go under the lead/pulling blocker. He doesn’t have the anchor to handle double team blocks. Has tightness in his body and needs to work on his flexibility. A quicker disengage from blockers would help him in the run game.

At Kansas, on this Gap run he recognizes the tight end coming to block him and engages, but with a clear line to the RB this was the wrong decision.

Again at Kansas, he goes after the tight end, loses sight of the ball, and the quarterback keeps it and runs behind him.

Overall, Jackson has a very good motor, good acceleration, heavy hands and can get pressure with rips, spins and stabs. He reads Zone runs well and has the quickness and strength to get ahead of blockers or set the edge. Areas of improvement include quickness and pad level out of his stance, general improvement in his pass rush, reading of the mesh point and diagnosing and execution versus Gap/Power scheme.

Jackson played more often inside in a three-point stance, but he projects to play on the edge in the NFL. He could play as a defensive end in an even front or a stand-up outside linebacker in an odd front. There is pass rush ability here, and NFL coaching should be able to clean up his technique and some yoga/pilates classes to improve his flexibility could unlock his potential. For Pittsburgh, he’s a developmental outside linebacker who could start as the OLB4 and as a special team contributors, with potential to be more.

Games Watched:  2020 – At Kansas, At Louisiana, Vs South Alabama, At Texas State, Vs BYU