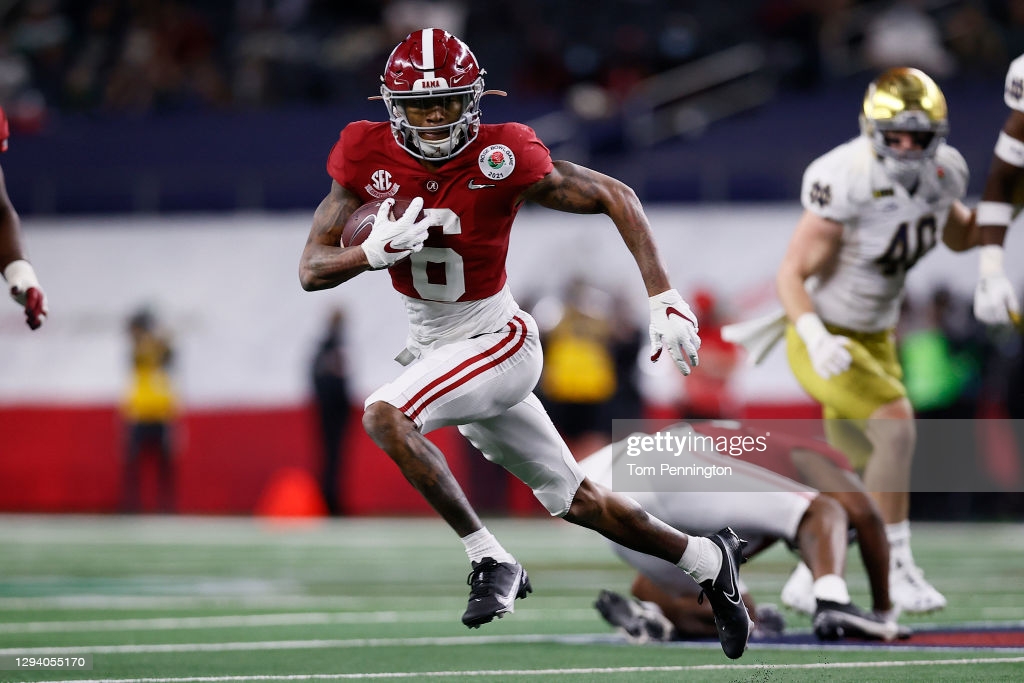 – Has been deployed as a boundary receiver and also in the slot
– Has good long speed and accelerates well after the catch in the open field
– Explodes off the line from his stance and gets on top of the corner in a hurry with his long strides
– Has a good feel for getting on top of the DB’s toes and stacking them on deep routes
– Utilizes the quick jab step on route concepts to get separation from defenders
– Can run the whole route tree and be utilized in the screen game, on intermediate crossers, and vertically on the deep ball
– Good foot quickness and can cut back very well in open space
– Slippery runner after the catch that can make people miss
– Has shown ability to make contested catches while taking a big shot from defenders
– Can make back-shoulder catches and seems to adjust well to the ball in the air
– Footwork makes him dangerous on double moves
– Willing to throw his body on the line to make a play
– Comes up with the biggest catches in the biggest moments
– Plays stronger than his listed size and is willing to take a hit/throw a block
– Has good contact balance as a runner and can bounce off of wimpy tackles
– Proved he can contribute on special teams as a returner after the injury suffered to Jaylen Waddle freed up that role
– Dominated the nation in his final season and led in nearly every statistical category in 2019 with three other potential first round receivers seeing play time
– Often faced the opposing team’s #1 cover man and would often draw safety help, freeing up teammates underneath and over the middle

– Has average length but a frail frame for the position
– May not be the best option returning kicks and punts at the next level due to his thin frame
– Size brings into question his durability, how he will handle press coverage vs NFL CBs

– Senior prospect from Amite, Louisiana
– Highly touted five-star recruit at receiver in H.S. who chose the Tide over home state LSU
– Recorded eight catches for 160 yards and three touchdowns as a true freshman and contributed on special teams coverage units
– Hauled in 693 yards on 42 catches and six touchdowns as a sophomore in 13 games played
– Started 13 games as a junior and recorded 68 catches for 1,256 yards and 14 TDs
– Exploded in his final season, playing in 13 games and recorded 117 catches for 1,856 yards and 23 TDs, along with a rushing TD and a punt return TD
– Sidelined with a dislocated finger in the 2020 National Championship Game after recording 12 receptions for 215 yards and three scores in the first half
– Second team All-American in 2019, All-SEC First Team in 2019, first team All-America in 2020, first team All-SEC in 2020, Heisman Trophy winner in 2020, named 2020 Player of the Year, Biletnikoff Award winner in 2020, two-time National Champion
– One of the Crimson Tide’s permanent team captains for the 2020 season

DeVonta Smith burst onto the scene as a true freshman in the biggest game of the year, catching the game-winning touchdown in overtime in the National Championship game vs Georgia. Since then, his role in the Crimson Tide offense has grown, posting respectable numbers as a sophomore before completely breaking out as a junior. He led all Tide receivers in yards and touchdowns, operating in all phases of the field as a short, intermediate and deep receiver.

When he decided to return to Tuscaloosa, he ended up having the season of a lifetime, winning his second National Championship and capturing the Heisman Trophy. He is scheme-versatile, playing both in the slot and on the outside. Smith is explosive off the line, being able to stack defensive backs quickly and get separation on outside releases despite his lanky frame. Here is a great example with Smith lining up in the slot against LSU, where gets off of the jam of the defensive back at the LOS, getting an outside release on the slot fade concept, turning on the jets and getting ample separation from the defender and catching the ball over his shoulder in-stride for the long TD bomb.

He took Derek Stingley Jr., widely regarded as the best CB prospect in the 2022 draft class, to the woodshed both times he matched up with him. Here in 2019, he works vertically against Stingley, getting the outside release, hits the stop-and-go, and accelerates upfield, high-pointing the ball along the sideline for a highlight reel catch on the back-shoulder throw.

He has deceptive speed downfield and in run after the catch situations, being able to break away from defenders when he has daylight. Here against the Tigers, Smith shows great burst off of the snap, stacking the slot defender fairly easily, blowing past him and the outside corner that tries to help out, and getting over five yards of separation as the ball arrives for the big TD catch.

He is very shifty in the open filed and can make defenders miss, but also plays with an aggression to run with physicality.  Here Smith gets the easy separation on the slant concept on the left side, catching the ball over the middle with #3 JaCoby Stevens coming in to light him up. However, Smith stays upright upon the big hit, keeping his legs churning to fight for yardage as Stevens and other defenders come in to take him down. Sure, he didn’t break through the tackle on this play, but this shows Smith is not afraid to work over the middle and can take a hit and has that mindset to try and fight for more.

He has the ability to make the combative catches over the middle and can win the jump ball along the sideline and in the red zone. Here against LSU, Smith gets off of the line on an inside release against Stingley Jr., creating separation inside then turning back outside toward the back corner of the end zone. He leaps up to snag the ball out of the air with one hand overtop of Stingley while jostling for position.

Smith is efficient on his inside releases with his ability to utilize his jab step at the top of his route to create separation and get an inside release on slant and post concepts. That can be seen here on this TD grab against Mississippi State, where Smith gets to the top of his route where he gives a hesitant step to freeze the defender, takes a hard jab step outside, then breaks back inside in a smooth transition for the score, catching the ball away from his frame with arms extended.

His foot quickness and ability to use the double move make him a threat to score on a screen pass at the LOS, as well as on the go route. Here against the Bulldogs, Smith completely turns around the corner in coverage, hitting the out-and-up and putting the defender in a spin cycle, yet slows up to catch the underthrown ball with the defender draped all over him and his hand in Smith’s face.

Smith never served in the return game his first three seasons on campus, having the likes of Jaylen Waddle and Henry Ruggs on the team didn’t require him to play that role. Once Waddle went down, Smith showed that he has the playmaking ability to contribute in this area of the game, as well, should a team trust him there with his size.

Smith does lack the size you desire from receivers, having a thin frame that could be more susceptible to injury at the next level. However, he plays much bigger and stronger than his listed size, and will come down with catches while receiving contact. Here in the LSU game in 2019, Smith runs the deep over concept, staying on track after getting knocked by #3 JaCoby Stevens, making the grab with Stingley arriving to hit him as the ball comes in, sticking his hand in to contest the pass, Smith holding on to the ball to complete the catch.

Naysayers may ding Smith for being in an offense with Ruggs, Jeudy, and Waddle all on the team, but one can look back to 2019 and see that Smith was truly the featured receiver in that passing game. He consistently came down with the clutch grabs in the most important moments for the Tide, and was willing to come back for his senior season despite a stellar junior performance, only to be the catalyst for another Crimson Tide national title.

Smith can come in right away as both a technician and good athlete to provide a spark as a #2 WR for an offense, and earn the status of a #1 for a franchise. He can operate in nearly any scheme and can play both on the inside and the outside. Size can be a concern in terms of press coverage/long term durability, but Smith has shown the demeanor and willingness as a blocker, runner, and contested catch guy to succeed at the next level. Overall, Smith has the intangibles you look for at the position and has a knack for making the biggest plays when it matters most.

DISCLAIMER: I am not suggesting that DeVonta Smith is in play for the Pittsburgh Steelers at #24. He should be long off of the board by that time and the need doesn’t match up at the time given the receivers on the roster. I merely want to point out his strengths as a football player and acknowledge that he is set up to be a great pro, regardless about the concerns of his size. Were WR a more pressing need for Pittsburgh, Smith would be at the top of my wish list.

He can operate anywhere in the formation and win in all phases of the passing game, having dominated the best competition in the best conference in college football both as the main man and with a bevy of other first round receivers around him. To me, the size, route running, and ability to win vertically all remind me of Marvin Harrison, as Harrison was of similar size and played as the alpha for Peyton Manning’s passing attack for nearly a decade. I truly think that Smith is set up to do great things at the next level, regardless of his weight, and the team that drafts him will be getting quite the playmaker for its passing attack.