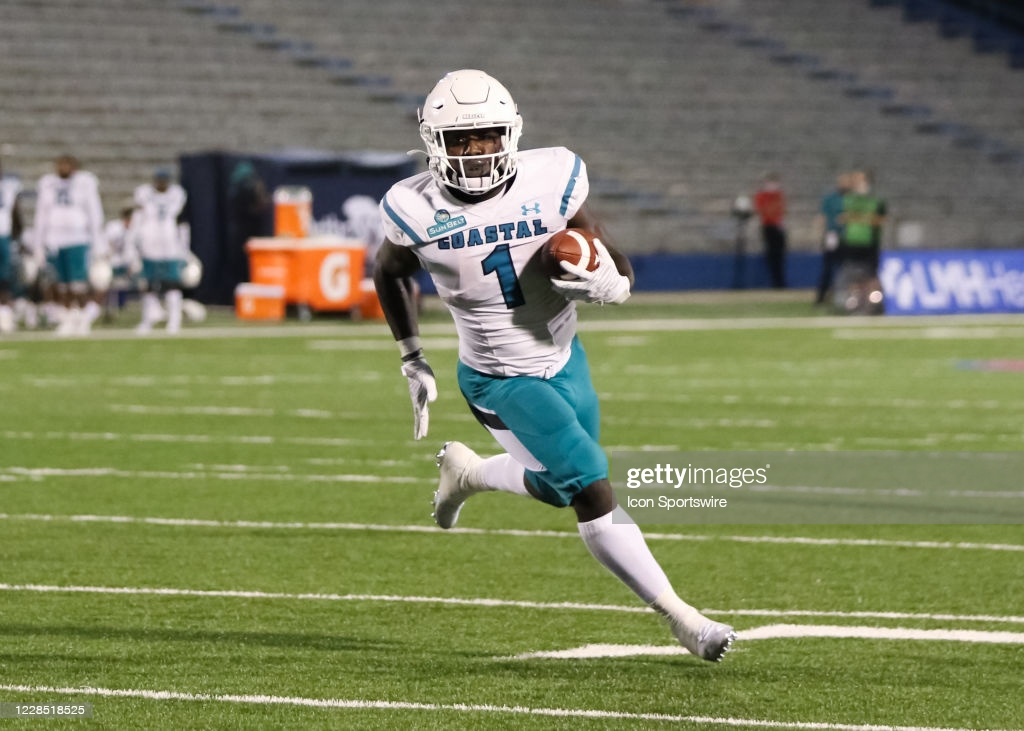 Diminutive in stature and abundant in production describes Coastal Carolina running back C.J. Marable. Totaling nearly 3,400 yards and 41 touchdowns in three years is about as productive as they come. He was used in multiple run schemes and would also occasionally split out to the slot.

As a runner, he has solid patience and good vision to find gaps to run though and to tuck behind pulling or lead blockers. He has a solid jump cut behind the line of scrimmage to align to the open running lane and does a nice job working his way through traffic. His low center of gravity allows for solid contact balance. In the games watched the majority of his yards came on option plays allowing him to get outside where there are fewer defenders. He likes to use a spin move to attempt to avoid tacklers.

At Kansas, here is an example of Marable (1) showing his vision and jump cut to work his way through traffic.

At Texas State, he takes the handoff to the right, getting a big hole and makes one cut to get to the end zone. This is about the best to expect when it comes to elusiveness for him.

Against BYU, this was his most productive running play game in, game out: An option run out of pistol getting him in space.

Another play vs. BYU, another look at his vision and jump cut to find his way through traffic to find pay dirt.

As a receiver, he had good production with over 80 career receptions and 12 TDs. From the backfield his most common routes were the wheel, swing, angle, flat and stab, and from the slot it was curl, fly and seam routes. He displayed good hands and solid ability to adjust around his frame, and was solid in the scramble drill to try to find open areas. After the catch, he converts quickly to a runner and gets what he can.

At Louisiana, he adjusts nicely to this swing pass and is able to find some space back across the field for a nice gain.

At Louisiana, he will loop around from the backfield, adjust to the ball behind him, and find the end zone.

At Troy, he sneaks out through the line of scrimmage and tracks the ball nicely for the touchdown.

In Pass Pro, he is willing but somewhat reluctant as a blocker. He shows good mental processing to find and move to the free rusher and will do his best to slow the rush. He has a solid chip on the edge and makes the effort to cut block when needed.

At Texas State, you can see his head swiveling pre-snap to try to determine who is coming, and he reads it right and makes the cut block.

He is a one-speed runner with marginal burst. He has poor elusiveness and change of direction to make quick cuts to elude defenders, and has to gather himself before making a cut. Marable has poor play strength to move the pile or run through tackles.  He has adequate speed to get to the edge or take away the angles of defenders. As a receiver he was adequate at creating space and marginal acceleration after the catch. He doesn’t make many defenders miss or create often after the catch. His technique in Pass Pro needs improvement to get him to stay square and not lead with his shoulder.

Overall, Marable had good vision and solid patience as a runner, and can find his way through traffic. He has some scheme flexibility and solid contact balance. He has good hands and adjusts to ball well while on the move as a receiver. Areas to improve include his technique in pass protection, adding play strength and working on his elusiveness.

Marable is tough competitor, but at his size you have be dynamic in some area. Speed, elusiveness, or return ability would fit, but I just don’t see it from him in any areas.  He could fit as a third down RB in any run scheme and be a solid receiver out of the backfield, but it will be an uphill climb.  Based on the Steelers “fits” for running back and their poor track record with smaller backs, I don’t see Marable as a good option.