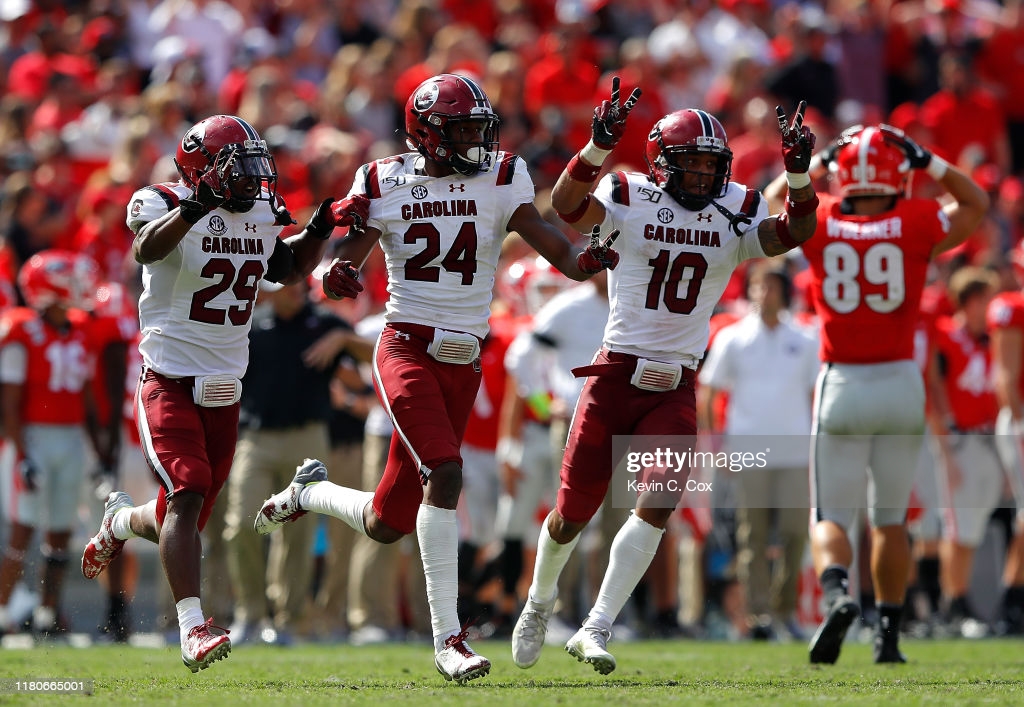 – Decent explosiveness and leaping ability (36.5” vert)
– Has fantastic arm length (34”) to contest jump balls and get hands in passing lanes
– Has the size and strength to play press man coverage against bigger receivers
– Can be a menace in Cover 2 or Cover 3 looks with his length in short passing lanes taking up space
– Can be a viable option to line up against TEs spilt out in the slot or near the LOS
– Has the hands to take the ball away in coverage
– Physical at the LOS, can play through receiver blocks on quick passes and in the screen game to make tackles
– Length aids in his reach to bring down ball carriers
– Has experience playing both corner and safety for the Gamecocks

– Possesses only average to below-average speed (didn’t run the 40)
– Change of direction and quick transitions will be a struggle for him due to his size
– Can be slow to open up with receivers in coverage due to high center of mass and long legs
– Needs to play with stronger, more accurate punch at the LOS when in press man coverage
– Will get grabby in coverage if he feels a receiver can separate on top of him due to lack of closing speed
– Most of his ball production came on poor passes when he wasn’t in great position
– More often the nail than the hammer when it comes to tackling
– Needs to play with a more consistent demeanor when coming up to tackle, some of his attempts are half-hearted with poor technique which leads to misses

– Recruited as a safety but was placed at CB by the coaching staff
– Early enrollee into Columbia in the spring of 2018
– He started two of 13 games played as a true freshman, where he recorded 17 tackles, two for loss, a forced fumble, and one interception
– Started 12 games as a sophomore (one at safety), posting 59 stops (45 solo), two for loss, nine pass breakups, and four INTs
– Started five of six games played his junior season recording 10 tackles, two interceptions
– Opted out of the remainder of the 2020 season in November after battling a groin injury and seeing HC Will Muschamp fired
– 2019 Second Team All-SEC, 2018-19 SEC Academic Honor Roll

Israel Mukuamu burst onto the scene after his stellar performance in his sophomore season against Georgia where he snagged three INTs, one of which he returned for six, in an effort to upset the Bulldogs on national television. After that, Mukuamu became squarely on the radar for draft enthusiasts and members of the media for his potential going into the 2020 season. Alas, with a down year in Gamecock football resulting in the head coach getting fired halfway through the season and dealing with a nagging groin injury, Mukuamu’s draft stock took a tumble.

When analyzing his traits, his size and length immediately stick out as his greatest assets. Standing over 6’4″ with long arms, Mukuamu isn’t made like most cornerback prospects. His size and wingspan are extremely nice to have both in pass coverage and also in run defense. Mukuamu has shown a willingness to come downhill and tackle, having the size to work through blocks and make plays on short passes and quick screens out to the boundary. Here is an example vs. Kentucky where Mukuamu recognizes the quick screen to the receiver, fights off of his block, and makes a play in the backfield for a loss.

His size and length make him a great asset to deploy near the LOS to line up against physical receivers or TEs and get hands-on with them at the snap of the football, getting them off their route or working off of blocks to ruin quick passes outside. Another example is here against Florida where he gets physical with #8 Trevon Grimes from the snap, causing #1 Kadarius Toney to run into his blocker and fall down, resulting in congestion on the route and timing being thrown off with the QB. The ball is released, and the receiver isn’t able to get there, but Mukuamu is able to extend for the ball and make the diving INT before the ball hits the ground.

His length also makes throwing his way difficult for QBs trying to fit the ball into smaller passing lanes. His wingspan gives him the chance to play the ball outside of his framework better than nearly any other defensive back, and honestly most receivers he will face. Here’s an example of one of the three INTs Mukuamu makes in his game vs. Georgia where he plays up on the receiver in man coverage on the left side, forces him to the boundary, notices the ball is out in the wrong spot, but still is able to pivot and snag the ball out of the air heading toward the sideline for the pick.

While his length may suggest that Mukuamu is at his best when in press man coverage, some of his best work comes when he is in off-man of playing zone in a Cover 2 or Cover 3. This allows him to cover up for his lack of long speed and play the ball in front of him, breaking on it once thrown and using his long strides and arms to impact the pass. That clearly happens on this play where Mukuamu uses a slide/side shuffle technique on the right side, giving the receiver space, but reacts to the ball being thrown up by #11 Jake Fromm into the air, breaking on the ball and picking off the pass in the air, transitioning to become a runner up the sideline for the house call.

However, as you probably have noticed thus far, a lot of Mukuamu’s plays in the passing game have come on bad throws by the passer. Often times he is out of position and may even be beat, but due to poor ball placement on passes, Mukuamu is able to write his wrongs and make a play on the football. Take for example this play against Charleston Southern where Mukuamu whiffs on the jam at the LOS, giving the receiver the sideline and the free release to get on top of him for the big play. However, the QB severely underthrows the pass, having the ball land directly into Mukuamu’s chest for the pick to cover up the fact he got beat.

Mukuamu’s length can be a detriment to him in terms of being able to quickly change direction and adjust to receivers breaking out of their routes. His foot quickness is not up to speed with seasoned route runners, leaving him in the dust. Here’s a play against #84 Kyle Pitts on the goal line where Mukuamu lines up one on one with the receiver and reaches out on the snap rather than move his feet, allowing Pitts to cut inside on the slant for the easy TD. Mukuamu struggles with getting grabby in coverage when he feels he is beat, and his feet can be in quicksand if he thinks he can impact the pass with his length.

As a tackler, Mukuamu has the traits to be a solid contributor in the run game, but his consistency in his effort is spotty at best. Sometimes he comes off as uninterested and doesn’t play with the physical demeanor you want to see from a defensive back of his profile. Watch this classic highlight play by Kadarius Toney and how Mukuamu has the angle to hit him from the side, but slows up and arm tackles him rather than going through him, resulting in Toney breaking out of the whimpy tackle for the long TD run.

Overall, the length and physical tools are enticing for a player like Mukuamu, but his lack of long speed, lateral quickness, and refinement as a tackler raise some red flags concerning his immediate impact at the next level. Ideally you would like to see him in a press man scheme given his measurables, but his better fit may be as a Cover 2 player playing the ball in front of him with safety help overtop to avoid him getting beat deep. A great player comparison I found with a player that had corner and safety experience in college and also plays in a zone-heavy scheme with the length to affect passing lanes is Tre Flowers for the Seattle Seahawks.

Flowers was drafted in the fifth round, and I could see Mukuamu going in the same range as a developmental corner, who teams will have to find the right spot for in their scheme to be successful. He could play safety as well, but his inconsistencies as a tackler and inability to change directions quickly may not be the best choice for a team’s last line of defense. While the Steelers have a need at CB, they more likely need a slot defender and currently have long developmental corners like Justin Layne and James Pierre on the roster. Mukuamu more likely fits a scheme like the 49ers or Seahawks where the scheme can cover up his weaknesses and capitalize on his strengths rather than Pittsburgh, where he would be asked to play on an island more than he would probably be comfortable with.