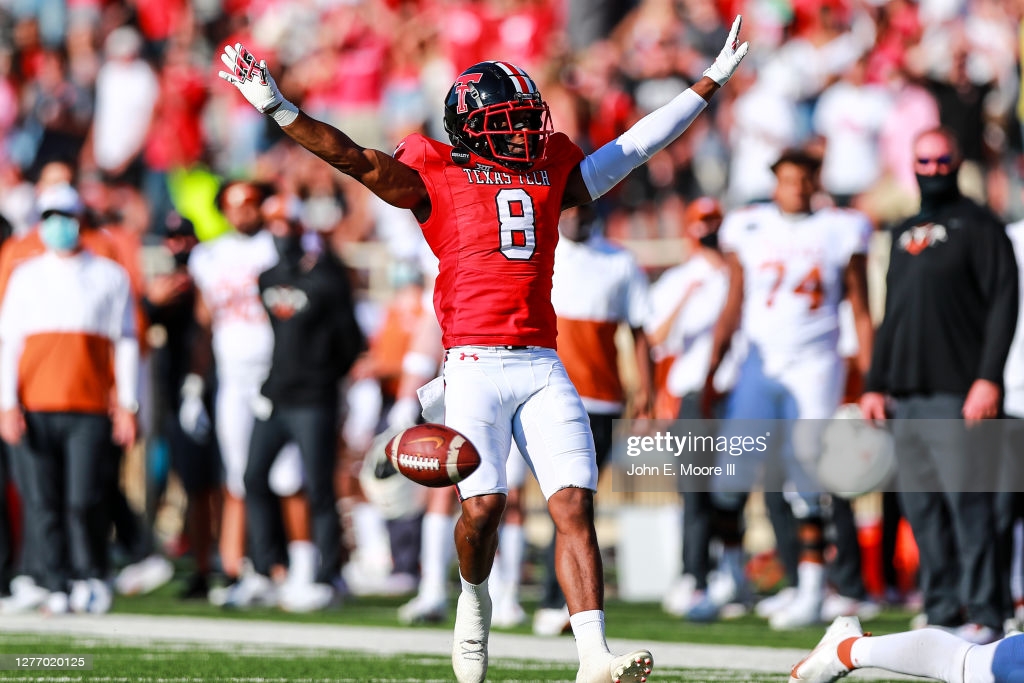 Zech began his career at Penn State before transferring to Texas Tech for the 2019 season. Playing for Texas Tech is what allowed his collegiate career to really take off. In his recent 2020 season, McPhearson intercepted four passes with six passes defensed. With a strong Pro Day showing, McPhearson is likely on the radar of a lot of NFL scouts, meaning he could find an NFL home on Day 3 of the 2021 NFL Draft.

This first clip shows McPhearson coming away with an interception from his 2020 game vs. Baylor. Texas Tech only rushes three, dropping eight into coverage (looks like three deep, five under). McPhearson (top of the screen) is playing a deep zone assignment and is able to read the QB’s eyes to get a break on the pass. It’s an overthrow, so McPhearson is gifted one here, but his ball skills do show up on tape.

This second clip shows another interception for McPhearson, this time against Oklahoma State in 2020.  McPhearson is in off coverage boundary side and mirrors the receiver vertically. While the rest of his coverage is not shown in the broadcast view, we can see from the replay that the pass was intended for wide receiver Tylan Wallace, who McPhearson was not covering. This means McPhearson was able to stay with the boundary side receiver upfield, then gets his eyes on the quarterback in order to see the throw and make a play on the football. Great awareness.

This clip is from the same 2020 game against Oklahoma State. McPhearson is in off coverage field side. What stands out about this clip is McPhearson’s recognition, then break on the throw. Since he’s already giving the receiver cushion, he displays patience to let the receiver come to him while he’s reading the QB’s eyes. The QB takes a short, quick drop, and McPhearson is able to react and explode on the hitch route in order to get in front of the receiver as the pass arrives, denying a catch.

This clip is from Texas Tech’s 2020 game vs. Oklahoma. McPhearson (field side) illustrates he’s not afraid to come up and make a tackle. He passes off the receiver heading deep, reads what’s happening in front of him and sees the running back leak out to the flat, then he fires down to lay a hit on the RB, catapulting him into the air.

This clip is from Texas Tech’s 2020 game against Texas. McPhearson is lined up as the field side safety in a long distance, third down situation. He reads the routes of the receivers in front of him while staying patient until he’s able to diagnose where the QB is going with the football. Once he is certain about the QB’s intentions, you can see that he breaks on the vertical route closest to the sideline, and climbs the ladder to make it a contested catch that the receiver is unable to reel in. This clip displays McPhearson’s positional versatility on the back end.

This clip is from overtime in the 2020 Texas Tech-Texas matchup. McPhearson is field side. Post-snap, he shuffles backwards in a side-turn. With a receiver motioning across the formation for a possible swing pass, McPhearson hesitates due to the new threat, allowing the field side receiver to cut inside on a free lane to the end zone. With no inside help due to the middle of the field safety’s positioning, it becomes an easy throw and catch for Texas to score.

In this clip from Texas Tech’s 2019 game against the Iowa State Cyclones, McPhearson is beaten on a throw to the end zone while guarding a bigger tight end. Post-snap, McPhearson is a bit high in his backpedal but displays quick feet as he keeps eyes on the QB while ensuring he stays with the tight end. However, with size working against him in this situation, the tight end positions himself behind McPhearson, and McPhearson is unable to jump for the football in the end zone. McPhearson does often compete at the catch point, but these types of mismatches in terms of size put him in a difficult position to make plays at times.

This clip is from the same 2019 game vs. Iowa State. McPhearson leaves his shallow zone to instead chase the field side receiver running a drag route. Since the rest of the defense is maintaining their zone assignment, this leaves the flat wide open for the running back to leak out and pick up free yards, which the RB turns into a big play.  Some type of miscommunication or mental error must have occurred on the defensive side of the ball, specifically for McPhearson.

A positive is that he chased the RB down to make the tackle, putting in effort to ensure the big play didn’t become a scoring play.

Zech McPhearson offers upside as a defensive back. He is a versatile defender with valued plus traits, and with good Pro Day numbers, numerous NFL franchises will most likely have him on their radars come draft time. Teams that employ a zone-based scheme may have their eyes on McPhearson, but he is capable in man coverage (especially in the slot) as well.