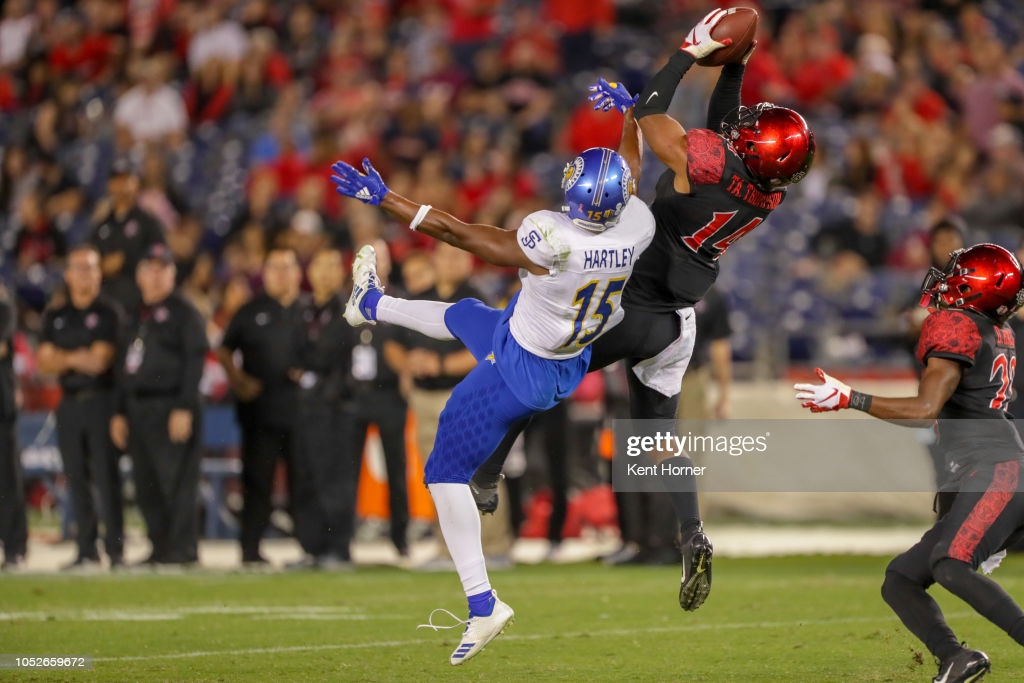 – Smooth athlete who plays with natural feel for the game
– High level IQ that allows him to read plays before they happen
– Showcases short area burst to close on short and intermediate routes
– Alignment versatility, lined up at all the defensive secondary including deep and boundary safety, nickel, sub package LB
– Ball-hawk who is constantly making plays on the ball or forcing turnovers
– Excels playing short zone coverage and using leverage to his advantage
– Fundamentally sound, shows patience and urgency with tempo of play
– Four year starter who also played a number of snaps on special teams

– Struggles with covering long speed as a nickel
– Fairly average athlete and lacks range to be full-time deep safety
– High motor but pursuit angles and coming to balance to make tackles inconsistent
– Not an ideal fit in man coverage due to lack of physicality at LOS, long speed
– Does not shed blocks with consistency nor urgency on the perimeter
– Needs to improve productiveness in run support

Some football players aren’t overly flashy or have overwhelming traits that NFL teams salivate over. However, San Diego State hybrid Safety and Nickel Tariq Thompson possesses a high football IQ that puts him in the right position at the right time more times than not. In his four seasons as an Aztec, Thompson forced 18 total turnovers (12 interceptions, 6 forced fumbles) and defended 35 passes. His ball production is more than impressive.

In this first play against Fresno State in 2019, aligned in the slot, Thompson does a nice job sinking under the corner route in zone coverage, going up and bringing down the interception. As the play develops, it almost looks like he knew the corner would be entering his zone.

Against Central Michigan in 2019, Thompson once again understands the route concepts and formation being thrown at him. Lined up as the deep safety, Thompson sees no immediate threat underneath in his zone so he beats the outside receiver to the post and makes a great interceptions. Another instinctual play from Thompson here.

Making plays in coverage isn’t the only thing Thompson can do. On this fourth and short quarterback keeper against Fresno State in 2019, Thompson chases down the quarterback and prevents him from getting the first down. His run support does need improvement but this was an impressive open-field play.

As much upside Thompson shows in coverage, projecting his role in the NFL will be tough because he doesn’t possess elite sideline to sideline speed or closing burst to be a deep safety. Against UCLA in 2019, Thompson gets caught watching the quarterback and being indecisive on closing on the crossing route across his face or staying out for a post towards the back of the endzone. While the slot corner did get beat, Thompson doesn’t provide much help over the top, leading to a touchdown.

In addition to not having quick twitch athleticism, Thompson lacks long speed and lateral quickness to be a full time starter as a nickel for a defense. Against San Jose State in 2019, a free release from the wide receiver put Thompson in trail position, a step behind the receiver. Although Thompson recovers and nearly makes a play on the ball, the rep shows he is better off playing more of a hybrid role versus one role that will accentuate only some of his strengths.

Watching Thompson close on short and intermediate routes from the slot gives insight on how he picks up on a team’s tendencies. Against UCLA in 2019, Thompson closes quickly on a five yard hitch route and dislodges it from the receiver’s hands. Instinctual play from Thompson, as he quickly clicks and closes, and makes a play on the football.

Final play from Thompson shows his competitive toughness and instincts once again. Again, aligning in the slot, he matches with the receiver man to man, and despite the size disadvantage, gets his fingertips on the ball to deflect it away. He won’t always win those battles in the NFL but has the willingness to take on tough assignments when needed.

Tariq Thompson isn’t going to be a highly sought after player until late on Day 3. With his average athleticism and size, he’ll likely be selected as a late round flier.

The nickel position has opened up for the Steelers with the departure of Mike Hilton. While Thompson won’t be the ideal threshold to fill the position, he does bring versatility as an in the box player, nickel, experience in both safety spots, and plenty of special teams snaps as well. He could be a valuable piece who has the chance to develop into a rotational player in a Steelers secondary that will continue to get younger over the next few years.