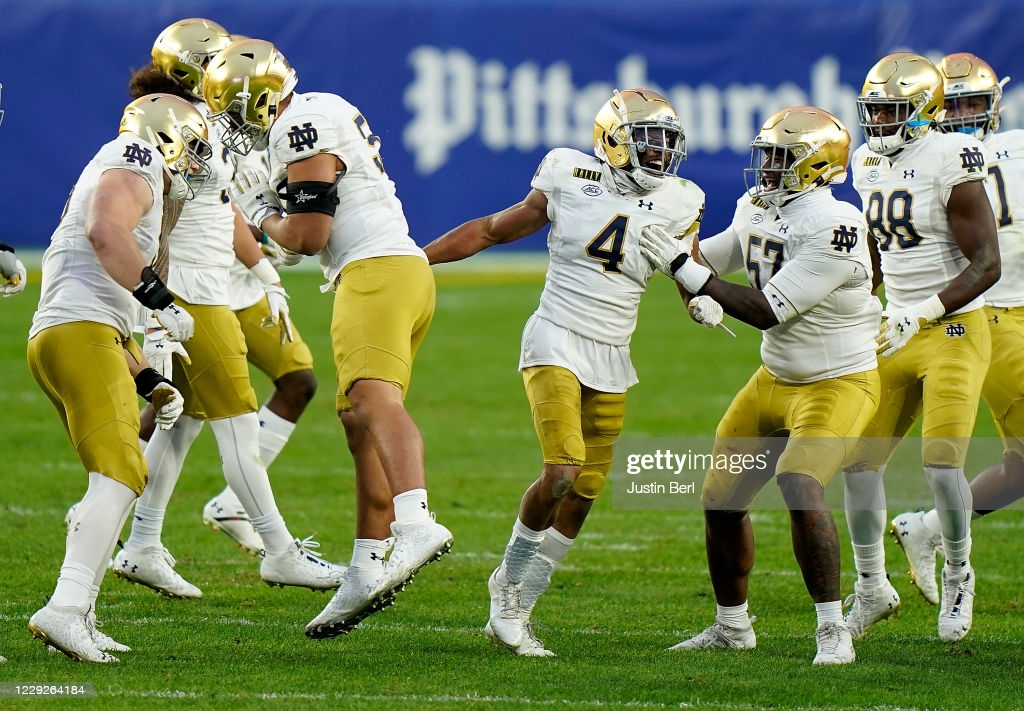 Nick McCloud spent the early portion of his collegiate career as a member of the NC State Wolfpack.  At NC State, he intercepted 3 passes.  After missing the majority of his 2019 season due to injury, McCloud transferred to Notre Dame, where he would prove to be a valued addition to The Fighting Irish’s secondary.  With McCloud’s recent Pro Day numbers, he deserves a look as a possible day three selection in the approaching 2021 NFL Draft.  McCloud is a lengthy press corner who has the ability to play with his hands.  Mixing these athletic traits with his competitive mindset and leadership skills could be the reason he’s picked in the 2021 NFL Draft.

This first clip is Nick McCloud’s lone interception from his 2020 season with The Fighting Irish.  They are playing Pittsburgh.  McCloud’s basically playing receiver here, as he sees the lobbed pass while side shuffling to his zone third.  All he has to do is jump and land with his feet inbounds for the interception.  A gimme for sure, but he still had to make the play.

This clip from Notre Dame’s 2020 game against Boston College displays McCloud making an excellent play on the football while it’s in the air.  Starting with outside leverage, he quickly opens up as the receiver cuts inside off the line.  Following a foot race (that McCloud is able to keep hands on in), McCloud is able to jump in front of the receiver at the last second to swat the ball down with one hand, denying a possible TD catch at the front of the end zone.

In this clip from the 2020 Rose Bowl featuring Notre Dame and Alabama, McCloud is guarding expected early-round wide receiver in the 2021 NFL Draft: DeVonta Smith.  McCloud (boundary side) does a good job of mirroring Smith’s release and staying on top of him vertically, but as Smith drops his weight and cuts back to the football, McCloud isn’t able to put on the breaks to close in time.  McCloud’s coverage really isn’t bad – Smith is just on a whole other level.

This clip is from 2019, when McCloud was a member of the NC State Wolfpack.  NC State vs. Eastern Carolina.  In this clip, McCloud displays good route anticipation in man (which he often shows) to recognize and get a break on the slant.  You can see his momentum shifting inside right before the receiver breaks, and as the pass is thrown, he’s positioned himself basically on the back of the receiver.  He does a good job of using his length to try and make the catch a difficult one, but despite getting a hand in at the catch point, the receiver is able to secure the catch with strong hands.  Can’t fault the effort on the coverage from McCloud.

This clip is from the same 2019 game.  Even though McCloud’s coverage isn’t fully shown in the broadcast view (he looks to be in a deep zone – 8 in coverage: 3 deep, 5 under), there is a main takeaway to be had from watching the play.  What’s noticeable about this clip is that McCloud quickly closes on the receiver and plays the ball at the catch point, disrupting the pass.  McCloud has made playing through the hands a habit whenever he is able to get in the vicinity of the receiver trying to catch a pass.

This clip is from Notre Dame’s 2020 game vs. Duke.  McCloud is in soft press boundary side.  He mirrors the receiver off the line, then engages with his hands.  The QB decides to give his receiver a chance, throwing a jump ball.  McCloud climbs the ladder and plays the ball at the catch point yet again, ripping it from the receiver’s grasp.  The ability to play through the hands in contested catch situations is one of McCloud’s strengths, as the last few clips make evident.

This is also a clip from Notre Dame’s 2020 game against Duke.  McCloud is in press boundary side and does a great job of squeezing the receiver to the sideline.  McCloud gets his hands on the receiver and ever so subtly navigates the stem of his route to the out of play area, collapsing the receiver’s space to work with, and also making the throw a difficult one for the QB to place.

This is another clip from Notre Dame’s 2020 game vs. Duke.  McCloud is in soft press coverage again at the top of the screen.  The receiver jabs to the outside accompanied by a head fake that gets McCloud to shift his momentum that way.  The receiver then bursts vertically, and McCloud is unable to get hands on him.  As he opens his hips, McCloud appears to stagger slightly, giving the receiver open space, which the receiver takes advantage of.  McCloud doesn’t stick with the inside break and begins to pull up on the play, jogging, before seeing the throw and trying to recover at the last second.  Not a great rep from him.

In this clip from Notre Dame’s 2020 game against Boston College, McCloud vacates his deep zone assignment, allowing a big play behind him.  Since he does not see anyone in his general vicinity, he decides to step up towards the check-down running back rather than keeping depth.  A receiver sneaks across the field into the open zone for a big reception.

This clip is from The Fighting Irish’s 2020 matchup with FSU.  McCloud (top of the screen, boundary side) has a free attempt at a tackle behind the line of scrimmage but misses.  He stops his feet, puts his head down, and whiffs at the attempt.  McCloud displays inconsistent technique when it comes to breaking down and being able to tackle with proper form.  He is too stiff at times and doesn’t consistently rocket towards the ball carrier’s thigh with a purpose.  If he makes an NFL roster, this is one of the main areas he will need to focus on improving.

This clip is another one from the 2020 Rose Bowl against Alabama.  McCloud is covering DeVonta Smith again, this time in the slot.  McCloud is playing Smith about five yards off with outside leverage.  With Notre Dame selling out to stop Najee Harris in the run game, McCloud has no inside help.  His feet are a bit slow, he doesn’t flip his hips until after he’s beaten inside, and he’s unable to plant his hands on Smith, so Smith takes the slant to the house for a touchdown.

While Nick McCloud is without polish in some areas of his game, his Pro Day numbers, as well as the positives he’s put on tape over the course of his collegiate career could be the reason a team takes a chance on him late in the 2021 NFL Draft.  Late day three is the time to roll the dice on prospects with good measurables and upside that can be worked with.  McCloud is one of those prospects.  A team with a man-heavy scheme may call his name come May.