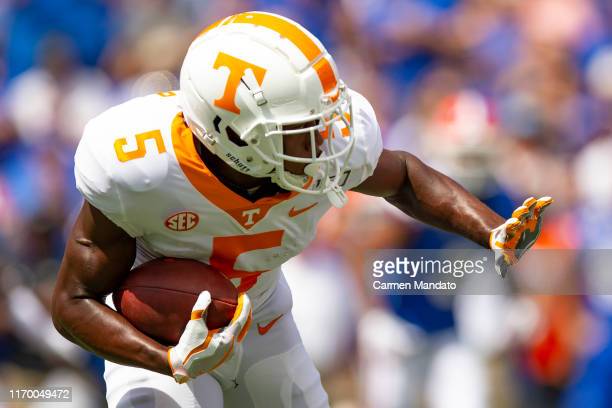 Another potential day two/three selection, with a ton of upside based on film study, is Tennessee’s Josh Palmer.  Palmer is a Canadian-born senior.  The stats he put up in his collegiate career are modest at best, having finished his 2018, 2019, and 2020 seasons in the 400 receiving yard range, and never having more than 4 touchdowns in a season, catching 4 in 2020.  However, Tennessee’s QB play didn’t do him any favors over the duration of his career.  On top of that, he was behind the likes of Marquez Callaway and Jauan Jennings (both made it to the NFL) on the target priority list early on.  While he seems to be lacking in true production statistically, Palmer has been a steady contributor throughout his career.  The stats only give a tiny glimpse of Josh Palmer’s game.  He’s a decently polished receiver with a bunch of great reps on tape, both in the passing game and run blocking.  Palmer also had a very solid Senior Bowl where he flashed his route running ability in one-on-ones and also caught a touchdown for the American Team.

Right into the good.  This first clip is from Josh Palmer’s first game in the 2020 season against South Carolina.  On this play, Palmer (out wide field side) is being covered by freshman Cam Smith.  Palmer quickly stacks him and keeps him an arm’s distance away as he tracks the ball to the right sideline of the end zone.  Palmer thrives on vertical routes.

Palmer also battled with (but was mostly kept in check by) top cornerback prospect Jaycee Horn at times during the game.  More on that later in the report.

This next clip is from Tennessee’s 2020 game vs. Georgia.  Another vertical route.  Josh Palmer (out wide field side) utilizes hesitation with an outside jab into a fake in-breaking route within his release that takes a little bit to develop, but he displays quick-twitch to draw the DB (D.J. Daniel – another solid corner prospect) in just enough so that he can run up the sideline (once Daniel’s momentum is slightly moving forward Palmer takes off).  Daniel does a good job of staying on top of Palmer deep, but Palmer’s tracking skills and jump-ball ability are on full display as he gives a little nudge to Daniel before jumping to snatch the ball out of the air with strong mitts.  A fantastic touchdown catch, despite solid coverage.

This clip is from the same 2020 game against Georgia.  Palmer goes vertical yet again.  He’s being covered by another good cornerback prospect in Tyson Campbell.  Palmer is out wide field side, lined up off the line just inside the numbers.  Post-snap, he takes a small skip/hop in his release before putting his head down and jetting up the sideline.  He does a good job of maintaining a direct path, so that he doesn’t give Campbell the chance to squeeze him to the sideline.  This gives Palmer’s QB enough room to place a throw that will allow Palmer to drift towards the sideline, thus giving Campbell no chance to make a play on it.  Palmer was initially ruled out of bounds, but the call was overturned as he does get a foot inbounds with possession, giving Palmer and the Vols a TD.

This clip is from the Volunteers’ 2020 matchup with Alabama.  Palmer is being covered by top cornerback prospect Patrick Surtain II (who he battled well).  Palmer is out wide field side, just inside the numbers.  He darts up the field immediately after some purposeful slow first steps off the line.  Like the last clip, Palmer maintains a direct path while hand fighting with Surtain II, so that he gives himself and his QB enough room to operate.  The ball is placed over the top, and Palmer tracks it over his shoulder towards the sideline where he’s able to fade over and make the catch before continuing out of bounds.

In this clip from Tennessee’s 2019 game vs. Missouri, Palmer displays the ability to fight through contact as well as his fantastic body control.  The DBs were playing physical this game.  Palmer received a pass interference call earlier in the game due to how grabby the DB was playing him.

On this play (being guarded by a different DB), despite being held, Palmer (top of the screen) is able to fight through the contact.  With the shallow defender immediately latching onto him in the stem of his route, Palmer utilizes a throw-by technique to try and move the defender off of him towards the opposite direction he’s going to stem his route, which is outside.  The defender sticks with him however, to which Palmer is able to fully break his route outside through dragging his leg and snapping his hips violently.  Now open, he locates the pass then jumps into a spin to snag the ball above his head near the sideline.

In this clip from the same 2019 game, Josh Palmer’s blocking foundation is on display.  Palmer is a willing blocker who looks to complete his assignment efficiently, and on a consistent basis.  He utilizes strong technique mixed with aggression when asked to block a DB on the boundary.  Along with blocking, Palmer will likely add special teams value as a later-round selection.  Both pluses for his draft stock and long-term outlook on an NFL roster.

In this clip, Palmer (top of the screen, boundary side) shows urgency to meet the DB and engage with his block.  He attacks the chest of the DB with his hands and maintains the block while driving the defender backwards, completing his assignment (even though the run didn’t go anywhere).  More of the same can be seen throughout Palmer’s film.

This link is for Josh Palmer’s 2021 Senior Bowl one-on-one reps.  Palmer had a very good Senior Bowl.  In these one-on-ones, he displays his promise when it comes to route running, as well as his ability to fight through contact, and his reliable hands to secure contested catches.

In this clip from Tennessee’s first game of their 2020 season (vs. South Carolina), Palmer (top of the screen, boundary side) is being guarded in press coverage by Jaycee Horn.  This is an example of Palmer lacking explosion off the line of scrimmage, which happens at times.  Jaycee Horn is an extremely athletic corner, and he’s able to stay on top of Palmer’s route while keeping his hand on his shoulder and running upfield with him.  While we can’t see the full extent of his route on the play due to the broadcast view, this is something Palmer could struggle with at the NFL level, especially when being guarded by big, athletic press corners.

This clip is on the long side, but it’s back to back plays from Tennessee’s 2020 matchup with Missouri.  Like the last clip, Palmer (top of the screen) is being pressed on both plays.  He struggles to get off of the press on both plays (he’s being guarded by true freshman corner Ennis Rakestraw Jr. – Rakestraw Jr. stood out to me in this game, he made some impressive plays).  Reps like these show examples of why I think Palmer can work to refine and perfect his release packages, specifically focusing on the nuances of his footwork.  He is able to fight through contact, but since he isn’t the quickest receiver ever off the line, he should work towards being able to consistently beat aggressive press DBs with his footwork.  By better selling his intentions to the opposite direction he’s trying to stem his route (through setting the DB up utilizing footwork), he will buy himself more room to work with off the line in press situations.

Josh Palmer is a wide receiver whose pro career should be more successful than his college career.  Palmer’s stats do not tell the full story when it comes to his projection for the pro level.  The recent 2021 Senior Bowl is a testament to that.  There, he flashed his potential that will have NFL franchises examining his tape very closely.  In it, they will see even more flashes of potential.  While he won’t be one of the top receivers selected in the 2021 NFL Draft, I do believe he could be a part of the middle pack, where the Canadian-born wideout will then look to make his mark on the 53-man roster of the franchise that selects him.  I think he should be able to do just that.