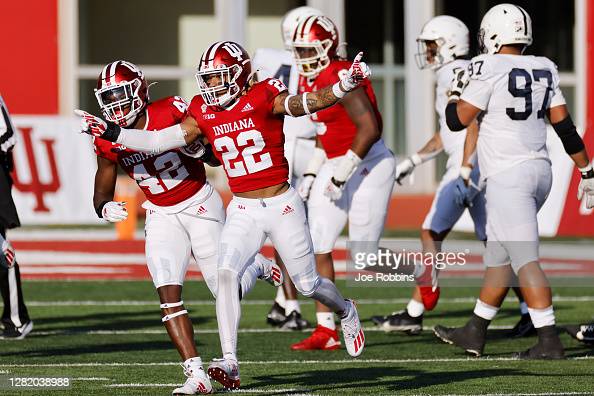 -Fairly explosive player (35” vert) in terms of leaping ability with average play speed
-Has pretty good short-area quickness to react to plays around him
-Comfortable moving in a backpedal both in coverage and when freed up as a safety
-Versatile player that has lined up in the nickel, deep half, single high, and in the box
-Possesses great eyes for the position and instincts to be in position to make plays
-Does a great job opening up his hips in transition to a backpedal and when needed to commit to one size when playing deep safety
-A natural at undercutting the route by playing the QB’s eyes from the backfield, reading the progression and either jumping the route or running to the spot where the ball is going
-Has a fair amount of ball production in a short sample size
-Can carry backs and TEs vertical up the seam and along the sideline
-Active around the LOS as a willing tackler that will come up and hit you
-Capable blitzer off of the edge from the nickel position
-Can take on backs and tight ends in the run game or when asked to pass protect working through their block or around them to the ball
-Plays with a lot of effort and hustles to the football in pursuit
-Only growing with more experience playing a variety of roles on defense

-Has respectable, yet not great long speed for the secondary (4.60 40)
-Needs to improve wrap-up consistency on his tackle attempts
-Want-to as a hitter can be spotty at times, relying on diving tackles or arm tackles rather than going through the ball carrier
-Can be a tad slow to break on the football when transitioning from moving backward to forward
-Has ball security issues, losing the ball and not tucking it away when he gets a takeaway
-Limited experience as a starter on defense (nine starts in three seasons)
-A lot of his ball production came on bad decisions by the passer or loose ball security by the runner
-Has been ejected in a game (Michigan St.) for getting into a fist fight

-Junior prospect from Sarasota, FL
-Contributed as a defensive back, rusher, receiver, and return specialist for Riverview HS
-Also a big track athlete in HS, participating in the 110m hurdles, long jump, triple jump and 4x100m relay
-Played in 10 games as a reserve and on special teams, recording two tackles, one interception, one pass breakup in his freshman season
-He started once in 13 appearances as a sophomore, posting 25 tackles (18 solo), 4.5 for loss, with three sacks, two interceptions (one returned for a score) and two pass breakups
-Stepped up in a big way his junior campaign, tying for the team lead with four interceptions, breaking up four other passes and posting 43 tackles (33 solo), 3.5 for loss, and one sack
-Second-team All-Big Ten in 2020

Jamar Johnson from Indiana is a little-known safety prospect that hasn’t generated the same hype as some other names in this draft class but deserves to be in the conversation as one of the better prospects at the position as we roll cover to the 2021 NFL Draft. Johnson, a true junior, only has nine games of starting experience under his belt for the Hoosiers but has made quite an impact during his time as a starter and role player in Bloomington. Johnson is a versatile defensive back that is able to line up in a variety of positions, ranging from nickel cornerback to box safety, single high safety, and also as a deep half defender. Johnson’s skillset as a jack-of-all trades makes him very useful to a defense, being able to be deployed to utilize mismatches in coverage or against the run. Take, for example, this play against Penn State where Johnson in on the edge of the defense on the short yardage situation. On the snap of the ball, he uses his pursuit and speed to turn the corner into the backfield, reading the option play and striping the ball out of the QB’s hands for the big fumble recovery by the defense.

Johnson is a good option to have close to the LOS with his ability to read and diagnose plays effectively with his eyes and his instincts. He has a natural feel for where the ball is going and is quick to pursue to get in position to make a play. Here is an example against Rutgers where Johnson sniffs out the WR screen play from the safety spot, quickly coming downhill and getting into position to make the tackle for a loss on the play.

Johnson has good play strength and plays with a motor to pursue the football if sent on the blitz. Here against Ohio State, blowing up #33 Master Teague tasked to block Johnson and works right off of the block and into the lap of #1 Justin Fields for the sack.

While he is good near the LOS, some of Johnson’s best work comes when detached and allowed to roam as a deep safety in coverage. As stated earlier, his eyes and instincts are impressive for a player with as little of experience as he does, but able to read the QB’s eyes as he goes through his progressions and either jump the route or maneuver to the where the ball is being thrown. Watch here against Penn State when Johnson recognizes the ball coming out and breaks to the point, catching the overthrown pass for the easy INT.

Here’s another great example vs Ohio State where Johnson is playing as a deep center fielder, commits to his backpedal, and reads Fields’s eyes as they go from right to left. This takes Johnson straight to where the ball is being thrown, undercutting the route for the interception.

Johnson is also a very capable cover man in the slot, being able to carry backs and TEs vertically up the seam and along the sideline, staying in-phase with them stride-for-stride. Here against Purdue, Johnson sticks with the receiver in the slot on the vertical deep over concept, staying right on his hip pocket and picks his change in the end zone, high-pointing the football and taking it back the other way.

Now Johnson lost the ball on this play but was ruled down by contact. There have been several times where Johnson intercepts a pass yet loses the ball by getting stripped and needs to hone his ability to secure the football after creating the turnover.

Along with ball security issues, Johnson needs to become a more consistent wrap-up tackler. The want-to is there, as he isn’t shy from contact, but too often he gets caught trying to dive or arm tackle and opponent rather than running through them. Like here on this play where Johnson has a clear shot at the QB running out to the right after keeping the option handoff, but tries to reach out and arm tackle him, resulting in Johnson overrunning the QB and whiffing on the play.

Another example where Johnson is coming free on the blitz up the middle and has a chance at another sack of Justin Fields, but takes a bad angle and Fields sidesteps him, breaking out of Johnson’s attempt at a diving arm tackle.

While Johnson is a good athlete in his own right, his vertical speed isn’t the best when asked to pair up with burners in the slot at WR. Along with that, he can be a little slow to click-and-close on the ball coming out at times. His instincts are good, as his eyes will be in the right place, but his feet need to take him there. This is shown on this rep where Johnson sees that the ball is coming out quick, but stops his feet after committing to the backpedal, pausing with his feet in space and waiting for the ball to be thrown before reacting to what is happening in-front of him.

Overall, there is a lot to like in Johnson’s game as a versatile chess piece that can move all around the field. He needs to clean up his tackling consistency and trust his eyes more when breaking on the ball, but those are concerns that will likely be cleaned up with more coaching and flat-out more experience. Johnson is a younger player who is only growing into himself as a defender and has the upside to be that nickel/safety hybrid every team is looking for in today’s pass-heavy league. When looking at pro comparisons Patrick Chung of the Patriots came to mind as a versatile playmaker that New England used in a variety of roles with similar size, athletic measurables, and scheme versatility to wear a lot of hands in a secondary. Should Pittsburgh be looking to address the nickel position and add safety depth, Johnson could potentially be an answer to both of these issues, playing a similar role to Cam Sutton who has moved all over the defensive backfield. With more reps and experience, Johnson can develop into a solid contributor and starting-caliber safety in the league.