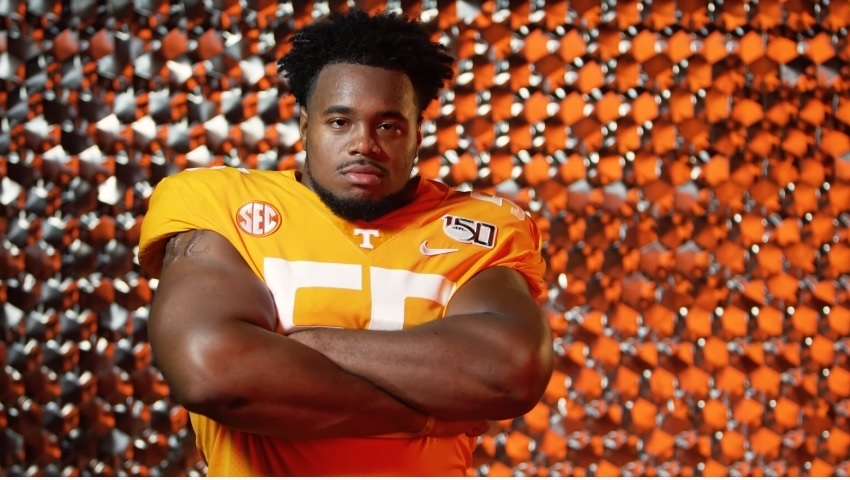 A couple weeks ago it was reported that the Steelers had virtual contact with the center from Tennessee, Brandon Kennedy. He certainly has the smarts with three degrees between his time at Alabama and Tennessee. He has started the last two seasons at center, and is a good communicator before the snap.

As a pass blocker, he has solid quickness out of his stance and gets into his set quickly. When he keeps his hands inside he can get a solid push on rushers to ride to the outside. He has a solid anchor to handle power rushers. When uncovered he will look to help teammates and attempt to help with the rusher.

At South Carolina, he handles the initial push and when he feels the advantage he uses his legs to drive the defender away from the QB.

Against Missouri, he overreaches with his left hand and initially gets knocked back, but is able to reset and anchor.

As a run blocker, he has good quickness out of his stance and is most proficient on Power blocks.  He has good pad level and leg drive on down, combo and double team blocks, able to get good movement on the defender. He has solid agility to climb to the second level and can handle blocks in front of him.  In base blocks he has solid hands and play strength to stalemate one on one. On Zone blocks he gets a good push to the outside to open up a lane behind him.

Against Missouri, he uses good pad level and leg drive to drive the DT to the outside, opening up the hole behind him.

Against Alabama, he climbs to the second level and gets in a good position to wall off the defender.

Another Alabama play, he shows good quickness to get in front of the 0-tech and stalemate to allow the runner to cut behind him.

Yet another Alabama play, he will join the right guard to get a good push on the DT. Once the guard climbs, he uses good leg drive to control the block.

When pass blocking, he doesn’t move his feet laterally to mirror blockers. His hands are too wide, not allowing him to control defenders, and he is marginal at countering with his hands. He has marginal patience with his hands, leading him to reach with his punch which also leads to his punch not having much effect. His lack of footwork leads him to bending at the waist and falling off of blocks.

On screens he has adequate agility, timing and change of direction to get in front and secure a block. He has marginal awareness on twists and stunts. On Zone blocks, he is adequate getting across the face on reach blocks. He leans into his blocks and gets grabby when he starts to slip off. He needs to keep his feet under him on second level blocks. Kennedy needs to add core strength, drop his hip to not get twisted by defenders, and the hand strength to sustain blocks. He had several false starts, especially when the defensive line shifted.

Here is a look at his feet against Missouri. When the rusher goes to his left, he never moves his left foot to attempt to get in front of the defender, causing him to bend and end up on the hip of the rusher.

Against Texas A&M, against a three man rush when he looks to get a push on the rusher, he ducks his head and misses with his hands, allowing the defender to get in on the tackle.

Overall, Kennedy has solid snap quickness and a solid anchor on pass plays. As a run blocker he plays with good pad level, leg drive and can get a push on Power blocks and outside Zone blocks. Areas to improve include overall play strength and hand strength to sustain blocks, as well as footwork, patience and countering with his hands and keeping his feet under him run blocking on the second level.

Kennedy has the intelligence and understanding you look for in someone to man the middle of your offensive line, but the physical abilities don’t match up at this point.  A team could stash him on the practice squad, get him to add strength and work on his technique, and he could fit in a Gap/Power run scheme. The Steelers have an immediate need at the center position, and Kennedy is not ready to fill that role. He could be an addition to the practice squad.

Games Watched:  2020 — At South Carolina, Vs Missouri, at Georgia, vs Alabama, Vs Texas A&M