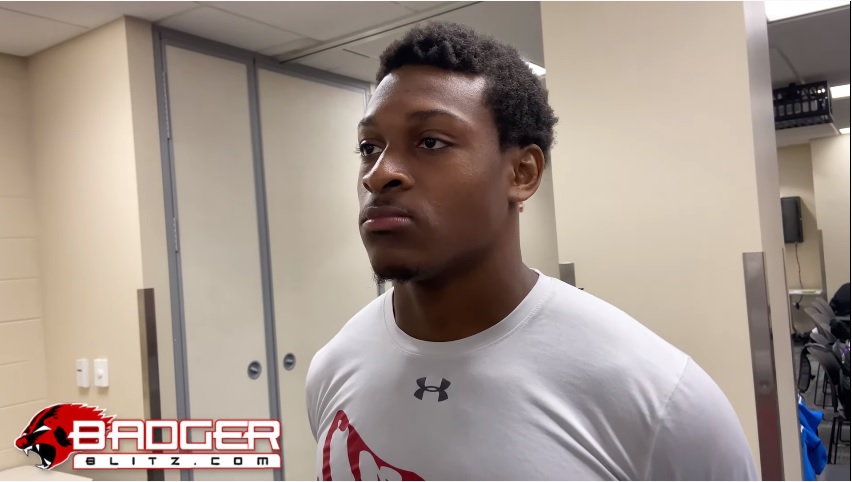 Besides being on the 2021 NFL Draft’s All-Name Team Rachad Wildgoose Jr. is one of the most intriguing defensive backs in this year’s class.

His 40-yard dash would have been in the top ten at last year’s combine, as well as his 10-yard split. It would have been among the best by a cornerback in Indianapolis in 2020. Jeff Okudah, the third overall pick to the Detroit Lions in 2020, had the fastest cornerback 10-yard split last year, clocking in 0.02 seconds faster at 1.47. Wildgoose also set personal records with a 120-inch broad jump, a 36-inch vertical jump, and a 7-second 3-cone time. To round off his day he threw up 11 reps on the 225-pound bench press.

The first game I watched of Wildgoose was his 2020 game against Illinois. He was matched up with Josh Imatorbhebhe, one of draft twitter’s favorite sleepers at the receiver position, much of the night. Through the course of the night, Wildgoose was able to limit Imatorbhebhe to only three catches and 26 yards.

You can see in the below clips, Wildgoose was in Imatorbhebhe’s side pocket all game. Truly an impressive outing in 1 of only 2 games Wildgoose played in 2020 before shutting it down due to a shoulder injury.

Wildgoose also lives up to his name. He’s not afraid to come up and smack you in the mouth. Watch how quickly he diagnoses this screen and closes on the ball. This is a play where he not only has to recognize what’s going on in front of him but trusting himself and reacting to it. Great finish.

Despite what you might think the following clips below are actually two different plays. They happened only 1 minute from each other in a game against Northwestern. Again, Wildgoose reads and reacts to what he sees in front of him and beats #66 to spot on 2 straight screens to light up the tailback.

My favorite part of Wildgoose’s game is his physicality and not being afraid to put his hat on the ball in run support. When evaluating cornerbacks that may fit the Steelers scheme I always try to lean more to guys that are more physical players than finesse ones. Wildgoose certainly fits that bill as his tape has plenty of reps of him making great plays in the run game.

One of the most important things as a nickel corner, especially in Pittsburgh, is having the ability to blitz. While you would have liked to see Wildgoose complete the sack here, what I like to see from him is there’s no hesitation in his blitz at all. It’s full go which is, in my opinion, what separated Mike Hilton as a blitzer compared to that of Cam Sutton. Need that wreckless abandon, just finish the play.

Switching over to more coverage clips of Wildgoose we’ll go back to the Illinois game matched up with Imatorbhebhe. Wildgoose shows good patience at the snap, not lurching in either direction. Then, he has a good lead step and fire feet before giving the receiver a two-hand jam, flipping his hips and keeping him in his side pocket. The thing I love about his rep is the end, just before going out of the screen, you can see Wildgoose consciously looking to defend any sort of back-shoulder type throw. Great rep, no way he was allowing any throws in his direction on this snap.

In the below clip, you get to see Northwestern actually throwing a back-shoulder throw at Wildgoose. He’s again looking for it and plays through the receiver’s hands for a pass breakup.

In this clip, Wildgoose is lined up over the slot at the top of the screen. You can see his patience as the receiver closes out. Wildgoose shows good awareness as clearly knows where the sticks are and what to expect in this situation. You can tell he’s anticipating the comeback, and that’s exactly what he gets. He closes and ensures the incompletion.

While Wildgoose is certainly an intriguing prospect, he has a few warts in his game as well. The biggest one being his penalties. He has drawn 12 penalties over the course of his career, oftentimes due to his physical play and getting a little too handsy. This call probably could have gone either way, but Wildgoose is in a great position, no reason to grab the shoulder pad of the receiver, giving the referee a reason to throw the flag.

This part of Wildgoose’s game is what scares me the most as he transitions to the flag-happy NFL where defensive backs are under the microscope when covering receivers. Definitely, something that will need to improve by the time it comes to play on Sundays.

As with any aggressive defensive back, it can be a double-edged sword. Here, Wildgoose gets caught with his eyes in the backfield on the reverse and leaves the receiver wide open on the trick-play pass.

The last thing I’ll mention is more times than not Wildgoose is an aggressive tackler, coming up and sticking his face in the fan. However, there were a handful of times where for whatever reason he became passive in coming up to tackle and the results just look bad, leaving him looking like a deer in the headlights. I think the instances are more flukey than who he is as a player but leaves you scratching your head a few times on film.

Here, against Nebraska’s option, he comes up to the play and stands to the side as the quarterback runs by him. Wildgoose isn’t even able to lay a hand on him. It turns what should have been roughly a seven-yard gain into a 30-yard explosive play.

Rachad Wildgoose Jr is still a pretty raw player who I think could have a high ceiling as a nickel cornerback in the NFL. From what I saw on tape, I definitely think he could have benefited by going back to school and developing his craft for one more year. He would be a guy that is going to have to prove it in camp in that nickel spot as well as special teams to claim a roster spot.

He showed at his pro-day that he is clearly athletic enough for the NFL. The question is if he can put it all together and continue to crash through his own glass ceilings. With the Steelers needing a starting nickel cornerback after the loss of Mike Hilton, if they don’t decide to a nickel, earlier in the draft, Wildgoose would be a very intriguing name for the black and gold from the 4th round on.