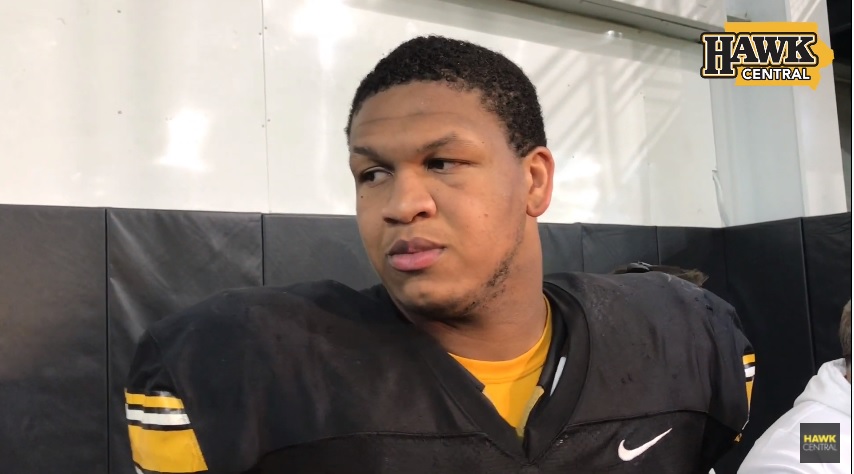 – Acceptable arm length for the tackle potion (33 7/8”) combined with the height and mass you like to see
– Four-year starter on the blindside for a team that prides itself on its play in the trenches
– Pretty quick out of his stance in the run game, firing out into his blocks
– Fairly mobile in space for a bigger guy, being able to climb to the second level after combo off with the guard, or getting out in front as a puller
– Size and power make him a viable down blocker on backers or defensive linemen on the inside to clear outside running lanes
– Does a good job on kick-out blocks to displace the edge defender to the sideline, creating a running lane
– Best utilized on the quick set where he gets his hands on defenders quickly, locking onto their chest and using his size to be difficult to get around
– Size makes him difficult to maneuver around on quick passes

– Below average athlete at the position in terms of speed (5.38 40) and explosiveness (25” vert, 103” broad)
– Can have trouble working laterally and changing direction fast (4.97 20-yd. shuttle, 7.70 three-cone)
– Lacks key upper body strength to stonewall defenders at the LOS
– Appears to have reached his ceiling in terms of athletic potential and development
– Foot speed and inconsistency in vertical pass sets make him a liability to set a deep pocket
– Can have trouble with his punch consistency landing on target in his vertical pass sets
– Falls off of his blocks too fast at times, either missing completely or not blocking until the whistle
– Will struggle handling speed around the edge and lacks the functional strength to anchor in against power rushers
– Contact balance isn’t great due to lack of base and irregular steps in pass protection

– Redshirt Senior prospect from Detroit, MI
– Originally born in Windsor, Ontario, Canada
– Played offensive and defensive line as a H.S. athlete and also participated in prep basketball, soccer, baseball, and track
– Redshirted his first year on campus in 2016
– Started at left tackle for 12 games to earn Freshman All-American accolades after the pre-season starter went down due to injury
– Started 12 games at the left tackle spot his sophomore season
– Suffered a knee injury as a junior that limited him to 10 starts, missing three games
– Switched to a vegan diet and lost body fat in lead-up to play better his senior season, where he recorded eight starts at LT
– Academic All-Big Ten and first team freshman All-America in 2017, second team All-Big Ten in 2018, third team All-Big Ten in 2019, second team All-America and first team All-Big Ten in 2020
– One of nine seniors named to 2020 Leadership Group
– 42 career starts, all at left tackle, starting every game he played in during his career

Alaric Jackson of the Iowa Hawkeyes is often referred to as the second fiddle of bookend tackles that the Hawks were blessed to have man the trenches for the past few seasons. With Tristan Wirfs being taken early in last year’s draft and playing at an All-Pro level in his first season, he has fit the mold of Iowa offensive linemen that are well-developed and pro-ready from the time they enter the league. Having been a starter in 42 games for the Hawks, one would suggest Jackson is the next in line for such a transition. However, after analyzing his tape, he may have a tough time making an immediate impact.

Having worked with Jackson for the entire 2019 spring with Iowa Football’s strength and conditioning program, I grew to know Jackson as a mild-mannered, respectful, hard-working man that was extremely respectful to coaching and carried about his business like a professional. When turning on the tape, you see a lot of good qualities in Jackson that are staples for Iowa offensive linemen.

The first thing that pops on the screen is his quickness off the ball in the run game. For being over 320 pounds, he is quick off of the ball and into the defender across from him, getting a good initial punch and drive up front. On this play at the Senior Bowl, Jackson aligns at LT and fires out on the snap, squeezing through the line to pick up linebacker Jabril Cox and drive him back five yards, clearing a path for the runner to get into the end zone.

Here is another example from this past season against Purdue where Jackson is quick out of his stance, immediately driving back the defender off the ball with a good push, then turning his shoulders at the end to create a seal on the right side.

Prior to the 2020 season, Jackson decided to remake his body and cut down on excess body fat to move better. He was definitely a sloppy body when I was there, and you can tell the difference in his frame from 2019 to 2020 tape. However, even in 2019, Jackson still moved pretty well in space and when asked to get out in front in the run game. Watch on this play against Wisconsin where he square pulls to the left, leading the way to pick up a defender coming to the edge and sealing him off from the runner.

Jackson’s size and quickness out of his stance help when asked to perform kickout blocks on edge defenders. Here in the same game, Jackson shoots to the defender’s shoulder, driving him to the sideline to clear the outside for the back to run.

He does a great job when asked to combo off to the backer and work to the second level of the defense. Here on this rep, Jackson aligns at RT and washes the defensive lineman down on the combo block with the guard, then leaves to pick up a backer to spring the runner in the second level for a nice gain.

Jackson is best utilized when asked to quick set and get his hands on the defender quickly, rather than vertical setting. His size and length make him difficult to get around, and his hand placement when on target is difficult to break from on the rush. See this rep, where Jackson correctly gets good hand placement on the rusher’s chest with good hip bend to move laterally with the defender to give his QB time to throw.

However, Jackson’s greatest weakness is his footwork, or lack thereof. He is extremely inconsistent in his pass sets, especially when setting vertically, and can struggle with standing up too high too fast, losing balance and being easily displaced, as you can see on this rep against Purdue.

He brings his feet too close together on his kick slide and doesn’t cover much ground. This leaves him susceptible to being beaten around the corner as well as allowing defenders to cross his face inside if he over-sets. On this play, Jackson’s feet get too narrow and he over-sets, allowing the defender inside and to plant #7 Spencer Petras into the ground as he releases the ball.

Again, another play where Jackson is too upright and plays with no rhythm in his pass set, bringing his feet too narrow and allowing the defender to swim back inside into the lap of the QB.

Jackson also has a bad tendency to either whiff on his block or not stay engaged with his block to and through the whistle. Whether it be ability or effort, there are too many times where he is standing around looking at his back or the QB taking a hit from the defender he was in charge of blocking. A good example is here against Purdue where he fires out well for the run play, but completely whiffs on #55 Derrick Barnes, allowing him to get in on the play.

Overall, I love Jackson as the person, and his personality and work he puts in makes you root for him as a long-time contributor to a prestigious group over the past few decades, as far as offensive line units go. However, his physical limitations as an athlete, coupled with his poor footwork, make him a bit of a liability on the outside. Should he be able to continue his body transformation and work on his inconsistent play with his feet, he would best fit likely in a zone-based scheme where the ball comes out quick in the passing game and he can work to a landmark in the run game.

A potential move to guard given his inconsistencies and lack of upside at tackle may be in the works for him given his strengths as a run blocker and ability to move out in space given his size. Jackson reminds me a lot of another offensive lineman I got to work with a lot at Florida, Martez Ivey, who played LT for the Gators, but started his college career at guard and made the move to the NFL back to guard given his physical and technical limitations playing on the blind side. Both have great length and size, are high-character dudes that are better run blockers than pass protectors, and are probably best suited for inside duties due to weaknesses in their game.

Should the Steelers look to wait on tackle in the draft, Jackson could be a fall-back option, or a potential camp signing should he not get picked by a team. However, given the need of offensive line talent, it may be hard-pressed to suggest Jackson as a possible target at this time.