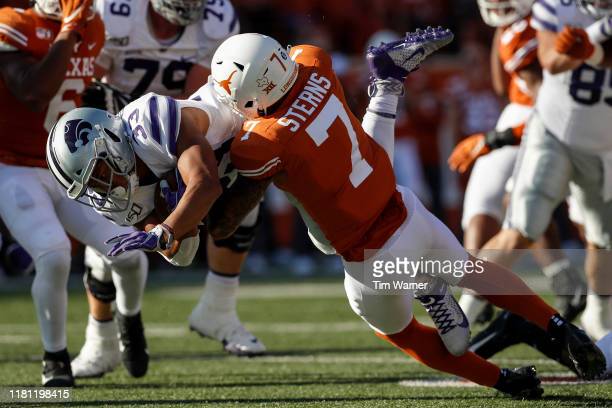 Caden Sterns’ outlook for the 2021 NFL Draft is thought-provoking. As a five-star recruit out of high school, Sterns’ name generated a lot of chatter and hype after an impressive freshman season in 2018. However, he didn’t seem to build upon that season in 2019 or 2020 (he did show improvements in certain areas of his game in 2020, however), leaving his draft range difficult to pin down. Sterns didn’t have the ball production in 2019 and 2020 that many had hoped for, and he also missed games due to injuries. Despite this, Sterns still offers value as an upside safety prospect in the 2021 NFL Draft. With impressive Pro Day numbers and athleticism that does show up on tape, an NFL franchise will likely take a chance on him with the ambition that they can coach him up to reach his full potential as a defensive back.

This clip is from way back in 2018, Sterns’ freshman season, Texas vs. TCU. Caden Sterns snagged two picks in this game, this clip being the first of the two. Pre-snap, Sterns rotates back to the deep middle of the field.  When the ball is snapped, Sterns stays patient and keeps his eyes in the backfield as the play develops. As the receiver who motioned across the formation receives the backwards pass then winds up to throw a pass himself, Sterns is ranging over to cover the receiver on the top of the screen that faked a block before continuing upfield to open space.

Sterns is then able to jump in front of the pass and get his feet inbounds for the interception. Great awareness and recognition from him here. He isn’t fooled by the fake and maintains patience to let the play develop in front of him, before making a play on the football.

This next clip is Caden Sterns’ second interception during the same 2018 game against TCU. Sterns rolls down to the middle of the field post-snap and lurks, while reading the QB’s eyes. The QB must have missed Sterns, because he decides to put a throw on the slot receiver (bottom of the screen) that runs across the middle. After jumping the pass, Sterns immediately looks to get upfield in order to make something happen on the return. He shows a bit of elusiveness (played some wide receiver in high school) and vision to evade a couple would-be tacklers in the open field while finding a path to continue on the return.

This clip is also from Sterns’ 2018 season, Texas vs. Baylor. Another interception. Sterns is in a deep zone at the top of the screen (left side of the field), and he reads the QB’s eyes as he’s staring down the left side of the field.  This allows Sterns to get a good jump on the throw to the sideline, which he’s able to range over to, jump, pick, then land inbounds for the interception.

This clip is from the Longhorns’ 2018 game vs. Iowa State. Sterns isn’t fooled by the jet motion run fake flowing the opposite direction. He stays disciplined, sees the handoff to the running back for a counter run, keeps his feet moving quickly, and then strikes to make a fundamentally sound tackle behind the line of scrimmage for a loss.  Sterns also had a sack in this game.

This clip is from Texas’ 2019 game against Utah in the Alamo Bowl. Sterns spots, then puts a shot on the tight end who motions across the formation and catches the short pass behind the line of scrimmage. Sterns stays in-phase running with the tight end towards the sideline, then triggers down and fires at his hip area with his shoulder, knocking the TE down behind the line for a loss.

This clip is from Texas’ 2020 matchup with Texas Tech. Sterns seals a Texas overtime win with an interception. It’s an errant, forced (obviously — it’s fourth down in a win-or-go-home situation) overthrow, but Sterns showcases his leaping ability and hands to high-point the football, then land with his feet inbounds. Here, Sterns comes up big in the final moments of the game.

This clip is from Texas’ 2019 game against Louisiana Tech. Post-snap, Sterns begins moving towards the middle of the field, reading the QB’s eyes to see where he wants to go with the football. As he notices the leaking running back and the QB staring the RB down, Sterns shoots up to make a tackle as the pass is being thrown. He wraps the RB up and drives him backwards, allowing no extra yardage after the short reception.

This clip is from Texas vs. TCU, 2020. In the red zone, Sterns reads the rub/pick route between the receiver and tight end who began the play lined up off the line. Sterns stays put, then dives out in front of the pass to the tight end which results in an incompletion. Good recognition.

Doing some studying of #Texas Safety Caden Sterns and I found this video of him matched up against Jaylen Waddle in the U.S Army All American Game and getting an interception.pic.twitter.com/hS2UGVMtog

This Twitter clip from Devin Jackson displays Sterns holding his own against one of the top expected 2021 NFL Draft early-round WRs: Jaylen Waddle. Sterns is able to shadow the extremely athletic Waddle, staying in his hip pocket until he gets his head around to locate the football, then Sterns shows some impressive closing speed before diving for the pass, intercepting it. This was from the U.S. Army All-American Bowl back in 2018, WR vs. DB reps. Sterns has the versatility to be a capable man defender.

In this clip from his 2018 game against Baylor, Sterns is outrun by the receiver who caught the in-breaker in front of him, resulting in a big play for Baylor. Playing over the top, Sterns is late to react and doesn’t get a jump on the route despite it being the only threat in his general area. This is something to watch with Sterns. While he does have very good range due to his athleticism, he tends to play more reactive than instinctive. If he’s able to play with calculated aggression in coverage, he will definitely be able to force more turnovers. Doing so would also take his game to the next level. Sterns has shown flashes.

This clip is from Texas’ 2020 game vs. Iowa State. It depicts the inconsistencies Sterns has put on tape in his career, when it comes to tackling from a fundamentally sound standpoint. On this play, he’s the last line of defense as the deepest DB, but he doesn’t show much urgency to reach the wide open receiver and bring him down or force him out of bounds. He dives low without much effort, and the receiver is able to spin into the end zone for six. Not a great tackle attempt.

This clip is from Texas’ 2019 game vs. Louisiana Tech, focusing on Sterns’ tackling again. Here, he’s a bit upright, he stops his feet, then he lunges/falls forward without any real power and grasps for air with his arms. Can’t fully put this on Sterns, though, because his teammates came in late and almost took him out, instead of the ball carrier. While these reps tackling do show up at times when combing through Sterns’ film (over his entire career), he displayed some good technique on open field tackles/tackles in space in 2020 (even though the last clip was from 2020). Sterns has displayed the ability to wrap-up in a fundamentally sound fashion, while also doing so with force to quickly bring the ball carrier down; he just needs to be consistent.

I don’t think the NFL team that drafts Caden Sterns should ask him to contribute immediately (other than on special teams), but he does have developmental upside that an NFL franchise should be able to work with. He has the athletic testing numbers not many safeties have, but he needs to play more instinctively in coverage, while also needing to achieve consistency (from a tackling perspective as well). Sterns does not have the ball production to match his athletic testing numbers.

Playing instinctively/aggressively should allow him to defend more passes and force more turnovers, which he does have the ability to do (consistently playing instinctively is something that is difficult to learn as a safety though. It’s more of a feel thing, which is why some safeties have the ability and some don’t). If Sterns is able to put it all together, he could provide a great return on investment down the road. Due to his projected draft range, a franchise looking to select Sterns in the 2021 NFL Draft will likely be a team with a solidified secondary, thus having the luxury of being able to take their time to develop him, with the hope that he will become a versatile, ball-hawking free safety in the future.