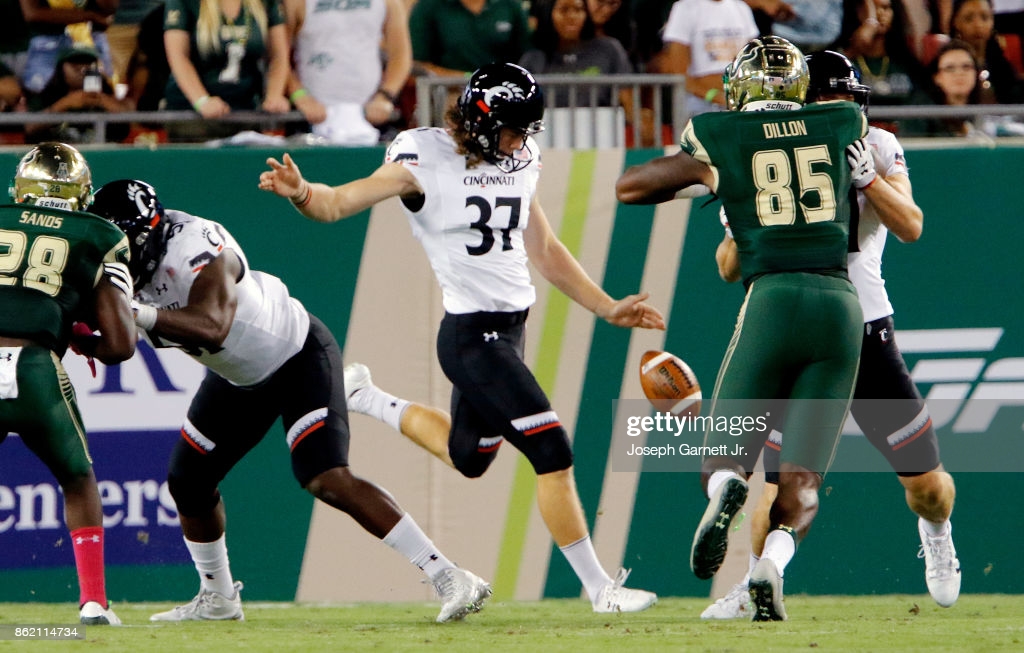 – Great size in terms of height/weight
– Lots of starting experience
– Quick operation from snap to punt, flashed some very quick times
– Regarded as an Aussie punter but has experience with traditional/spiral punts
– Left-footed punts could present challenges to return men
– Did very well to avoid touchbacks (1% over first three years, just two of 195 punts)
– Experience as a holder

– Smaller hand size (8 7/8 inches)
– Average was rarely great, eclipsed 44 yards just once
– Leg strength is average to below, didn’t see many 50+ yarders of air distance in punts studied
– Inconsistent punter, had some terrible boots, and really struggled in Senior Bowl showing
– Below average Inside 20 rate (34.9% – 82/235)
– Much older than typical prospect, though matters less for the position

James Smith will be the final punter we break down before the 2021 NFL Draft. He’s generally regarded as the top punter in this class. He has a big frame and though he’s an Aussie who played Australian Rules Football like Kentucky’s Max Duffy, I saw a lot more “traditional” punts from Smith than I did Duffy.

Smith has a quick operation and the benefit of being a left-footed punter, the only one of the four I’ve studied. That can produce a different spin on the ball that returners aren’t used to. It’s not a game-breaker, but it’s something working in his favor.

That quick operation is helpful when you’re backed up in your own end zone. In 2019 against Ohio State, standing underneath the goal posts, he gets this punt away in just 1.6 seconds. A very good time. The distance isn’t amazing but it’s acceptable for the circumstances, 41 yards, with a solid 4.23 seconds of hangtime. Overall, making the best of a bad situation.

But when I watched him, and I’ll admit my sample size is relatively small, I didn’t get the sense he’s the draft’s best punter. His numbers overall weren’t great. Here are the key metrics I tracked him.

The snap-to-punt and hangtime numbers are in line with the others, but the distance is much worse. Some of that has to do with his extreme struggles at the Senior Bowl. He had two punts and neither of them were good. One when 26 yards, the other 30 yards.

That’s a bad showing in a high-pressure, spotlight moment like that. And I think that’s going to hurt him.

I don’t see any aspect where Smith shines. His inside 20/placement rate was average to below and his leg isn’t anything to write home about. In just one season did he have an average above 44 yards. Duffy did it three times (in all three of his seasons), Harvin did it three times, and Chrisman also did it three times.

Just not seeing enough “wow” with Smith to entertain drafting him. But it sounds like there’s decent odds he’ll be the first punter off the board. However, when it comes to the position and the draft, the outcome is often unpredictable.