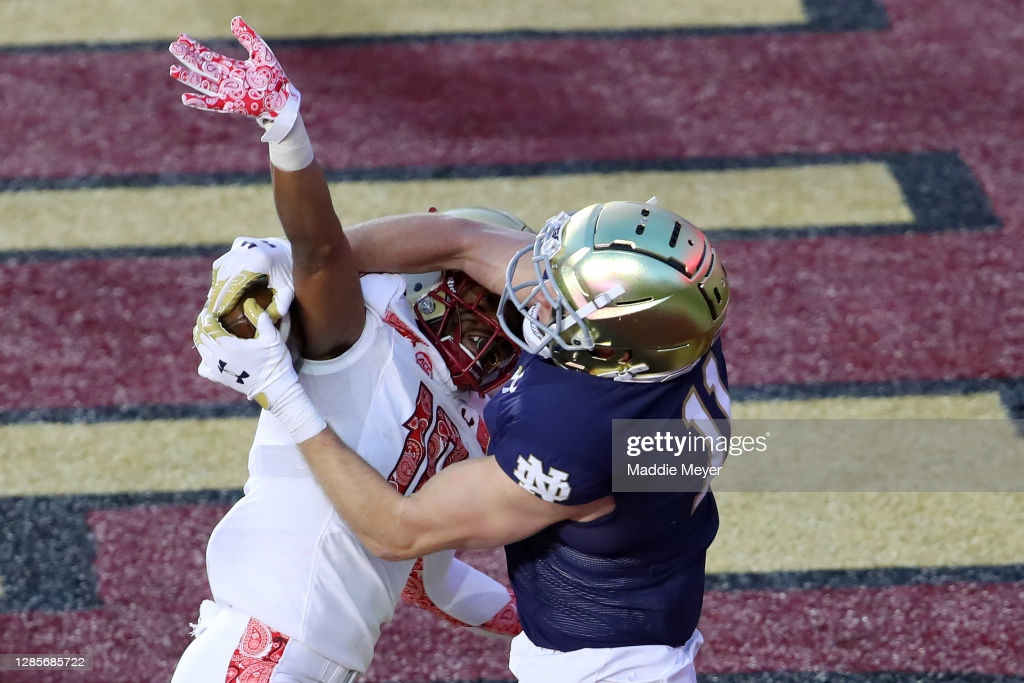 – Long-limbed receiver that can win in contested catch situations
– Flashes strong hands and plucks the ball out of the air consistently
– Can threaten vertically with enough juice to scare defenses
– Large, wide catch radius for the position
– Good overall body control to adjust to the ball in the air
– Size helps him win often in situations, and has a great mentality to go get the ball in the air
– Comfortable re-routing in scramble situations to make plays

– Limited route runner overall, is not overly dynamic in and out of cuts
– Lacks adequate functional play strength and will have a tough time as a blocker in the NFL
– Offers very little wiggle or power after the catch
– Tops of routes aren’t crisp and will let defenders back into plays
– Creating separation will be a major issue at the next level

– Played in 47 career games between Northwestern and Notre Dame (11 games at ND)
– Finished five-year career with 139 career receptions for 1,856 yards and 13 touchdowns
– Rushed for a touchdown in 2020 with Notre Dame
– All-ACC Academic Team honoree in 2020
– Competed in the 2021 Reese’s Senior Bowl in Mobile, Alabama
– Has some special teams experience, making six ST tackles at Notre Dame

Following a transfer to Notre Dame after four seasons at Northwestern, Ben Skowronek was hoping to put together one great season and secure a spot at the next level in the NFL.

Though that wasn’t quite the case at Notre Dame, Skowronek profiles as a bottom of the roster receiver that has some big-play abilities and can provide some snaps on special teams.

Skowronek had a knack for making plays down the field in 2020 at Notre Dame, showcasing his huge catch radius and overall strong hands for the Fighting Irish, especially down the field.

While he’s not a burner, he has enough juice to threaten vertically, and can win consistently in the air when in contested catch situations.

You can see at the top of the screen at the snap that Skowronek doesn’t have great overall long speed despite being a long strider, but he can get vertical and challenge defensive backs.

While he did play with a quarterback in Ian Book that was hit or miss with his accuracy, Skowronek has a huge catch radius to make up for some mistakes. You can see him swallow up this football on the play down the field, plucking the ball away and taking it in for the score.

On the road against Boston College, Skowronek had a career game, hauling in three scores.

On this one in the end zone, he shows his abilities in the red zone, getting vertical to work to the back pylon, and then showing vicegrip-like hands to clamp down on the ball and hold on while the defensive back tries to rake the ball out of his hands.

Later in the game against Boston College, Skowronek works out of the slot in the red zone. You can see his struggles in working hard angles as he rounds his out route here, which allows the defender to work back underneath, making it a harder throw for Book.

That said, Skowronek shows his body control to contort in the air and pluck the ball out of the air through contact for the score.

This was my favorite play from Skowronek in 2020.

With the play breaking down, Skowronek knows exactly what to do, turning back to the boundary to work up the field, providing Book with a target.

When not working down the field, Skowronek was able to work underneath the defense and take short catches and move the chains after the catch.

However, you can see there’s no creativity here with Skowronek in the open field. He doesn’t bring much power as a runner, and has almost no wiggle or elusiveness to his game.

Overall, with his size and ability to make plays in contested catch situations, Skowronek could carve out a role in the NFL as a red zone specialist. He can also provide whichever team picks him up with some special teams abilities on kick coverage, where he can make some tackles.

Outside of that, don’t expect much from a guy at receiver that lacks overall burst and explosiveness in his routes, and doesn’t create much separation.