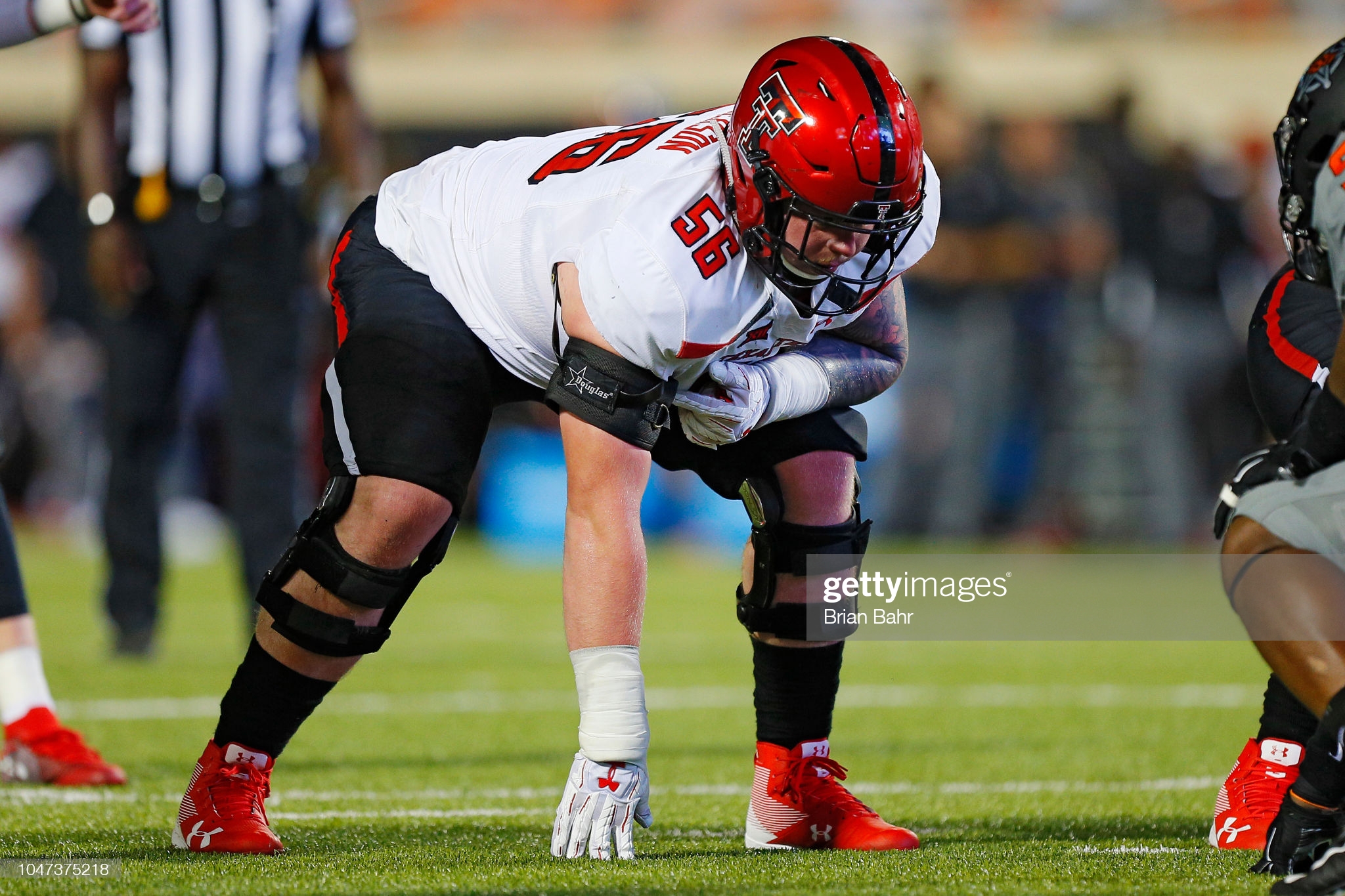 Jack Anderson of Texas Tech enters the 2021 NFL Draft with a wealth of starting experience, becoming one of the rare offensive lineman to start his true freshman season and his entire career for a Power 5 school. A career right guard with the Red Raiders, Anderson was a dependable starter for them over four seasons while receiving All-Big 12 honors in each of the three he remained healthy.

Anderson’s positives that he brought to the Texas Tech line came largely as run blocker, where he used the strength he has and a good ability to attack left and right to clear lanes for his backfield.

A good example of the skill he brought to the interior of the Raiders’ line on run plays is this one against Kansas State this season (two views). Anderson meets the defensive tackle attacking at inside and hits him at an angle, driving downward and completely clearing him away to the left. He hits that block, and the tight end comes over to hit a second one, clearing a massive lane for Xavier White to run through for the touchdown.

Anderson’s best work as a collegiate lineman came on double teams, both against the run and the pass. He kept himself in position at all times to join with either the center or right tackle to combine and erase a defender from the play, leveraging away from the pocket or designed running lane.

Here is an example of his work on double teams on a run up the middle. Anderson teams with the center to get underneath the pads of the Texas defensive tackle, and keep walking him back away from the line until the play has ended. Only Texas playing three in the box closer to the line keeps this play from going extra yards, as Anderson’s double block clears a lane up the middle of the field. Even still, Texas Tech gets the first down.

And here against Oklahoma is some of Anderson’s work pairing with the right tackle on a double team, this time on a pass play. The right tackle picks up the rusher coming on the edge, but the rusher tries to counter by cutting back inside toward the pocket. Anderson remains in position to help the entire time, and is there to deny the rusher a cutback inside. He goes further, driving the rusher away and clearing a lane for his quarterback to escape the pocket. Once again, his efforts on a double team result in a Tech first time.

Anderson is a dichotomy as a second-level blocker. The positive half of that comes when asked to pick somebody up in the box. Anderson gets beyond the line, quickly picks out the player he intends to block, and uses his size advantage to drive him away from his running back. His man does eventually begin to get free of the block, but by that point is unable to affect the play.

And here is the negative end of that dichotomy — when he is asked to hit a second-level block away from the box, in open space against more agile, faster defenders. Balance and agility are weaknesses for Anderson, and it shows here as he fails to make contact with the first oncoming defender, falling to the ground as that player gets forward and stops the play for a loss.

Anderson’s biggest area of improvement is pass protection, specifically a need for a much stronger anchor to handle oncoming rushers. Anderson routinely gives up steps to his defender once contacted, and can be driven into the lap of his QB on some plays. Here is one such example in that game against Texas. Anderson gets over and is ready to meet the oncoming tackle, but the tackle begins driving him backward from the moment they meet, and forces him right into the QB, who has to unload an awkward throw just to get rid of it.

Here is a similar play against Kansas State. Once again, an interior lineman rushes in and forces Anderson directly into the pocket and his QB, with Anderson lacking the strength to anchor. This time, the QB has to interrupt his progression and escape, and is still able to turn the play into a modest gain.

One specific move Anderson has to work to better defend against is the swim move. Against both the run and the pass, Anderson will let himself get off-balance or too far extended. Defenders are able to easily swim over him and advance on the pocket or backfield, as seen here against Texas. The defender pushes off of Anderson to get the Tech guard extended and leaned too far forward, and then hits a quick swim over him and meets the runner at the line, stopping the play after just a two-yard gain.

Any player that can prove to a Power 5 program that he is worth being a career-long starter along the line is worth a look in the NFL Draft, and comes with some form of NFL upside. Anderson is one such player, though his upside comes buried beneath some major issues that will need improved upon to make it at the NFL level.

His athleticism, particularly slow lateral movement and balance issues, put him at a disadvantage in different situations as both a run and pass blocker, and allow his men to beat him and disrupt plays. His strength is good enough to tie players up and retain them, but isn’t enough to prevent himself from being walked back into the pocket or to be able to steer and drive players head-on to create running lanes.

Anderson brings positives to his candidacy to be drafted, particularly his universal skill as a blocker on double teams, and his run blocking ability that is closer to being NFL-ready than his abilities in Pass Pro. But overall, Anderson is a developmental lineman, one who should not be drafted early on Day 3, and is not going to start as a rookie, or even handle considerable snaps as a backup along the O-line.

If a team can work with him on developing a stronger anchor and becoming more reliable in pass protection, Anderson may ascend to that role of long-term backup, or even become a versatile sixth lineman who can be an injury replacement at either guard spot, or at center with some work snapping the ball. His small arm length and lack of athleticism limit his projection to the interior OL, and teams shouldn’t use him at either tackle spot.

It’s not hard to imagine a team drafting Anderson late on Day 3. But for the Steelers, who like to draft NFL-ready lineman in the later rounds, Anderson is not a player to spend a draft pick on, and should instead be someone to pursue as a potential undrafted free agent, where he can land on the practice squad and receive work from Adrian Klemm and the rest of the team’s coaches.