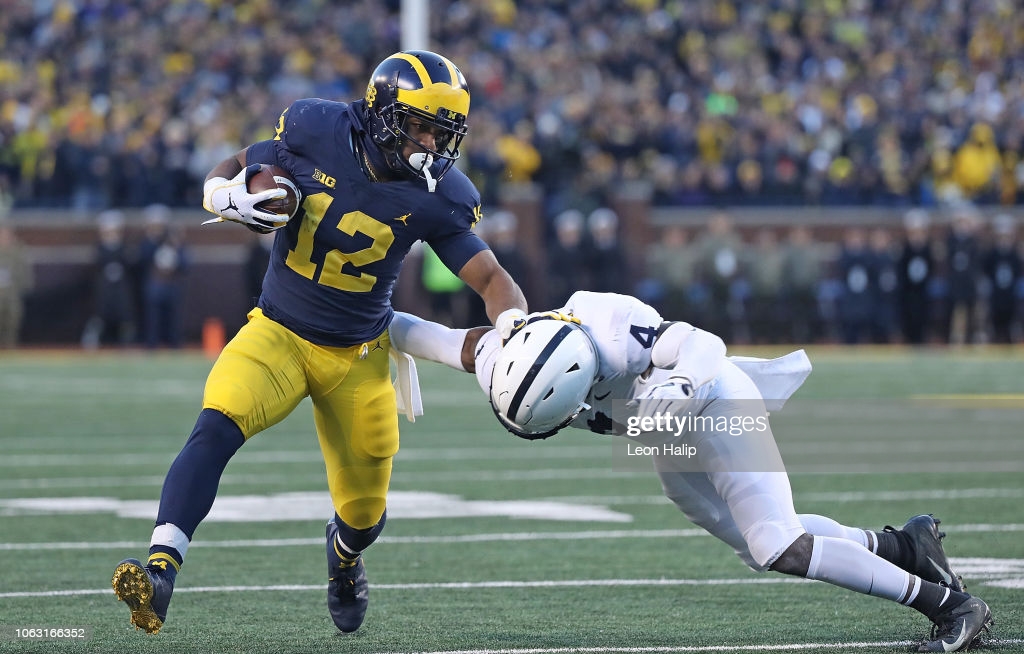 – Squatty, powerful running back
– Runs well behind his pads
– Changes directions easily without losing speed or explosiveness
– Able to make defenders miss in a phone booth; serious elusiveness
– Good overall contact balance to his game
– Adequate vision and can bounce and turn the corner with ease
– Natural pass catcher out of the backfield and showed the ability to line up all over the offense

– Struggled with mental mistakes throughout his time at Michigan
– Ball security a major concern overall; led to a handful of benchings with the Wolverines
– Won’t win many foot races in space; long speed is lacking for the position
– Overall resume and production isn’t quite there; more of a rotational piece at Michigan
– Can he handle a heavier workload at the next level?
– Relatively old for the draft class; will turn 24 as a rookie
– Never reached peak of freshman year
– Suspended all of 2019 season for academic issues

– Played in 42 career games at Michigan, starting six games overall
– Rushed for 1,795 yards and 15 touchdowns on 320 carriers during his career at Michigan
– Hauled in 49 catches for 479 yards and two touchdowns for the Wolverines
– Suspended entire 2019 season due to academic issues
– Named a All-Big Ten honoree in 2016, 2017 and 2018
– Competed in the Reese’s Senior Bowl in Mobile, Alabama
– Four-year letterman at Michigan

This late in draft season, when evaluating players, you’re looking for those late-round gems that could provide significant value to a team. I believe I’ve come across just that at the running back position, with Michigan senior Chris Evans.

Though he’s on the older side (24 years old during his rookie season), Evans has some really strong tape after four seasons at Michigan, and doesn’t have a ton of wear and tear, having shared backfield duties nearly every year for the maize and blue.

Suspended the entire 2019 season, Evans returned in 2020 and received just 16 carries, so his wear and tear is relatively light, compared to other backs in the draft class. That said, he hasn’t played much football in two years.

However, it feels like some of his best football is ahead of him with his skillset, which could make him a three-down back in the NFL in the right situation.

Through two years of tape, I saw a guy in Evans who runs well behind his pads, has great contact balance and flies in and out of his cuts with ease, gliding across the field in tight space.

Here against Western Michigan in 2018, Evans does a great job staying patient and picking his way through the Broncos’ defense, showing off his explosiveness in a phone booth to make two guys miss quickly.

You can see in this clip against Minnesota in 2018 that Evans isn’t very fast downfield, but he has nimble feet, good contact balance to make people miss, and then can open it up to chew up yards in a hurry.

He does a nice job to stay on track in the run game and I love that he doesn’t burst into the line right into his blocker, instead showing patience to let his blocker make contact, allowing him to work to the second level and take advantage of his mismatch against secondary defenders.

I genuinely love Evans’ patience, contact balance and overall vision to find the open field and rip off chunk plays.

First off, look at the feet here at the start of the rep. Once he’s into the hole he’s able to throttle down and square up to the defender, rumbling through the tackle attempt before seeing the lane outside, bouncing the run with ease.

He’s just a smooth operator in space. Nothing seems to faze him between the tackles, which allows him to pick through defenses, make secondary defenders miss and find green grass, much like he does here against Purdue in 2018.

Where I think Evans can stick in the NFL is as a dual-threat back deep on a roster.

In 2020, Michigan started Evans at receiver one game against Rutgers and got him involved throughout the game through the air.

I love this designed slant to get Evans the ball in space one on one against a Rutgers defender, an area in which Evans wins consistently.

I believe with this type of versatility Evans will be more productive in the NFL than he was in college.

Even out of the backfield, Evans is dangerous as a receiver. Here against Wisconsin in 2020, Evans does a great job showing he can make a defender miss in space, taking this short swing route into the end zone by stopping on a dime and bursting into the end zone.

Overall, I think Evans will fall down boards due to his average testing numbers, but what you have on tape is a true football player, one that wins consistently despite not being the best athlete at the position.

I believe Evans is a classic college running back that blows up in the NFL in the right system with the right opportunity.