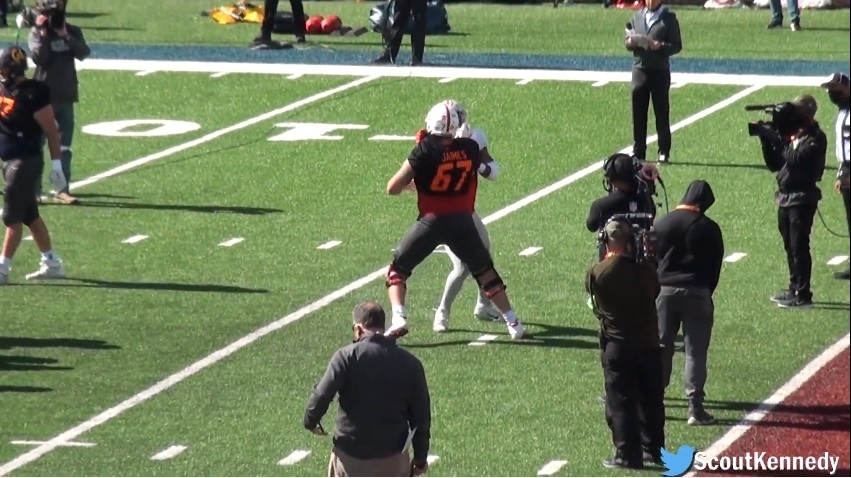 – Active, quick hands in pass sets that allow him to reposition his hands
– Plays with balance and solid base in both run and pass blocks
– Versatility in pass block tool box, uses flash technique, snatch/trap to mix up pass sets
– Displays flexibility in lower half to reach second-level defenders, move rushers past quarterback in the pocket
– Handles stunts and twists well, passes them off cleanly and efficiently
– Rolls hips consistently upon contact, showcases next-level footwork
– Played 40 consecutive games to end his career, no injury or red flags

– Lacks ideal arm length to match NFL’s threshold for starting tackles
– Inconsistent power when making initial contact
– Struggles maintaining blocks, several times on tape rolls off of blocks
– Would like to see him reach his second level landmarks quicker and hit them with more consistency
– Shows flashes of dominance in run game but want to see it more on down-to-down basis

An offensive lineman that won’t wow you with traits, but executes his assignments on a down-to-down basis is Nebraska LT Brenden Jaimes, who started in every game he has played in and did not miss a single game in college. Having played both left and right tackle in college, Jaimes could very well be a player who could make an immediate impact in the NFL.

First play from Jaimes against Northwestern shows off his ability to move laterally and stay balanced despite being beat at the initial point of attack. He loses on an inside swim move, but counters quickly with a spin move to get in front of his defender again. Not overly athletic or twitchy, but a savvy move from a player who understands his physical limitations.

Playing with balance and a really good base allows Jaimes to win reach blocks, despite not having the greatest length. He reaches the defensive end against Iowa and keeps driving his man into the ground. As mentioned above, he shows some dominant run block reps, but needs to do it at a more consistent level.

Active hands and fundamental footwork were adjectives written down to describe who Jaimes is as a prospect, and this two-clip gif shows exactly that. In this first part of the gif against Ohio State, Jaimes does a nice job stunning the edge rusher, re-loads his hands and works to get them inside the defender’s chest, preventing any pressure. Second play in the gif shows Jaimes being able to replace his hands and maintain his pass block despite his man countering his initial punch.

The snatch-and-pull technique is one a tackle rarely uses successfully, but to combat his lack of arm length, Jaimes has mastered the move. Against Northwestern, Jaimes was able to pull this move off twice. In this particular rep, he is patient with his hands, snatches the defender when he attempts to bull rush Jaimes and pulls him to the ground, eliminating the pass rush threat.

Sustaining blocks after initial contact in the running game is one area Jaimes will have to improve. Here, against Ohio State, Jaimes does a nice job, taking the proper path on this reach block. But his block lacks power and torque. A better initial punch and stun of the defender would have allowed him to control the block better, and it will be something he needs to improve at the next level.

In some of his toughest matchups this season, Jaimes was able to win despite not always having an advantage with speed or arm length. Against Penn State and flexible pass rusher Shaka Toney, Jaimes does a nice job not opening the gate and allowing Toney to bend the corner. He shows adequate waist bend and anchor to run Toney past the quarterback in this particular rep. Was not a perfect rep for him by any means, but he gets the job done by any means necessary.

Final play from Jaimes shows his ability to operate in the open field as a blocker against Iowa. On this wide receiver reverse, he ends up becoming the lead blocker, and while he shows some athleticism getting out and attempting to make blocks, he doesn’t make a clean block but gets a piece of the defender. Won’t wow you, but is just a solid football player.

Brenden Jaimes’ name gets lost in the shuffle of this offensive line class because of the depth, and athletes at his position. However, if a team is looking for a player who won’t be a long-term project or projection that can make an immediate impact from Day 1, they should look no further than Jaimes, who was a four-year starter for Nebraska.

Lack of elite traits and struggles with power will prevent him from getting his name called before Day 3, but he’s one of those lineman who can compete to be a starter in year one. While he did not play guard in college, his ability on tape to play with a good anchor, active hands and footwork would allow him to be a spot starter in a pinch along the interior.

Games Watched: at Iowa, at Ohio State, vs. Penn State, at. Northwestern