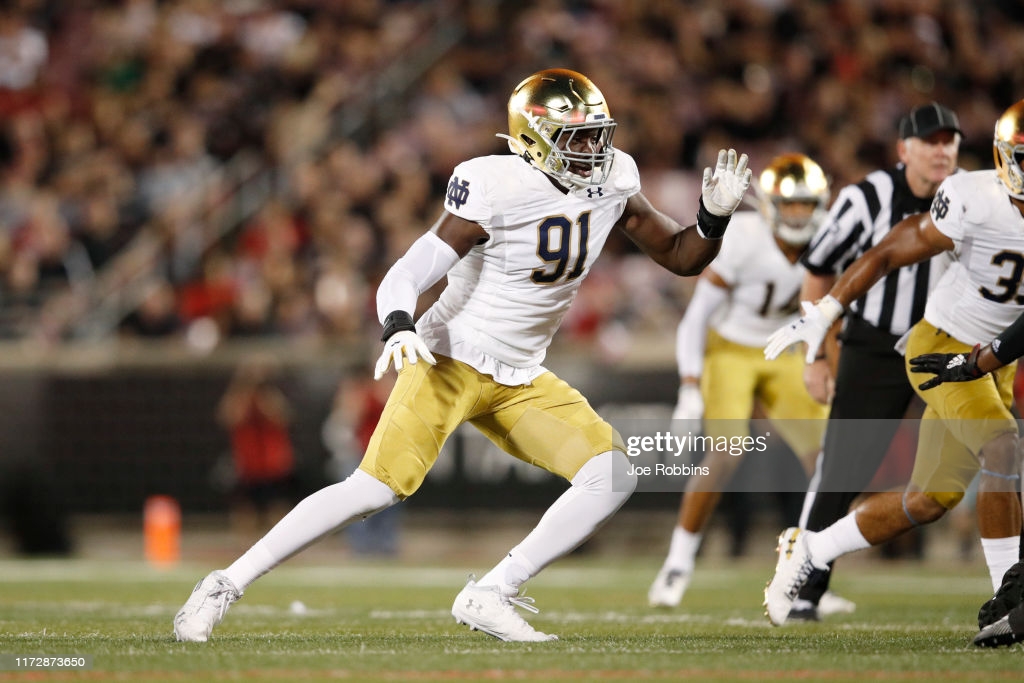 Notre Dame had two edge players drafted in 2020, and will likely have two more drafted in 2021 in Daelin Hayes and Adetokunbo Ogundeji (pronounced ah-DAY-tok-uhn-bo oh-gun-day-gee). Ogundeji is long and lean with elite arm length (35 1/4 inches).

As a pass rusher, he has solid snap quickness and showed improvements in hand usage over the course of the season, as well as in his pass rush plan. He mixes it up using yanks, rips and spins to the inside. His most effective rushes came on stab and speed to power when he got good placement with his hands. He primarily came off the edge, but did kick inside on some passing downs. Ogundeji has solid awareness on screens, is solid avoiding cut blocks and gets his hands up in passing lanes. He was rarely asked to do anything in coverage, and I only saw about three plays on running backs in the flat.

Against Clemson facing off against the left tackle, he heads up the outside and nicely catches the hands of the tackle, swimming over him to the inside to get in on the sack.

At North Carolina rushing from the left edge, he uses a stab to the inside shoulder to get the right tackle off-balance and get the sack.

Against Alabama, he uses good hand placement and leverage to push the right tackle back into the pocket.

As a run defender on runs his way, he shows good effort and uses his length, using a long arm to set the edge to force runs inside, and will take on pullers effectively to spill plays for the linebackers. He shows good awareness on the backside to cut off running lanes. Ogundeji is solid shedding blocks once he gains leverage. He shows good pursuit across and down the field, and is a good tackler.

At Pittsburgh, he gives up a little ground initially, but sheds the guard and gets in on the tackle.

At Boston College, he reads the snap quickly and beats the block of the tight end to knife into the backfield for the stop.

At North Carolina, he’s lined up inside as the 3T and reads this run, shedding the guard and giving good chase to the outside to make the tackle.

He has adequate upfield acceleration and has marginal bend around the top of the arc. He is too easily pushed off of his rushing lane and past the quarterback. His punch is adequate, lacking power, but his length leaves potential if he can get the timing more consistent. On stunts, he wasn’t able to move linemen as the penetrator, and has marginal lateral agility to be effective as the looper. He needs to add strength to anchor better vs. drive blocks. His shed ability could be quicker, and he has marginal COD to react to ball carriers’ cuts. His route to run after the ball is circuitous and lacks explosiveness.

At North Carolina rushing on the left side, the right tackle shoves him far to the outside and he ends up deep behind the QB.

Against Alabama, without positive speed or power traits his hands are that much more important. Here against the left tackle, the stab with the left hand is low and doesn’t get much push, and the tackle catches his right hand, limiting his power.

Overall, Ogundeji has solid snap quickness and use of hands, and is developing a pass rush plan. He is assignment-sound against the run, can set the edge, pursues well, and is a good tackler. Areas of improvement include adding play strength to anchor, perfecting his punch to add power, and improving his quickness when shedding blockers.

Ogundeji lacks the quickness and power to be an above average pass rusher, but when he is good with his hands he can find ways to get pressure. He is solid against the run and his length could be cultivated into an advantage. I think his best option is to add weight and be a strong side defensive end in an even front defense. For Pittsburgh, he may not be the best fit as an outside linebacker, as they like theirs to be more athletic.

Games Watched:  2020 — at Pittsburgh, vs. Clemson, at Boston College, at North Carolina, vs. Alabama