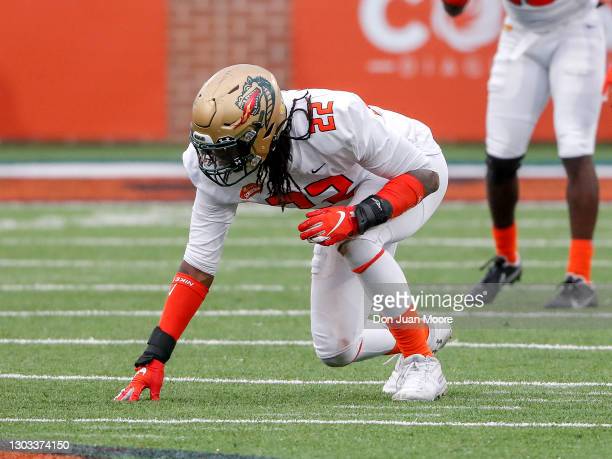 – Not ideal playing weight for NFL edge
– Tries to beat every block with speed, needs to improve hand usage and functional strength
– Struggles in short area change of direction due to size
– Plays too tall, leads to inability to counter wash-down blocks
– Suspended indefinitely for his role in credit card scheme in 2017 at Florida, never rejoined team

There aren’t many edge rushers in this draft class that can bend the corner like UAB’s Jordan Smith can. While he will enter the league as an undersized edge player, he showed flashes of dominance and potential during his two-year stint with the Blazers. He fits the bill as another mid-round player who has traits, but needs to develop his game further.

This first play against South Alabama showcases that bend that Smith possesses. His snap get-off nearly beats the tackle from the start of the play, dipping underneath the tackle’s play side arm and closing for the sack. When Smith wins, he wins with his speed.

Against Rice, Smith nearly bends below the hips of the tackle and makes an incredible, nearly game-ending sack. Flexibility in his lower half allows him to run the arc to near perfection on this play.

The incorporation of the cross chop, dip, and rip is a big part of Smith’s pass rush plan, as well. Against Tennessee in 2019, he sets up his speed rush with the cross chop, turns the corner, and makes the sack. Impressive athleticism from the Blazers’ edge rusher.

Smith uses his long strides and relentless effort to close backside cut back lanes and run down the line to make plays in the backfield. In the first part of the clip against Miami, Smith reads the give on the read option and makes a tackle for loss from running flat down the line. In the second part of the clip, Smith closes the edge with his initial quickness and makes the tackle at the line of scrimmage against Florida Atlantic.

While the bend and play speed are attractive for his game, Smith has some work to do cleaning up the technical aspects of his game. He struggles taking blocks head on and shedding them with hand usage. Against South Alabama, Smith runs directly upfield, not maintaining his gap, leaving a huge hole for the running back to pick up a big gain. Smith has to do a better job holding gap integrity when attacking in the run game defensively.

Smith also needs to provide a better rush plan that either doesn’t rely on speed or has some sort of deception. Against Miami here, Smith has his speed rush and speed to power moves stymied, and he has no answer to get around the offensive lineman. While he did continue his relentless pursuit, Smith struggled stringing together counter moves.

This final play from Smith showed a small sample size of if he uses his length more to his advantage to convert speed to power, and displace tackles. Against Tennessee, Smith does a nice job with his initial punch and shock, leading to the extension of his arms and displacing the tackle. Impressive tape all around for the UAB standout.

Jordan Smith is far from a finished product on the field, but his length and ability to run the arc make him an intriguing mid-round option. While the Steelers spent a mid-round pick on Alex Highsmith last season, dipping into the edge class again may not be a bad option, especially when Smith could potentially grow as a situational pass rusher.

Smith’s past will need to be vetted by NFL teams, but all indications seem to be that Smith has learned from his mistakes and won’t be an off-the-field problem going forward. The traits are there for him to be a high-level starter if he can add weight to his frame, as well.