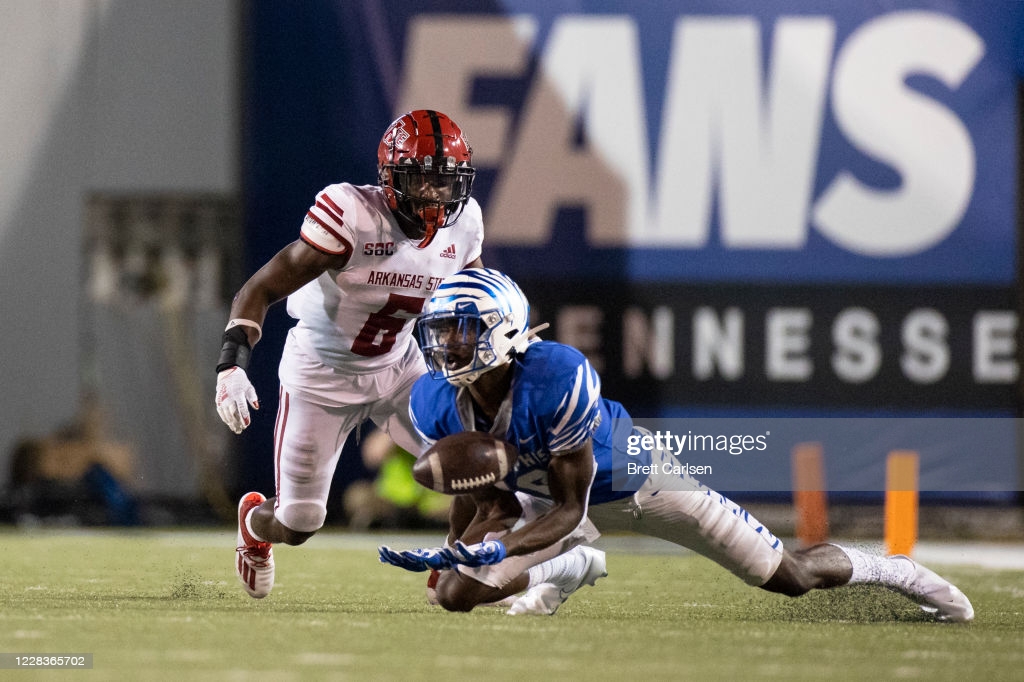 A possible late-round wide receiver prospect who is heading into the 2021 NFL Draft with a ton of collegiate production is Damonte Coxie from Memphis. Coming out of high school, Coxie had offers from the likes of Alabama, Florida, and LSU. He originally committed to play for LSU, before tearing his meniscus while partaking in the triple jump at a track meet his senior year of high school. Before signing, LSU rescinded their offer to Coxie (due to academic reasons).

With newfound motivation, Coxie took his talent to the University of Memphis. There, he would play behind Anthony Miller (a future second-round draft pick in the 2018 NFL Draft) his freshman season, before putting up consecutive 1,000-yard seasons in 2018 and 2019. Following 2019, Coxie was nearing the top of the Memphis all-time receptions and receiving yards lists, but due to the ongoing COVID-19 pandemic, he only played in two 2020 games before opting out of the remainder of the season and declaring for the 2021 NFL Draft.

This first clip is from Memphis’ 2019 game vs. Tulsa. A main quality that grabbed my attention when watching Damonte Coxie’s film is his very apparent competitiveness. It shows up constantly in all aspects of his game. It is definitely the reason he has consistently produced in his collegiate career. Coxie does not shy away from any player, or any battle. In this clip specifically, Coxie (bottom of the screen field side) has a free release and finds some space to work with. After securing the catch, he slips out of the first attempted tackle before being taken out of bounds.

What really stands out about this clip is Coxie’s reaction to the hit he’s given on the sideline. He pops up immediately after the hit and starts chirping in the ear of the DB that gave it to him. This is early in the game, too! No introductions needed for Coxie; straight to business. His competitive nature/mindset makes him a treat to watch. I will discuss his blocking a bit later in the report, and you guessed it, he shows a competitive mindset blocking, too.

This second clip is from Memphis’ 2019 game vs. SMU. Coxie showcases his catch radius and hands. At the snap, Coxie (boundary side) utilizes a small hop into a jab to the inside before shifting his momentum to the outside, swatting at the DBs hands, and continuing up the sideline while keeping the DB at arm’s length. He also gets his head around immediately after stacking the DB and keeps his eyes on the pass, while maintaining his distance from him. Then, Coxie reels in the pass one-handed with his left hand. A facemask penalty was called on the defense because the DB grabbed Coxie’s during his release.

This clip from the same 2019 game vs. SMU illustrates Coxie operating vertically, which despite not having game-breaking speed, he is capable of doing. With the DB in soft press, Coxie (field side) opts to take a speed release to the outside. He’s met by resistance from the DB, but Coxie is able to fight through the contact while tracking the over-the-shoulder throw to the sideline of the end zone. Coxie can stretch the field; he is capable of running go routes. However, it remains to be seen if he will be able to continue using his physicality against bigger, faster, stronger, and better DBs to fight through contact, if he makes an NFL roster.

This clip is from the Tigers’ 2020 matchup with SMU, one of just two 2020 games in which Coxie played. As a projected possession receiver, Coxie should be able to thrive on quick short/stop routes. Since he can stretch the field utilizing physicality, length, and contested catch ability, DB’s have to respect that part of his game. This opens up short routes underneath for him, where he’s very good at fighting through the hands of DBs and contorting his body to react to throws. On this play specifically, Coxie (top of the screen) does a good job of hesitating then selling the outside release before swiping at the DB’s shoulder and cutting back inside for the catch. If working with a QB who can anticipate and time throws, Coxie should find success in a possession role.

This clip is from Memphis’ 2019 game vs. Tulsa. Coxie is out wide field side. He utilizes a small hesitation hop with hand movement off the line in order to stand tall, then drops his weight on the cut inside. What really stands out here is Coxie’s will to hang onto the pass while carrying a defender piggyback style, then also taking another hit and still crossing the first down marker. Reliable hands here from Coxie, and that’s something he displays often.  That helps his projection as a possession receiver.

This clip is from the Tigers’ 2019 matchup with SMU. Coxie has very good body control for a guy his size, and he’s able to contort his body to make difficult catches. Since he’s not a burner, these types of back shoulder/over the shoulder throws (as well as the aforementioned variations of short routes – quick slants, stop routes, outs, etc.) are going to be key for him (he needs to be consistent in contested catch situations, which he has shown the ability to do). In this clip, Coxie (field side) uses a slow-tempo release to his advantage. He does a little stutter step before cutting to the outside. Then, he eases up and turns to grab the pass. Like the last clip, being able to make these catches helps his projection as a possession receiver.

This clip is from Memphis’ 2020 matchup with Arkansas State. Similar takeaway. Back-shoulder throw, really good body control to contort his body and make the catch. Coxie (top of the screen) hops off the line before hand fighting with the DB up the sideline, and the entire time he has to fight the hands of the DB. Then, despite the DB grabbing onto his shoulder pad, Coxie is able to put on the breaks and turn to secure the catch and survive the ground despite more contact.

This clip is from the same 2020 game against Arkansas State. Coxie (out wide boundary side) shows some awareness to navigate around the pressed DB, then find the soft spot in the defense. He gets his head back around to eye the QB, sits down, makes the grab, then eludes the most immediate closing defender for a nice reception.

This clip is from Memphis’ 2019 game vs. Cincinnati. Coxie is at the top of the screen against press coverage.  Look at the aggression he shows in the run game. That’s a complete battle between receiver and DB. Coxie is looking to drive that DB all the way back into his own end zone. While it’s not the most fundamentally sound rep, how can anyone really nit-pick that when you see the grit Coxie is showing. Like I touched upon in the first clip of this report, based on tape study, Coxie looks like a guy that loves to play the game of football. He looks like he wants to show up and compete in every aspect of the game.  He is a blocker that displays solid technique and a “want to” attitude.  For a fringe draft selection, these are the types of factors that will weigh in Coxie’s favor.

This clip from Memphis’ 2019 game against Tulsa showcases Coxie’s ability as a blocker yet again. He’s lined up with a reduced split boundary side. At the snap, he starts with a run-off technique to carry the defensive back guarding him away from the play, then he quickly lurches the DB backwards with some punch, first from one-handed engagement then from two-handed engagement. From there, he maintains both hands on the DB, until the running back scoots past him and into the end zone for a touchdown.

This clip is from Memphis’ 2019 game against Southern. While you may be thinking to yourself, “This is a highlight play,” I believe it shows the main hindrance to Coxie’s game: A lack of speed. Coxie lacks breakaway speed and a second gear in general. On this play, the catch is a freebie for Coxie (boundary side), and he has nothing but green grass ahead of him, yet he isn’t able to reach the end zone. He gets chased down from behind by a defender. This lack of speed shows up on Coxie’s tape, and it’s easily his main issue when discussing his projection for the pro level. Coxie ran a 4.77 40-yard dash at his Pro Day. He didn’t have great agility scores, either.

This clip from Memphis-Cincinnati in 2019 again illustrates Coxie’s lack of straight-line speed, putting him at a disadvantage. Here, Coxie is being pressed boundary side. He shows good initial physicality off the line to gain separation, but the DB is still able to recover and stay on top of him vertically. Since Coxie isn’t able to accelerate up the sideline to challenge the DB, the QB has nowhere to place the pass so he ends up throwing it out of bounds.

Coxie could have a hard time separating at the next level due to his lack of speed. In order to win at the pro level, he will have to focus on becoming a true technician at the WR position in terms of route running. He does have some nice traits going for him, but he will have to become elite and calculated when it comes to his route running/footwork, in order to make up for his lack of speed.

I’m not the one thinking it… you’re the one thinking it… right? Anquan Boldin, anyone? No?! Ok. All jokes aside, Coxie just shows up and plays the game of football. He may not have the testing numbers, or will ever be the fastest, strongest, or most technically sound wide receiver (although he does show flashes of potential technique wise, and could possibly improve further), but he does produce. So, while there is a likelihood he won’t be selected in the 2021 NFL Draft, that production he grinded for and earned throughout his collegiate career will definitely have scouts doing their due diligence.

Unfortunately for Coxie, the WR group is rich with talent this year, and that may make him one of the odd men out. However, based on film study (not having access to talk with/interview him, obviously), Coxie looks like the type of gamer that players would want as their teammate, and staff members would want to coach. I’m rooting for Coxie to succeed. If he’s not drafted, I wouldn’t mind if the Pittsburgh Steelers were to bring him in as an undrafted free agent.