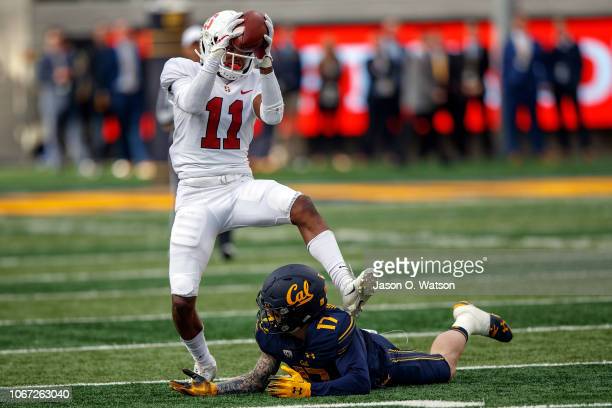 In the wake of crucial depth re-signings at the tackle and linebacker positions, Pittsburgh is overwhelmingly likely to select a corner within the first two days of the draft. Today, we’ll be diving into an intriguing mid-round prospect at the boundary cornerback position: Stanford’s Paulson Adebo, who’s unique combination of length, physicality, and ball skills allow him to suffocate receivers in both press and off-coverage alignments. While Adebo’s ball skills are evident, with eight interceptions and 27 pass breakups over the course of a 21-game collegiate career, his film shows a player with potential to develop into an All-Pro-level boundary corner, capable of guarding X receivers.

While Adebo, much like other lengthy corner prospects, is at his best in press coverage, his patience, football IQ, and ball skills make him an extremely effective defender in off coverage alignments as well. In the first clip, from 2019 against Northwestern, Adebo, aligned just shy of the sticks on third down, stays patient before opening to match the receivers break, closing rapidly, and undercutting the out route for an interception along the sideline. Later in the same game, aligned five yards off in man coverage, Adebo utilizes a patient pedal to stay in-phase before flying downhill to separate the receiver from the football with an aggressive right hand punch at the catch point.

With his unique combination of length and physicality, few cornerbacks in the 2021 class fare better in press coverage assignments than Paulson Adebo. In the first clip, aligned in press coverage to the boundary against USC’s Tyler Vaughan, Adebo stays patient off the snap before squeezing the receiver to the sideline with a smooth two-hand jam, snapping back to contest the comeback, and finishing with a right-hand punch to secure the pass breakup. In the next clip from a 2018 matchup against Oregon, Adebo aligns in press coverage before inching into catch technique at the sticks pre snap, shuffling to match the receiver’s release with outside leverage, re-routing the receiver with a two-hand jam at the top of his route, and laying out to get his left arm across, securing a crucial third-down pass break-up in the process.

A capable cover corner at any level of the field, Adebo consistently excels in the red zone, where his physicality and ball skills allow him to imprison opposing receivers. Late in an overtime matchup against Oregon, Adebo aligns in catch technique at five yard depth, staying patient before engaging the receiver at the top of his route, staying in phase on the in-breaking route across the back of the end zone, and laying out to undercut the pass for a wildly athletic right-hand pass breakup.

Although less experienced in zone coverage, Adebo consistently flashed solid zone processing while also rallying well to tackle the catch. On the first rep, aligned as a flat zone defender in a Cover 2 scheme, Adebo passes the post to his safety, picking up the wheel, carrying it vertically with outside leverage, and skying to attack the ball at its apex for an impressive downfield pass breakup. Earlier in the same game, again deployed in a flat zone assignment in a Cover 2 scheme, Adebo sinks patiently to occupy the curl window before processing the swing route, flying upfield, and shooting low to cut the back down for a minimal gain.

Unlike many other lengthy cornerback prospects, Adebo’s physicality and effort make him an extremely effective run defender on the boundary. In the first clip, aligned in press coverage to the boundary, Adebo disguises his blitz with patience before flying untouched into the backfield off the snap, and shooting low to cut down the back well short of the line of scrimmage. Earlier in the same game, aligned as an overhang defender to a tight set, Adebo diagnoses run and shows no hesitation stepping up to fill the C-gap, evading the pulling H-back, and shooting low to halt the back after a short gain.

Although certainly one of the most willing and able tacklers in this year’s class, Adebo, carrying a slight frame at just 192 pounds, will occasionally slip off larger, more physical backs when he stops his feet upon contact. Below against Northwestern, Adebo follows an inside release before diagnosing a “crack and replace” situation, stepping up to fill the alley properly, but dropping his head and stopping his feet upon contact, allowing the back to power through him and gain 10 extra yards after contact. Moreover, teams have learned to take advantage of Adebo’s aggressive tendencies, as Northwestern does below, drawing Adebo inside, where he is slow to identify “crack and replace” before sealing him inside with a peel-back block from the pulling right guard, compromising his outside leverage responsibilities and opening a lane for the back to rumble down the sideline for a first down.

While I honestly struggle to find any major flaws in Adebo’s coverage tape, the one minor fix, which could take his game to the next level, would be maintaining proper eye discipline out of his breaks with more consistency. Below, against USC, deployed as a flat defender in a Cover 2 zone, Adebo opts for catch technique, getting an early break to contest the out route. Yet as his eyes drift toward the backfield, he takes himself out of position to undercut the route, allowing a potential pick six to result in a completion for positive yards.

Overall, Paulson Adebo enters the 2021 NFL Draft as one of the most intriguing, yet difficult to evaluate prospects in this year’s class, flashing brilliance and talent that few can match, yet putting his stock into flux with a decision to opt out in 2020. Nonetheless, Adebo has the potential to develop into an All-Pro level boundary cornerback, with the length, physicality, and ball skills to shadow X receivers from various alignments, while also offering positive contributions as a run defender. As for scheme fits, Adebo would be best served playing in a single high scheme, although his tape as a flat defender in Cover 2 certainly suggests that he could serve as a playmaker in Tampa 2 schemes as well.

While Adebo plays with relatively refined technique for an inexperienced prospect, further refinement of his eye discipline could unlock even greater potential as a playmaker in both zone and off man coverage. Although carrying a slightly larger frame, in coverage, Adebo reminds me of longtime NFL veteran Jonathan Joseph, as both are extremely fluid players in off man and zone coverage, where their natural ballhawking instincts shine, while serving equally capable of shadowing X receivers in press man coverage, using their length to disrupt receivers both off the line and downfield.

While it’s uncertain that he will be capable of contributing immediately as a rookie given his time off, Adebo’s raw talent, athleticism, physicality, and above average football IQ, more than justify his value as a potential mid-round selection. If selected by Pittsburgh, Adebo would likely compete for snaps as a boundary cornerback in Nickel and Dime packages, with Cam Sutton kicking inside, although it remains to be seen whether the Steelers may want to select a more slot capable player to keep Sutton on the boundary.