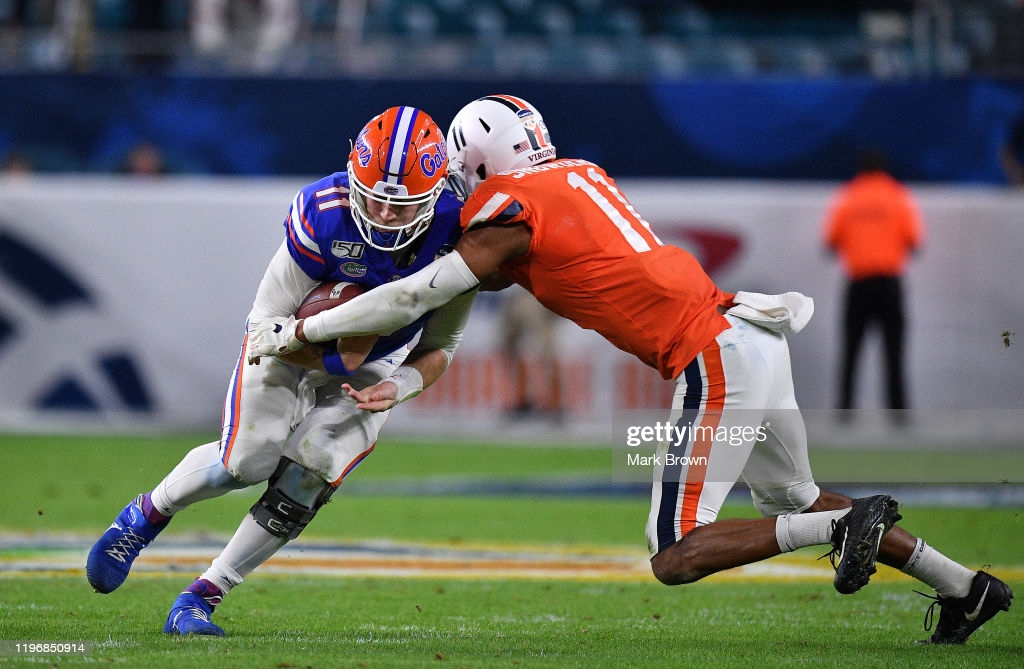 -Good athlete with the speed, explosiveness, and short area quickness you like to see in an edge defender
-Moves well given his length and size
-Great size and arm length (34”) to be a menace in passing lanes and difficult for tackles to get hands-on with
-Long arms allow him to get first contact on tackles and keep outside contain against the run
-Great in coverage given his ability to read the QB’s eye and process what is happening in front of him
-Length is a great asset in closing up passing lanes
-Runs with backs and TEs well in coverage
-Can win with speed and a little bend on the edge as a pass rusher
-Shoots gaps fairly well when coming from the 2nd level
-Covers ground quickly on his rush with his long strides
-Shows fantastic effort when playing chase of the QB
-Has great pursuit from the backside and downfield against the run
-Contributes on special teams coverage units
-Still growing into his body and has showcased more versatility every season

-Is very lean given his height and length, lacking size to anchor against the run
-Lower-half is notably thin, needing added size and strength to hold up on the edge
-Needs to fine tune his hand usage in his pass rush and develop a go-to counter move
-Can be easily be knocked off his spot and needs to finish more as a tackler through his opponent
-Coming off of a fractured ankle, not doing any pre-draft testing

-Senior prospect for Silver Spring, MD
-Offered a basketball scholarship by St. Francis (PA) despite turning his attention to football for his junior and senior seasons in high school
-Played in ten games as a reserve as a true freshman in 2017, recording 13 tackles, two for loss, and one blocked kick
-Stepped into a starting role in his sophomore campaign, recording 61 tackles, 7.5 for loss, 2.5 sacks, two interceptions and seven pass breakups
-Started 14 games in his junior campaign, notching 72 tackles, 11 for loss, with five sacks and four pass breakups)
-Started eight games in his senior season, racking up 44 total tackles, 10 tackles for loss and six sacks, also breaking up three passes
-Suffered a broken right ankle that ended his senior season
– Honorable Mention All-ACC in 2019, Second Team All-ACC in 2020, 2020 team captain

Charles Snowden from Virginia is an intriguing study as a player that is still growing into himself as a football player. Snowden has freaky length for the linebacker position, having the height and wingspan that sticks out the second he comes off of the bus. Add in his athleticism and pursuit of the football, and you have a fun case study as a prospect. Snowden’s length gives him the advantage of getting hands on a blocker first at the LOS, keeping them off his chest and allowing him to play outside contain and keeping his outside leg and arm free. You see that here in this clip against Miami fights to keep contain against the LT, stringing out the play and making the TFL in the backfield.

Snowden plays assignment sound football on the edge, making sure to contain his gap and then pursue the ball. Here on this play against the Tar Heels, Snowden crashes down on the down block by the tackle to play the LOS against the run with his shoulders square to the football, then brakes on the QB #7 Sam Howell once he decides to keep it on the RPO, showing off his burst and long strides to close ground and bring him down for the sack.

Snowden’s ability to close on the ball comes not only in run defense, but also in pass coverage and in his pass rush as well. His length helps him cover ground so quickly, making him a good mover in open space. Here in the same game, we see Snowden drop into the flat but recognizes Howell rolling out to his right with the TE in to pass protect. Snowden then brakes on the ball, closing ground on Howell quickly and wraps him up for the big stop on 3rd down.

Now Snowden is an effective drop guy in zone coverage, but he has the speed and movement skills to run with backs and TEs in man coverage situations as well. As you can see here, Snowden is tasked to pick up #8 Michael Cater coming out of the backfield on the wheel route and runs with him up the sideline pretty effortlessly. Obviously, the ball goes to another receiver and UNC scores, but this play showcases how versatile Snowden can be as a defender.

Snowden’s length is a true problem for offenses in the passing game, having the long arms to bat down passes at the LOS and also contest passes over the middle. Even if he fails to get home on his rush, he can still impact the pass with his frame. Back in 2018, Snowden led all LBs in the nation in PBUs. Here is one of those against Virginia Tech where Snowden is coming off of the edge unblocked, but notices the ball is coming out and play the pass, tipping the ball into the air and coming down with it himself for the INT.

Now Snowden is a great effort pass rusher, but he needs to continue to develop his outside rush. I will highlight some of his inside rushes in the next few clips, showcasing his ability to shoot gaps and win on twists and stunts inside, but he doesn’t have the hands usage yet on the edge to consistently beat tackles in this area. He can win with speed or a little bend, but his hands do need to see improvement. Like on this rep, Snowden tries to get the corner, but the tackle picks him up, causing Snowden to try and go back inside where he slips and falls. However, the tackle leaves Snowden and he gets up to pressure the QB and bat down the pass. Here you see the issue of Snowden’s thin frame and skinny legs being able to keep balance on his rush, but you also see the effort and motor to get up and impact the play.

On this play against the Hokies a year later, we see Snowden shoot the inside gap, causing #77 Christian Darrisaw to have to make a decision. Darrisaw decides to take the outside blitzer, leaving Snowden free to shoot the gap and chase down the QB in the backfield. Darrisaw should have gone inside most dangerous but failed to recognize this as Snowden makes the play.

Here’s another example where Snowden wins on an inside rush vs Old Dominion where he shoots inside the B-gap with a blitzer taking the outside, extending both his arms to keep both the guard and tackle off of his frame as he closes on the passer to bring him down for the sack.

Snowden also will provide a team with immediate special teams value on punt and kick coverage units, and can be deployed in a variety of ways. Here against Liberty, we actually see Snowden run up the seam on the fake punt attempt, catching the ball and setting up the offense in the red zone.

Overall, Snowden is pretty thin for his size and needs to add some functional mass and strength to be an every down player in the league, but he has a lot of good traits that will help him make an immediate impact for whatever team selects him. Player comparison wise, his play is similar to Tyus Bowser coming out of Houston as an athletic DE/OLB hybrid that could run and cover, but his length is more reminiscent of Lorenzo Carter of the Giants who also plays a similar role as a run-and-chase defender that can cover and play special teams.

While Snowden is able to play as a standup OLB in a four-man front, his best fit is as a 3-4 outside linebacker that excels in coverage and can shoot gaps and be utilized on twists and stunts with the interior defender. As he continues to work on his pass rush skill set and hopefully add more mass to his frame, Snowden can work from being a rotational player and key special teamer to more of a starting role for an NFL team. Pittsburgh is in need of depth at OLB and Snowden could fit the bill as an athletic, high-character player that can wear a lot of hats early on special teams and come in to give Watt and Highsmith a breather, holding his own in pass coverage situations as he builds his frame to become a more consistent edge rusher. Should Pittsburgh be looking to add another developmental edge in the middle rounds, Snowden could be a player they are considering to fill that role.