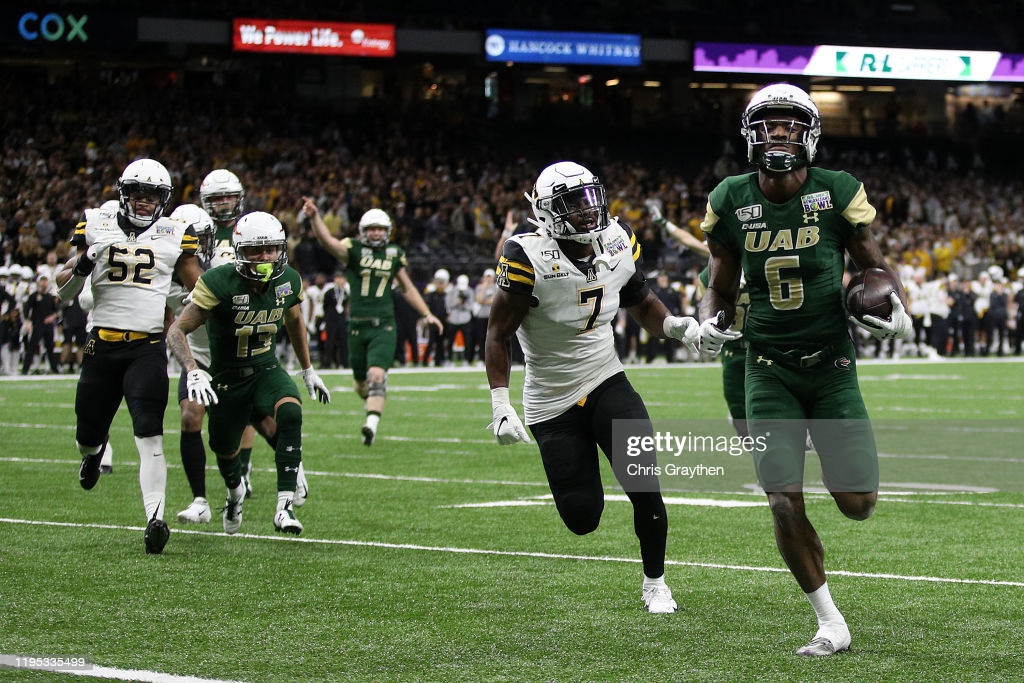 While he doesn’t possess the speed of his cousin, UAB wide receiver Austin Watkins Jr. plays physically and caught a pass for a first down nearly 76 percent of the time. At the Senior Bowl, he turned a lot of heads with his ability to make tough, contested catches and being a reliable weapon for the quarterbacks in practice.

The first play against South Alabama shows off Watkins’ competitiveness to go up and make a tough catch with a defender draped all over him. He does a nice job tracking the ball, and positions his body for the catch while catching at its highest point for a touchdown.

Against Miami, Watkins makes another fantastic adjustment to the ball that is thrown behind and inside instead of towards the pie-line. He sells the route well until he gets to the top of the route and rounds it off, instead of making it a sharp cut, but shows off his play strength to muscle through contact and make a tough touchdown catch.

His ability to ball track is one of his best traits as a receiver. While he does not have burner speed, he does a nice job with a speed release at the line of scrimmage, stacks his man to give his quarterback room to fit the ball downfield, and makes a great over the shoulder catch.

Making catches across the middle is no issue for the UAB standout. Against Louisiana Tech, Watkins does a nice job of plucking the ball in the air. One of his weaknesses, though, is jumping for balls when he doesn’t need to. Nonetheless, great catch here from Watkins.

However, Watkins is not a player who is going to make a five-yard gain turn into a 15-20 yard gain. He is more of a possession receiver who moves the chains, not breaks off big plays, and this play against Miami shows just that. He’s not a player who accelerates to another speed, and is pretty limited in his creativity with the ball in his hands.

Overall, Austin Watkins Jr. is a player who should project well at the next level, with his ball skills and physicality during routes and at the line of scrimmage. He showed at the Senior Bowl that he can operate out of the slot, as well as as a boundary outside receiver as well. He won’t be a deep threat you can rely on, but if you need someone to pick up a first down in crucial situations, Watkins is your guy.

Games Watched: at South Alabama, at Miami, vs. Louisiana, at Louisiana Tech