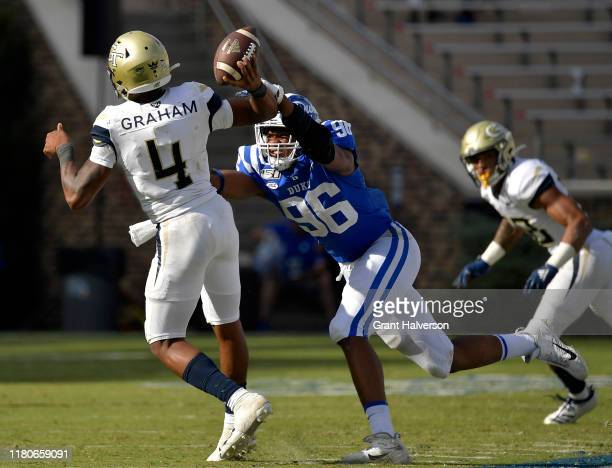 – Has showcased ability to play up on the LOS as an edge rusher as well as a stacked OLB in the box
– Played all over the defensive line from standing up on the edge to head up on the center
– Good arm length (33 6/8”) to get hands on blockers and affect passing lanes
– Instinctive pass rusher that can win with speed and finesse outside or quickness stunting inside
– Has a good long arm move to keep tackles off of his frame in pursuit of the QB
– Can sneak through gaps and around blocks with his frame, having the bend and loose hips to maneuver around lineman as a rusher
– Was a great interior pass rusher to take advantage athletically on interior offensive linemen
– Plays with a motor as a pass rusher or a run defender, pursuing the football with great effort
– Provides great backside pursuit when unblocked on plays going to the opposite side

– Extremely lanky and frail frame that has little to no sand in the pants to anchor against the run
– Will do his best to set the edge, but can and will get displaced by powerful tackles in the run game
– Doesn’t execute counter rushes effectively when hit by blockers due to lack of strength
– Will struggle to win with strength and power on his pass rush if the tackle cuts off his angle of pursuit
– Can be a dead man walking when playing upright, being easily knocked off of his spot
– Had a tough time earning a full-time starting role at Duke, being relegated to more of a situational pass rush role
– Needs to add functional mass and strength to hold up at the next level to avoid being one-dimensional
– Terrible finisher at the QB, missing plenty of sacks due to poor technique and lack of finishing strength
– Got a lot of his sack production on broken plays and second effort rather than winning with clean, technique sacks

– Redshirt Junior prospect from Gainesville, FL
– Father played linebacker at South Carolina and coached for many years at the collegiate level, currently coaches the Chicago Bears’ defensive line
– Redshirted his first year with the Blue Devils
– Had one start in 13 games as a freshman, recording 25 tackles, eight for loss, and three sacks
– Posted 47 tackles, 13.5 for loss, with 6.5 sacks three pass breakups in 12 games as a rotational piece his sophomore campaign
– Tallied 53 total tackles, 12.5 tackles for loss, and eight sacks in 11 starts his junior campaign
– First-team Freshman All-American in 2018, third-team ALL-ACC in 2019 second-team All-ACC in 2020, team captain in 2020

Chris Rumph II from Duke grew up to rush the passer. His father, Chris Rumph, has been a long-time defensive coach at the college level and currently coaches the defensive line for the Chicago Bears. Coach has definitely been in his son’s ear since he started playing the game, and that can be seen in how he plays. Rumph is a natural as a pass rusher, being able to pursue the QB from a variety of locations along the defensive front. He lines up as a traditional edge, but also will play off-ball and in a standup position over top of the guard or center to take advantage of the matchup with his speed and quickness. On this play against North Carolina, we see Rumph head-up on the guard and use an arm over/swim move to avoid the block, shooting into the backfield and wrapping up the ball carrier for a loss.

As a pass rusher, Rumph can be too quick for guards and centers, causing them to lean forward to try and get their hands on him. Here against Miami, Rumph matches up with the RG, and the guard lunges forward as Rumph hits the slap/rip combo to knock away the blocker’s arms and finish on top of the QB for the sack.

Rumph pursues the QB like his life in on the line. He shows great burst off of the ball and closing speed as he approaches his target. Here we see a rep with Rumph on the edge against the Hurricanes where he gets a good step off of the snap, knocks the hands of the RT down, and runs the arc fairly tight into the center of the pocket, where he wraps up the passer for the sack.

Rumph doesn’t give up on the play when initially blocked, showing great second effort as a pass rusher to chase the ball until the whistle blows. This can be seen on this rep against the Tar Heels, where Rumph is initially picked up by the guard neutralized by the LOS. But as the QB rolls out to his right to extend the play, Rumph continues to work, spinning off of his block and chasing down the QB to wrap him up at the ankles for his teammates to rally and take him down. This can be seen as a positive in the sense that Rumph plays to the whistle and shows great effort, but also a negative in the fact that he can struggle to get off of blocks and will have to win on second-effort rushes more often than getting clean sacks. He also doesn’t bring down the passer, which will be highlighted later on.

While the run game shouldn’t be considered a strength or Rumph’s game, he does know how to stack and shed blockers with his long arms to keep them off of his chest. Here we see Rumph engage the tackle at the line and is able to shed inside to make a play on the runner coming through the gap on the inside run play.

Occasionally Rumph would line up as an off-ball linebacker and would rush the passer from the box. However, he also shows great pursuit as a run defender from the box as well, playing chase to the ball carrier and closing on the ball in a hurry. Here we see Rumph fire toward the ball on the pitch, knocking the runner out of bounds for a loss on the play.

Rumph’s long arms not only aid in keeping blockers off of his frame, but he does a good job getting his hands up to affect passing lanes. Here against North Carolina, Rumph comes off of the edge and gets his hands up as the QB releases the ball, batting it down for the incomplete pass.

While Rumph displays great pursuit, his size tends to be a legit issue on many different levels. He can get skinny shooting gaps, but he also can be easily knocked off his spot by blockers, not possessing great contact balance. We see that here as he does a great job shooting inside and crossing the tackle’s face, but he starts to lose his footing as he closes in on the QB, allowing the passer to evade him and extend the play.

He can be easily displaced in the run game by offensive linemen and even tight ends due to his lack of functional mass and play strength. Here against Boston College, we see Rumph get stonewalled coming off of the edge against #80 Hunter Long, getting completely neutralized from making a play on the back.

Along with his thin frame being an issue against the run and staying upright against powerful blockers, Rumph has a legit issue of finishing at the QB. He misses far too many sacks by diving at the passer’s feet or being thrown off by the QB due to lack of finishing strength to bring him down. Here against the Eagles, Rumph plays the rep perfectly, getting his arms extended against the tackle, getting him to go backwards and bull rushing him over into the lap of the QB. Alas, Rumph falls at the QB’s feet unable to bring him down, allowing the passer to find an open man downfield.

I understand Rumph showed a lot of good actually playing with power on this rep, but he also had several other occasions throughout this game where he was unable to finish at the QB. This next clip highlights two chances on the same play with Rumph had the QB in his grasp, but missed on both attempts, failing to bring the QB down.

Rumph is a very difficult evaluation. On one hand, he has natural gifts to rush the passer from a variety of locations on the football field, having the elusiveness to avoid blocks and the closing speed and effort in pursuit to continue to be a nuisance to opposing offenses. On the other hand, Rumph was aided by playing in a rover role for the defense, not playing directly across from a blocker to allow him to run uninterrupted to the ball due to the fact he struggles with size and power getting of blocks as a pass rusher, as well as getting washed in the run game. There are traces of Leonard Floyd in his game as another gangly edge rusher that rushes from all over the field, but Rumph’s athletic traits, measurables, and situational pass rush style more closely mirror that of Dadi Nicolas who came out of Virginia Tech in almost the exact same role as Rumph. Both were used in a variety of ways, possessed similar athleticism, and almost identical size that Nicolas struggled to overcome at the next level.

Rumph can make an impact at the next level for a defense, but it will likely be as a situational pass rusher as a 3-4 outside linebacker with a defense that can be creative in how they deploy him in the formation. He could possibly transition to a 4-3 off-ball linebacker role, but his movement skills laterally and dropping into coverage are well suited for that role. As far as the Steelers are concerned, they normally wouldn’t accept an OLB that is lacking that size and strength to hold up on the edge. However, should Rumph prove to be a viable special teams contributor and play in that situational pass rush specialist role early on, he could earn himself a role as he continues to work to add strength and size to hopefully earn a starting role one day in the league.