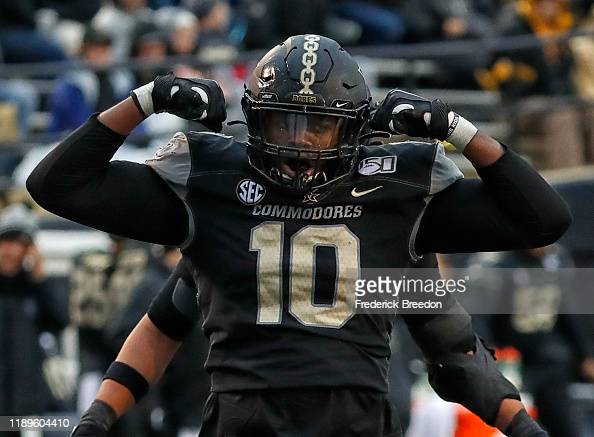 – Fantastic height and arm length (35 1/4” arm, 86 3/8” wing) to engage blockers and keep them off of his chest as well as get hands up into passing lanes
– Lined up all over the defensive line, playing DE on the edge, 3-tech, and even as a nose tackle in obvious passing situations
– Versatility suggest he can play in both odd or even fronts on the edge or inside
– Plays with heavy hands to fight off of blocks
– Plays with a motor when rushing the QB or playing against the run, showing great pursuit of the football in both situations
– Disruptive force that is great at shooting gaps or driving blockers back into the backfield to put pressure on the QB
– Very good at hitting the inside swim move as an interior pass rusher
– Showed gradual improvement with every season on campus

– Needs to improve functional strength and contact balance, ending up on the ground far more than you’d like to see
– Can get upright in pass rush, needing more consistent bend and pad level to set the edge and keep balance
– Hand usage and placement are erratic, not being able to stack and shed consistently or win with a go-to pass rush move
– More disruptive than productive at this point as a prospect
– Needs to mentally progress in terms of the nuances of the game to have the mental aspect catch up with the physical aspect
-Will have to take a redshirt year after suffering an achilles tear

– Senior prospect from Irving, TX
– Four-star recruit coming out of the Dallas Metro area
– Varsity letters as hurdler and thrower on track team
– Parents are natives of Nigeria
– Brother, Dare, also played on the Vanderbilt defensive line Dayo’s first two years on campus
– Played in 12 games as a reserve his true freshman season, recording 20 tackles (17 solo), 4.5 for loss, 2.5 sacks, and one interception
– Started 10 of 12 games played as a sophomore, notching 28 tackles (20 solo), 6.5 for loss, 2.5 sacks, and two fumble recoveries
– Played in 12 games with 11 starts as a junior, recording 45 total stops, 12 tackles for loss, and 1.5 sacks
– Played and started in eight games as a senior, racking up 32 tackles, eight tackles for loss, and 5.5 sacks
– Tore his achilles prior to the Senior Bowl
– All-SEC second team in 2020, team captain in 2020

Temidayo “Dayo” Odeyingbo from Vanderbilt is a great example in scouting of projecting what a player can do at the next level when weighing traits vs. production. When you look at the stat sheet, you see a player that has had frankly a mediocre impact over his four seasons as a collegian. However, as a you watch the tape and see the player on the field, you being to understand why the hype is there for a player to be a better pro that he was in college.

This is the case that is made for Odeyingbo, as he is a physical specimen with the traits and measurables that scouts are going to love. Odeyingbo has an enormous wingspan for the edge position, paired with a long, athletic build that can more resemble a receiver than a defensive end. His long arms aid in keeping blockers off of his chest, being able to hit them with the long arm on his pass rush to close the pocket and counter back inside to the QB. We see that right here against South Carolina, where Odeyingbo gets off the line and begins to run the pocket, keeping his left arm extended to keep the tackle off of his chest and counter back inside for the sack as he runs the tackle far enough upfield.

Along with his long arms, Odeyingbo can be relentless on his pursuit of the football, regardless of whether it is pass or run. He will get covered up by tackles on his initial rush, but his motor continues to run hot, pushing the pocket and finding a way off the block, using second effort to chase down the QB for the sack or run down a ball carrier. We see that here on this clip against Missouri, where Odeyingbo is initially covered up by both the LT and LG coming in to help, but continues to work through the outside shoulder of the tackle, taking on the RB assigned to pass protect as well, and breaking free from the block with the QB scrambling out to the left, wrapping him up and throwing him down to the turf.

We see another play here against the Gators where he is initially blocked by #72 Stone Forsythe, but Odeyingbo continues to work and get his outside arm on Forsythe’s outside shoulder and rip through the block, turning the corner and hitting #11 Kyle Trask as he releases the ball to force the errant pass.

Odeyingbo also shows off his speed and pursuit as a run defender. He is great at playing chase from the backside when unblocked, having the long speed and stride length to chase down runners from behind. Here against Georgia we see him evade the chip block from #79 Isaiah Wilson as he climbs to the second level, keeping his shoulders square to the LOS and reading the play. He sees the handoff of the back, and proceeds to chase down the line, taking a great angle to the ball and getting the tackle for little to no gain on the play.

Another great example of pursuit and effort by Odeyingbo here, as he engages with Wilson on the snap of the ball, but rips off the block back inside and chases down #7 D’Andre Swift, taking a good angle to the ball and planting him into the dirt.

As a pass rusher, Odeyingbo has lined up all over the defensive front, playing from the edge all the way inside to nose tackle for the Commodore defense. He is at his best when rushing inside, shooting gaps against tackles across their face or going against centers or guards that can’t account for his athleticism. We see the former here where he stunts inside on the LT of LSU, hitting his signature inside swim move to get into the backfield and into the face of the QB to force the inaccurate pass.

He can be a load on the inside when he gets a good snap off of the ball, showing great explosiveness and using his long arms to take advantage of stockier, shorter-armed interior blockers. Here we see Odeyingbo absolutely blow up the center off of the snap, running him right back and throwing him to the ground while also going into the back assigned to pass protect, getting cut on the play, but showing phenomenal effort to get up and finish the play by taking the QB to the ground.

For all of his positive traits, Odeyingbo is still very raw as far as defensive linemen go, needing to refine several key areas of his game to be a consistent presence. He likes to pop up out of his stance far too often on tape, lacking the necessary bulk and functional strength to have a solid anchor to sit in against the run. We see that here against the Tigers where Odeyingbo is struggling to hold ground, leaning into the blocker as he stands straight up and getting pushed back on the short-yardage situation.

He can have balance issues on his rush, lacking the sand in the pants and necessary bend to stay low to the ground to win with leverage. Here he rushes outside shade of the LG and gets thrown out of the club and into the arms of the LT, not displaying a counter move or using his hands effectively to avoid the powerful punch by the lineman, and getting displaced because of it.

While he has the long arms to stack and shed defenders, his hand usage is erratic at best, being very inconsistent with his placement and getting off of blocks against the run and on his pass rush. This is why he makes a lot of his plays on second effort rather than racking up technique sacks. Here we see Odeyingbo engage the LT on the snap, getting hands on and arms extended as he reads the play. However, he fails to use his hands to shed off of the block and allows the tackle to build momentum to push him backward, lacking the necessary anchor to sit in against power and getting thrown to the ground because of it.

Overall, that are a lot of things to like about Odeyingbo’s film. He is extremely raw and needs more time and reps to develop his footwork, hand usage, and build up his body mass and strength to withstand blockers at the next level. The good thing is, most of Odeyingbo’s problems are mental rather than physical, and he has shown development over his four years and even in his last season to be that moldable piece of clay that can become a force with good coaching. His measurables, style of play, and level of projection as an athletic defender needing refinement to play at the next level had me immediately think of Tanoh Kpassagnon, currently of the New Orleans Saints, who came out of Villanova as a player that was also a project, but also possessed crazy potential given his traits.

The problem with Odeyingbo is the fact that on top of being raw, he also suffered a torn Achilles tendon in lead up to the Senior Bowl, meaning he won’t see the field in any capacity in 2021. Couple that with the fact he has to get more reps and coaching to develop, this will basically be a redshirt season for him, where you are counting on him learning on the white board rather than on the field.

The Steelers need another edge defender, and Odeyingbo has shown the athleticism and versatility to play DE in a 4-3 or standup LB in a 3-4, as well as kick inside in sub packages. The only question is whether the team would be willing to take him knowing they would have to wait a year for him to even step onto the field. The talent and upside are there for Odeyingbo, but the risk with the injury and the learning curve he has in front of him is there as well. A team would be wise to consider him on Day 3 of the draft and see if they can get him to become a capable starter in the league down the road.