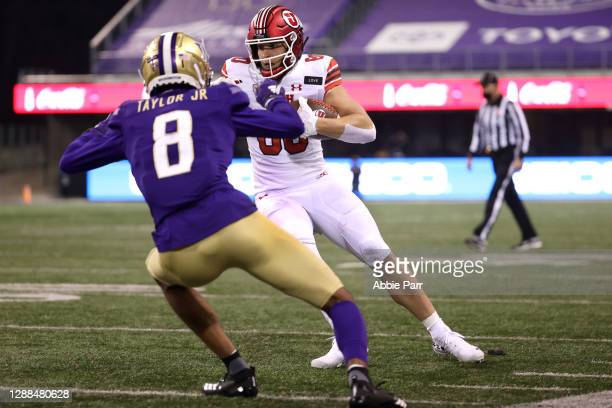 – Quick footwork, mirror ability on short to intermediate in-breaking routes
– Length and timely swipes allow him to break up passes at catch point
– Transitions well from press man on vertical routes with straight-line speed, sticking to receiver’s hip
– Willing tackler in run game, attacks downhill
– Only allowed 43% completion rate, gave up two touchdowns in career as primary defender
– No durability concerns, missed only one game in four seasons at UW

– Struggles stacking and shedding blocks at consistent level on back end
– Needs to improve ability to locate football prior to catch, gets lost in downfield coverage
– Play strength an issue, receivers can out-physical him downfield
– Will need to bulk up at next level, very lean frame
– Lack of ball production, only 10 passes defended and 0 interceptions in career

One of the winners of the 2021 Senior Bowl was Washington defensive back Keith Taylor Jr. All week in Mobile, he was sticky in man coverage, making pass deflections and being physical at the line of scrimmage, and those same characteristics show up on film as well. There were times that quarterbacks did not even test him vertically because of how he transitions from backpedaling to sticking to a receiver’s hip on short or vertical routes.

First play against Stanford shows Taylor’s ability to mirror, be physical at the line of scrimmage and close on the ball with his length. When the catch or pass happens in front of him, Taylor does a much better job locating the football.

This next play against Stanford isn’t a perfect rep from Taylor, but he does a nice job finishing the play with an arm swipe to dislodge the ball from the receiver. He is a little slow transitioning on the vertical route, but his straight-line speed allows him to recover and make the play.

Against Boise State in 2019, Taylor made a fantastic play that nearly resulted in an interception. He allows the receiver to get an inside release, but recovers midway through the route and runs the route for the receiver, and deflects the ball away at the catch point. Locates the ball well in the air on this particular play, even though he struggles with doing so on a consistent basis.

While Taylor is a willing tackler who can make plays in the run game, he relies on tackling runners low, which can lead to missed tackling like it did in the below clip. He misses the tackle after squaring up. His tackling form has to improve at the next level.

Locating the football is Taylor’s biggest knock as a corner. Against Utah, Taylor isn’t in a bad position, after falling behind a few steps after the receiver stemmed the route. But at the catch point, he struggles to get his head around sooner and gives up an explosive play. It’s coachable, but Taylor will have to improve in that area, or teams will target that consistently in the NFL.

Final play from Taylor is a pass breakup in the intermediate passing game. He is patient, waiting for the receiver to make his move up field, flips his hips smoothly, clicks and closes quickly on this curl route. At the catch point, he plays through the hands of the receiver and breaks up the pass. Taylor is sticky in press man.

Although he didn’t test particularly well, Taylor will find a role in the NFL with his length and ability to operate in press man coverage. He covers the short and intermediate routes well, and can turn to run with receivers on vertical routes. However, he is a developmental corner who needs to fill out his frame and locate the football better downfield. He likely won’t be on the Steelers’ radar, but if the cornerback position isn’t addressed in the first few rounds, Taylor would be worth a look early on Day 3.