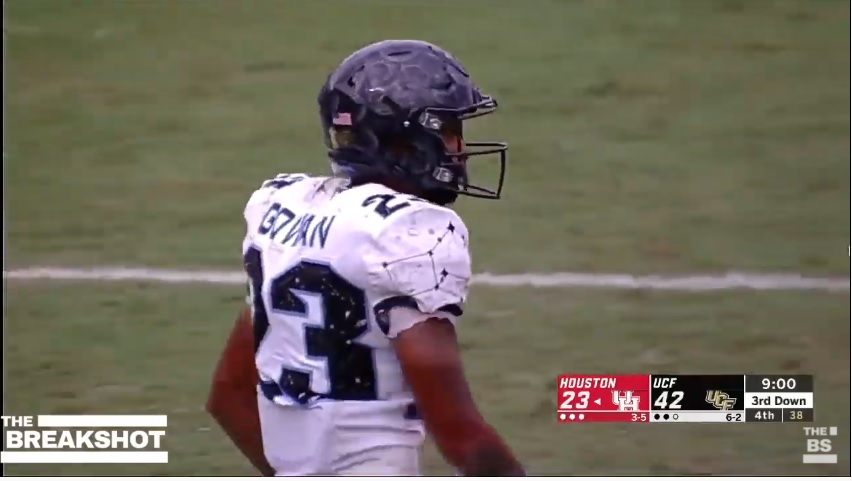 – Physical, press corner comfortable in bump and run coverage
– Shows good hip fluidity despite taller stature, has speed turn to recover in man coverage, able to sink hips and drive on breaking routes
– Patient in press and mirrors release well
– Has power on punch and ability to jam receivers at the line of scrimmage
– Competitive at the catch point, closes well on the play and times jump well, plays through hands and able to separate player from ball
– Versatile, played both outside CB spots, experience playing press man, off man, and zone

– Has frame to support it but lanky and needs to add weight; high-cut, leggy corner
– Below average length especially for his height (31 1/8 inches)
– Average straight-line speed, uses sideline/leverage well carrying vertically but vulnerable to getting beat downfield if he doesn’t win early
– Willing tackler but not an overly aggressive or impactful one, wrap-up type
– Too consistently stuck on stalk blocks in the run game
– Will show some hip tightness when asked to make full turn
– Just one year of playing time, not Day One ready, very limited starting experience
– Wasn’t a ballhawk, two career INTs and one was low-quality, though he does show good hands and body control

Had Tay Gowan played in 2020, he might be a name we’d be talking about a lot more than we are now. He’s one of several UCF defensive backs who will get drafted this year, but probably the third to be taken behind Aaron Robinson and Richie Grant.

Because Gowan has limited tape, basically just his 2019 season, he has sleeper appeal. He has plus ball skills and was very disruptive at the catch point. In a 2019 game against East Carolina, he broke up three passes. Dude has a knack for timing his hands and being able to separate player from ball despite not having great length relative to his height.

Though he’s a taller, high-cut player, Gowan generally shows impressive hip fluidity and ability to mirror releases. When he’s asked to completely flip his hips around, he shows some stiffness, but he’s largely able to make the small-area movements cornerbacks are asked to do. In the first clip, he’s able to mirror this release well. In the second, he drops his hips to drive on this curl.

He’s the RCB (bottom of the screen) in both examples.

And he’s a physical press corner who is able to bottle up and jam receivers off the line, like here versus Stanford. Watch him at the bottom of the screen as the RCB.

Gowan can get stuck on blocks in the run game. He’ll have to work on his overall strength and more importantly his hand use to get off stalk blocks by wide receiver. There were also some glimpses of his rawness. Against Pitt, he’s part of a botched coverage. Thought it was man when it was zone, and this ends in a Panthers’ TD.

And while I think he shows a fluid turn and uses leverage well, his straight-line speed isn’t great. He ran a 4.49 at his Pro Day, which probably translates to low-mid 4.5’s had he run it at the Combine. There’s also the concern over his very limited tape. He has nine career starts and hasn’t played football in 16 months. By the time he gets into an NFL game, it’ll be closer to 20 months. There’s simply not much tape to watch, and that inherently makes a guy like Gowan risky.

My NFL comp for him is former Boston College corner Isaac Yiadom. And Gowan could be a late Day Two selection just like Yiadom was.