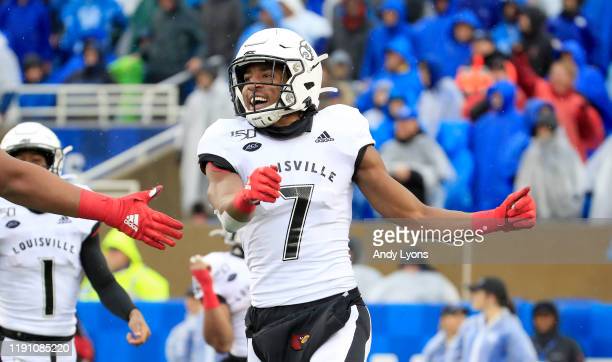 Desmond Fitzpatrick is yet another wide receiver prospect that could be of interest to NFL franchises. After committing to Louisville as a four-star recruit, Fitzpatrick had a very solid freshman season in 2017 with current Baltimore Ravens QB Lamar Jackson throwing him passes. In 2018, 2019, and 2020, Fitzpatrick would go on to put up similar stat lines, with 2018 being his season with the least amount of production and 2020 his season with the most (in terms of receiving yards). Production-wise (over the duration of his entire career), Dez Fitzpatrick was solid yet sporadic, but he did show some polish and promise on tape, as well as at the 2021 Senior Bowl, where he had a productive bowl game. Mixing that with his Pro Day athletic numbers helps weigh in his favor heading into the 2021 NFL Draft.

This first clip is from Louisville’s 2019 season. They are playing Florida State. Fitzpatrick beats (potential Pittsburgh Steelers #24 overall draft target in the 2021 NFL Draft) Asante Samuel Jr. deep. Lined up just next to the offensive line (bottom of the screen), Fitzpatrick builds up momentum vertically with a free release. His QB throws a rainbow ball and Fitzpatrick is able to track it over his shoulder, while slowing up just enough to let it fall into the basket. He juggles it, then brings it in (despite having Samuel Jr. on his back) on his way into the end zone for a score. Great concentration shown from Fitzpatrick.

This next clip is from the first game of Fitzpatrick’s 2020 season against Western Kentucky. Fitzpatrick is lined up field side and has a free release off the line. While his route isn’t shown in the broadcast view or replay, Fitzpatrick’s ball tracking skills are on full display. With his QB throwing a prayer, Fitzpatrick swoops in at the last second to answer that prayer by stealing the ball away from the DB, saving his QB from an interception. On top of making the catch, he finds himself home free with nothing but green grass in front him on his way into the endzone for a TD.

This clip is from the same 2020 game against Western Kentucky. Fitzpatrick is field side. While his route isn’t fully shown in the broadcast view or the replay yet again, Fitzpatrick does an excellent job of coming back to the pass on what looks to be a curl route.  The main takeaway from this reception (in my eyes), is the way Fitzpatrick plucks the pass out of the air with soft hands without slowing down, then immediately turns upfield after making the catch. Confident hands shown.

This clip is from Louisville’s 2020 game vs. Wake Forest. Fitzpatrick (the middle receiver field side) takes a slant to the inside before slicing up the middle of the field. Then, Fitzpatrick has to climb the ladder to high point the pass and quickly bring it into his chest before multiple converging defenders arrive. Despite being swarmed by the opposition, Fitzpatrick holds onto the football to the ground. Another good example of both ball tracking skills and sticky hands.

This clip is from Louisville’s 2020 game against Boston College. With a free release, Fitzpatrick (bottom of the screen) illustrates a solid break (could’ve been even cleaner in my opinion, but that’s being nitpicky) to the inside by sinking his hips while simultaneously swiveling his head to eye the QB. He secures the pass with soft hands and avoids taking a big shot from the middle of the field safety on his way to a first down.

This clip is from the same 2020 game vs. Boston College. Here, Fitzpatrick (out wide field side) does a fantastic job of battling for and obtaining positioning to trap the contested catch. Pressed off the line, Fitzpatrick displays the ability to fight through the defender’s hands, also showing strength to win, positioning right as the ball is reaching his location. He then holds onto the pass despite being forcefully wrestled to the ground.

This clip is from Louisville’s 2020 matchup with Virginia Tech. Fitzpatrick (boundary side) is pressed at the line but utilizes a shimmy in his release, then swipes at the DBs hands to avoid a jam, allowing Fitzpatrick to explode inside, then continue upfield.  Quickly gaining separation, Fitzpatrick now has a free path to continue vertically. His QB spots him and lofts a pass for Fitzpatrick to catch in stride. He then shows some solid speed to finish the play without being tracked down from behind.

This clip is also from Louisville’s 2020 matchup with Virginia Tech. Fitzpatrick (boundary side) is looking to engage and maintain a block, so as to give the RB a chance to maneuver upfield. Fitzpatrick displays a sense of urgency as well as recognition to engage with #24, since the defender lined up on him begins to shuffle backwards.  He then gets low, engages with the block, and maintains a solid base while also looking back and eyeing the RB so that he can shield the defender he’s engaged with away from the path the RB is taking. While the RB doesn’t reach his position, Fitzpatrick was working to complete his assignment. There are a few inconsistencies Fitzpatrick can work to remove from his play in the run game (base, hand placement, footwork) but overall, he shows great effort, even when not directly involved in the play.

This link is for Dez Fitzpatrick’s 2021 Senior Bowl one-on-ones. Fitzpatrick’s route running is on display here.  He displays smooth footwork and some polish as a technician. While he isn’t the type of WR who will win purely based on his athleticism (however, his athletic testing numbers weren’t bad according to RAS), he seems to have a good feel for the nuances of the position (he can still develop further, like every prospect). Playing for the National Team, Fitzpatrick also finished the Bowl Game with the most receptions and receiving yards. This earned him Offensive Player of the Game honors.

This clip is from Louisville’s 2020 game vs. Pittsburgh. It displays one of the questions I have about Fitzpatrick’s potential transition to the NFL level. In college, Fitzpatrick was given a lot of free releases, and while he did show the ability to fight through press on occasion, I think he could struggle when matched up against lengthy, athletic corners who like to jam at the next level. His foot speed/footwork off the line is iffy occasionally when a DB is in his face. In this clip specifically, he (top of the screen) doesn’t display great burst off the line, allowing the DB to open his hips and stay in phase. With the DB running right next to him, Fitzpatrick shoves him in order to create space to make the catch. This results in an offensive pass interference call. No catch.

This clip is from Louisville’s 2020 game against Virginia Tech. Fitzpatrick (out wide field side) has a free release off the line. He’s then able to find some open space in the defense, but he drops the open pass on top of the logo.  Not sure if a defender obscured his vision or not. Regardless, Fitzpatrick did have some concentration drops in the games I watched. He will have to work on that moving forward.

With solid Pro Day testing numbers, solid collegiate production statistically, and also possessing traits that can be further developed, Dez Fitzpatrick could be another potential later-round WR for teams to target in the 2021 NFL Draft. If selected, the team that does so would then need to further develop him, so that he can work towards reaching an even greater level of polish that he appears to be capable of. I do think Fitzpatrick will be good value if he were to go late day three. As was just noted, he has the testing numbers, decent production, and flashes of potential that are worth adding to a roster late in the draft.