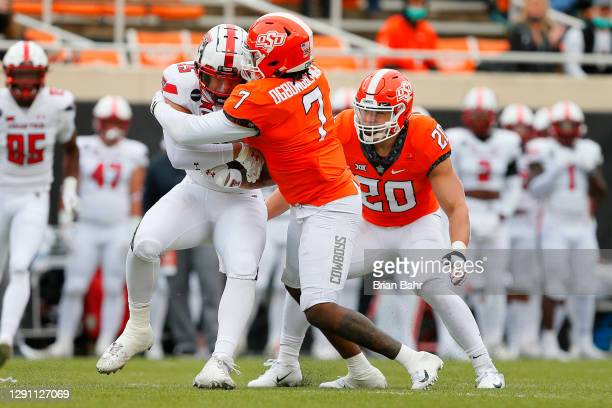 With the re-signing of Vince Williams, inside linebacker may be pushed down the list of “needs” in the 2021 NFL draft. Amen Ogbongbemiga (pronounced AY-men awg-BONG-beh-MEE-guh) is an inside linebacker in Oklahoma State’s 4-2-5 defense. He has solid size and good length.

Against the pass, he was used primarily in Zone coverage, but was occasionally in Man usually on the running back. In Zone, he has solid athleticism and gets good depth on his drops. He plays with his eyes to the quarterback and has solid awareness to get a jam on receivers running through his area. He has solid change of direction to close on throws in front of him and is solid tackler. In Man coverage, his assignment was usually to the running back in the flat or to carry him on the wheel. As a blitzer, he has good acceleration and good timing on green dog blitzes and can get pressure when he has a lane.

Against Iowa State, Ogbongbemiga (7) is on the far side on the 50 yard line and will come on a blitz. His initial lane is blocked, but he displays good acceleration to get the pressure and QB hit.

Against Texas, the outside blitz will force the QB to step up, and he closes the gap quickly and gets the sack.

Against the run, he has good awareness of pullers and lead blockers and reacts quickly to get himself into position to fill gaps and take on blockers. He shows good flexibility to attempt to slip under offensive lineman.  He is a solid tackler on the inside when kept clean and shows good pursuit to the outside and downfield.

Again against Texas, he is keying on the running back on this play, and reacts quickly to beat him to hole and make the stop.

In a game against Miami, he is the linebacker on the far side and shows good pursuit across the field to make the tackle.

Another one vs. Miami, when he is kept clean these are types of plays he can make. Quick into the gap with the agility to bend and make a tackle.

In the games watched, he didn’t show ball skills against the pass, with him not being close enough in coverage to make a play on the ball. In Man, coverage he is very grabby and takes marginal angles to the outside too shallow to handle the wheel route. When blitzing, he needs a lane to make an impact. He loses sight of the ball when reading pulling blockers and was often on the wrong side of the play. When taking on blockers he often uses the wrong shoulder, leaving a gap for the runner, and is unable to shed OL blocks at the LOS or on the second level. Adequate physicality in his tackles and takes poor angles to the outside, leaving him lunging and slipping off tackles rather than running through the ball carrier. He is marginal working through traffic and avoiding blocks in space.

At Texas, he’s on the left side and will pick up the RB and takes a bad angle to the receiver, leaving him forced to attempt to catch up.

At Oklahoma, he quickly reads the pulling offensive lineman, but unfortunately the play goes the other way.

At Oklahoma, here he hooks up with the center and can’t get off the block and gets driven downfield. He needs work on avoiding and shedding blocks.

Overall, Ogbongbemiga has good athleticism, is solid in Zone coverage and is solid coming on the blitz. He reacts quickly to keys, is willing to fill gaps and take on blocks and shows good pursuit all over the field. Areas for improvement include work on his coverage techniques in Man and Zone, not losing sight of the ball versus the run, block shedding and destruction, and better angles to the outside to run through ball carriers.

Ogbongbemiga played primarily inside in college, but I think his best fit as a pro would be as a WILL linebacker where he can react and chase rather than read and try to go through blocks. Get him behind a defensive line that keeps the linebackers clean and in a defense the plays Zone coverage. For Pittsburgh, he would be a depth linebacker to try to develop and use on special teams. If he can improve his diagnosing skills, he may be able to play inside.