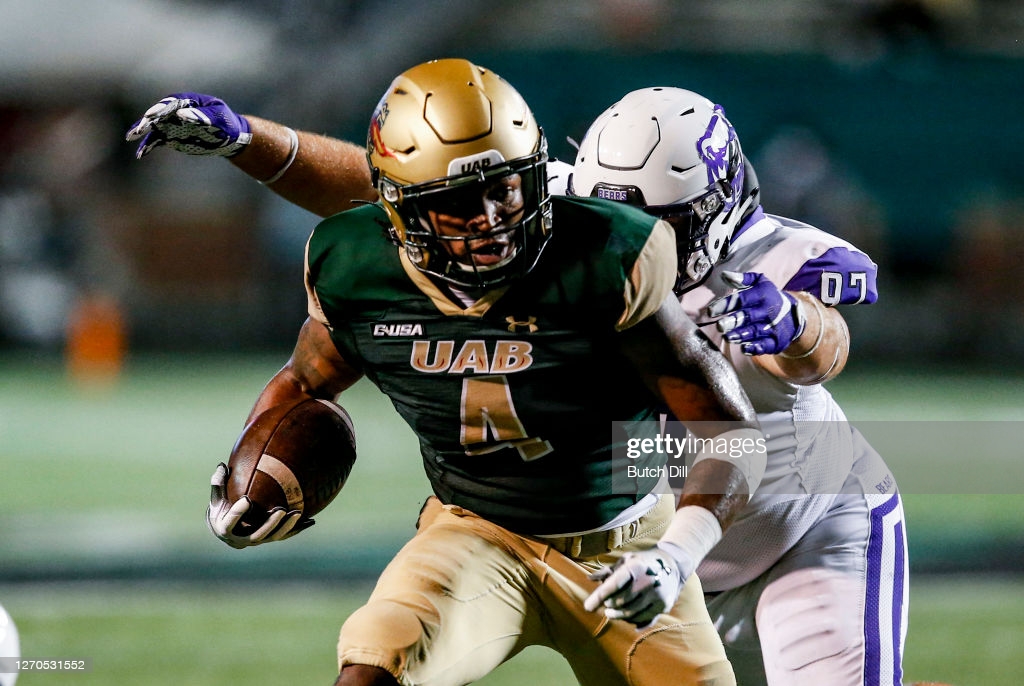 The other Spencer Brown in this draft is the running back from Alabama-Birmingham. He hits all of the boxes of what the Steelers look for in running backs, except for weight. He was highly productive in a Zone running scheme over his collegiate career.

As a runner he has good patience and pace behind the line of scrimmage, effectively reading the blockers to find the best gap. He has a solid jump cut and agility to find the cutback lane. He uses solid acceleration to hit the hole running with good pad level, can slip through small gaps and will lower his shoulder to run though second level defenders.  He’s more of a downhill, one-cut runner and can make someone miss in space with a solid head fake or a stiff arm. He rarely had runs where he took a loss, and generally finishes forward after contact.

Against Central Arkansas, Brown (4) will break this run to the outside, and uses a nice stiff arm to allow him to turn upfield.

At Miami, he displays his patience and vision to run off the leverage of the blocks and get a big gain.

Against Louisiana, here is another inside run where he uses vision and mental processing to read the front side linebacker, and cuts back to find a lane and uses a fake on the safety to get a couple extra yards.

At Louisiana Tech, he finds a good gap, reads the second level block and then runs over the safety for a big gain.

Against Marshall, in third and short he reads the linebacker in the gap in front of him, heads to the right, and lowers his shoulder to get three yards after contact.

As a receiver, he was not used often in the passing game, and it was generally short area routes or check releases.  His routes consisted of sneak, flat, screen, swing and a couple wheel routes. He did show solid hands and the ability to adjust to the ball and get positive yardage after the catch, and used his blockers well on screens. In pass protection he was solid, showing good mental processing to find the free rusher and a willingness to step up. His technique could improve, but he was effective. He also was solid chipping on the edge to help teammates.

Against Central Arkansas, here he starts out in Pass Pro, and then releases to take a push pass from the QB and get about six yards after the catch.

At Miami, he adjusts nicely to this high screen pass, and reads and follows his blockers to get a solid gain.

Again against Louisiana Tech, he scans the defense to find the free rusher, comes across the formation to meet the linebacker, and slows his rush to allow the QB some time to throw.

He has adequate burst and speed overall. He has adequate elusiveness to avoid defenders, and runs with his feet low, allowing him to be tripped up on ankle tackles. Brown doesn’t have an extra gear or long speed to take it the distance. He was very limited as receiver, not really running any routes outside the short area. In Pass Pro, he needs to work on staying square so the rusher doesn’t slip off his block.

Against Louisiana, here is a Pass Pro rep that he diagnosis correctly, but he lunges at the rusher and misses the block.

Overall, Brown has good play strength and relies on his good vision, patience and mental processing to read blocks and can use stiff arms, head fakes, or lower his shoulder to gain extra yards. He is solid in pass pro with the potential to be good, and adjusts to the ball well as a receiver knowing how to get positive yards after the catch. Areas of improvement include avoiding ankle tackles, improving his route tree, and general improvement in pass protection.

Brown hits most of the boxes the Steelers look for as far as production and physical measurables go, and frankly looks like a runner they would usually draft. Along those lines, he is more of physical back, lacking the twitchy elusiveness this team is lacking. He fits nicely in a Zone scheme and should be capable of running in a Power scheme, as well. He could carve out a role as a short yardage and four minute offense running back for a team.

Games Watched: vs. Central Arkansas, at Miami, vs. Louisiana, at Louisiana Tech, at Marshall