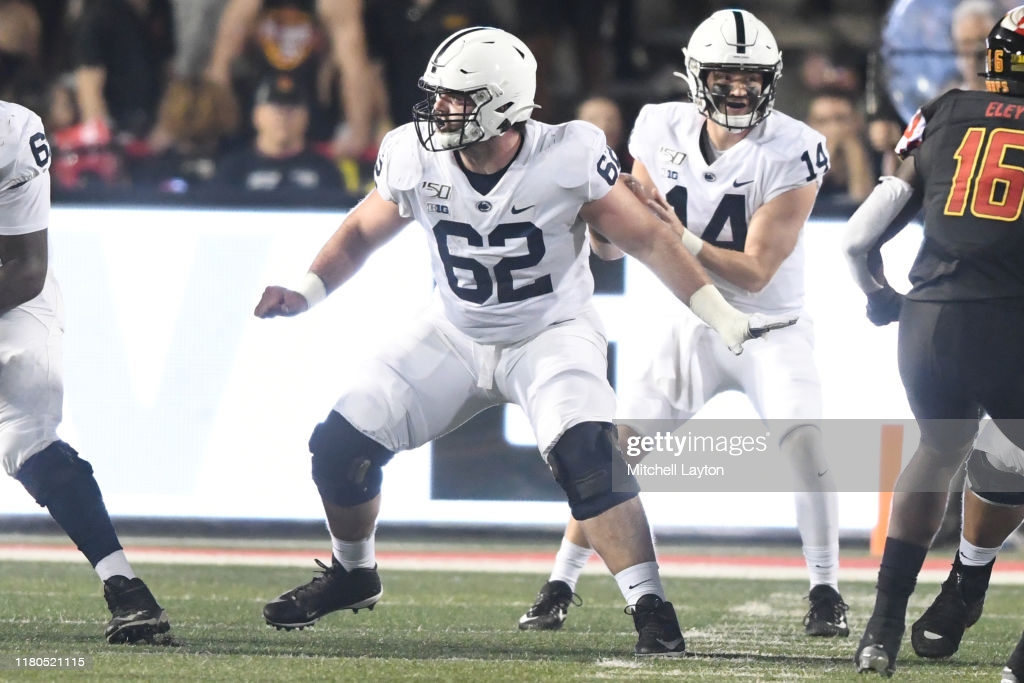 -Good hand size (10”) to latch on and sustain blocks
-Strong player within a phonebooth in close proximity to the LOS
-Has strong hands and first initial punch
-Plays with good hand placement inside the defender’s chest
-Relatively quick out of his stance
-Compact frame has good density, allowing him to play with bend and leverage
-Does a great job using his compact frame to angle defenders, turning his shoulders to create seals in the run game
-Snaps the football cleanly from under center and from the shotgun

-Average-to-below average athlete in terms of open field movement and explosiveness
-Short arms (31 1/2”), limiting his reach and could lead to lunging forward on blocks
-Lack of length can lead to troubles sustaining blocks for extended periods of time
-Will have trouble picking up more athletic pass rushers on the inside consistently
-Isn’t going to be a menace at the 2nd level due to lack of quickness to pick up backers or defensive backs
-Lack of foot quickness can make it difficult to mirror defenders laterally across the LOS

-Redshirt Senior prospect from Birdsboro, PA
-Highly touted recruit out of HS, being the #2 consensus guard prospect in the nation
-Played both on the offensive and defensive line in HS, also contributing on special teams units
-Earned three letters in basketball, also earned all-conference basketball honors as a sophomore and junior
-Made the All-Academic team four consecutive years as a prep athlete
-Brother, Christian, played football at Eastern Michigan before a neck injury ended his career
-Redshirted first season on campus in 2016
-Played as a reserve lineman on the interior his redshirt freshman campaign
-Made 12 starts at center his redshirt sophomore season
-Started 13 games at center as a junior in 2019
-Started nine games at center as a senior
-Honorable mention All-Big Ten in 2019, third-team All-Big Ten in 2020, two-time team captain

Michal Menet of Penn State was a heralded recruit coming out of high school for his play along the offensive and defensive line. One of the top guard prospects in the nation, he decided to opt to stay in-state and play for the Nittnay Lions. After his first two seasons on campus, Menet became a mainstay at center for the team, being elected as a two-time captain and anchoring the ground game for the Blue and White.

When watching Menet, his strong, compact frame stands out on tape. He has natural bend in the hips and has a strong base, being difficult to move off of his spot. On this clip here against Ohio St, we see Menet take on #72 Tommy Togiai in pass protection. After snapping the football, Menet does a great job shooting his hands into Togiai’s chest, keeping his base and staying on him as the rep progresses. Togiai eventually gives up on his rush, backing up away from the play as he couldn’t move Menet off of his spot.

From my previous report on Togiai, we know that he himself is a strong presence in the middle of the defense that does a great job getting penetration against center and guards. However, there are many instances in this game where Menet does get the better of Togiai, another being this play on the option run to the back where Menet and the RG duo block Togiai with Menet leading the charge, taking an nice step toward him off of the snap of the football and squaring him up with great leverage, running his feet and eventually uprooting him and pancaking Togiai to the ground.

There is no doubt that Menet is at his best when asked to work inside a phonebooth, being in close quarters with either guard around him. His hand strength and ability to anchor against power rushers make him an ideal lineman to have in the middle to avoid the pocket collapsing. Here against Memphis we see an example where Menet picks up the interior defender stunting to his gap, sitting his hips down and getting good hand placement to neutralize the rush completely up the middle.

When Menet gets inside a defender’s chest, he has the strength and leverage to move him out of the way against the defender’s will. He is effective in flipping his hips and turning the shoulders of defenders to create a natural seal in the run game, opening up big holes for his back to run through. Here is an example against the Tigers where Menet shoots into the nose tackle and turns him around, springing #4 Journey Brown into space where he takes off, breaking tackles downfield for the impressive TD run.

Another example here in the game against Pitt where Menet does the exact same thing, sealing off the inside with his great block to allow Brown to burst up the middle into daylight, angling to the sideline and picking up big yardage on the chuck play.

While Menet has showcased some real highlights as a run blocker, he has a terrible tendency of not sustaining his blocks for long periods of time. Whether is be his short arms or lack of quick feet moving laterally, there are far too many examples in his film where he either loses the block too quickly on his man or flat-out just can’t get there in open space due to his reach and athleticism. We see the latter here against the Buckeyes where Menet is asked to climb to the 2nd level of the defense to pick up the linebacker, but completely whiffs, allowing #5 Baron Browning to get in on the play.

Or on this example where the QB is trying to scramble out of the pocket and Menet is tasked with trying to pick up #32 Tuf Borland, but Borland easily evades Menet’s reach, diving in to wrap up the QB with Menet running in a circle trying to catch him.

We see the same thing in pass protection from Menet as in the run game. He can be in great position but fails to sustain his blocks due to lack of foot speed and reach. On this play we see Menet help the guard in pass protection on the defender coming up the middle, but he leans forward on his initial punch, not running his feet to mirror the defender. The defender runs right through Menet’s block attempt, arriving at the QB in the pocket for the sack.

What frustrates me when watching Menet is that he will be in good position on a defender in pass protection, but will completely let up on his block, standing straight up and allowing the rusher to get pressure or finish at the passer on 2nd effort. That is exactly what happens here where Menet does a great job running the defender up the arc of the pocket for his QB to step up, but then quits on his block and proceeds to watch his man loop around and put a hit on the QB as he releases the ball.

Here’s another example in the Ohio St. game where Menet is in great position against the defensive tackle, having a good base in pass protection, but soon gets lazy with his feet and his hand placement, allowing the defender to get the edge and pressure the QB to let go of the football too soon, resulting in the incomplete pass.

Overall, I do understand the intrigue with Menet as a mid-to-late round option based on his durability and success as a three-year starter for the Nittnay Lions. When the situation is right, he can look pretty good as both a run blocker and pass protector. However, his lack of athletic upside and inconsistencies at maintaining his blocks are a legit concern to me for a player that has to be a reliable piece in the middle of the offensive line. It almost seems like the motor runs hot-and-cold, absolutely dominating a defensive lineman on one play, then allowing a defender to pressure or sack the QB the next. I understand reach and footwork play a role into this, but when a guy stands and watches his man chase down the signal caller in front of him, that gives off a bad impression.

Personally, I see a little Ted Karras in Michal Menet’s game. Both are smaller centers that have the flexibility to play guard if needed, possessing similar athletic traits and play styles as viable backup options and can start for you if needed. Now Karras won’t be mistaken for ever being a high-end starter in the league, and I see the same being said for Menet. Menet’s best fit is in a duo/gap scheme where he is allowed to work in a phonebooth with blockers around him and limit the amount he has to work in space. He figuratively could develop into a starting-caliber center at the next level, but the expected uptick of speed and athleticism on the interior defensive line he will face would give me cause for concern, already having trouble sustaining blocks at the college level. Should the Steelers pass on center early for other positions of need/value, Menet could be an option to bring in and compete with Finney and Hassenauer but given his physical limitations and work he needs to refine his game, he is better off as a depth piece at center and guard to start his career than a potential year-one starter.