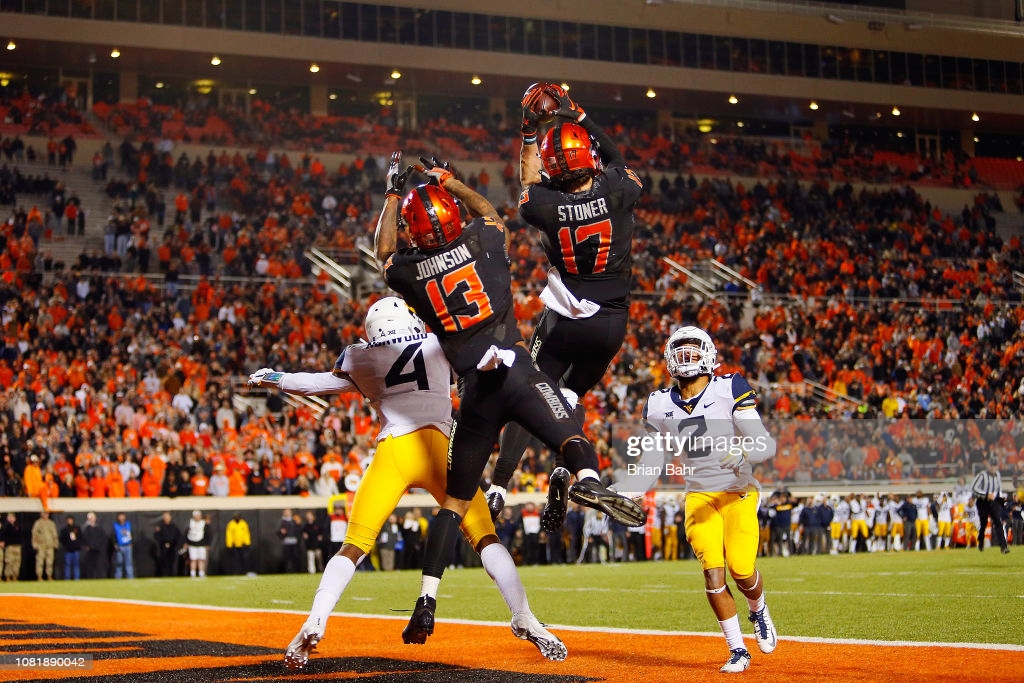 – Physical, reliable slot/boundary receiver that will be a security blanket at the next level
– Undeterred across the middle, plucks the football out of the air with no fear
– Underrated vertical receiver that tracks the football extremely well in the air
– Nuanced route runner with good pace and space; has some short-area suddenness to his game
– Uses his hands well within routes to subtly create separation to win late
– Smart overall football player
– Has some wiggle to his game after the catch

– Short arms for the position and will struggle to win battles in the air at the next level with lack of length
– Lacks functional strength as a blocker and labors to create movement
– Separation not a strong suite in his game
– Long speed overall is an issue and will cause him to struggle to threaten vertically consistently in the NFL; won’t run away from many guys
– Low-ceiling guy overall with no standout trait

Oklahoma State’s offense has quite a few NFL Draft prospects on it, so it’s understandable to consider that receiver Dillon Stoner may be overlooked leading up to the draft.

He really shouldn’t be overlooked though, considering his track record and the traits he brings to the table at receiver with late Day 3 value.

Stoner isn’t the biggest or fastest, but he’s a smart football player that is tuned into the minute details, allowing him to win consistently from the slot or the boundary. He has short arms for the position and lacks overall speed, but he just wins consistently rep to rep.

He’s a guy you want on your team no matter what.

Stoner isn’t the best athlete for the position, as you can see on this dig route out of the slot, but he’s just a gamer and knows how to get open and make the tough catches over the middle.

I like his body control to contort here and make a catch against Texas in 2019 over the middle, regardless of the hit coming at him.

Though he doesn’t have great long speed and won’t create much separation at all on his routes, he is truly a gamer, and makes plays in big spots look easy.

Here against TCU in 2019, Stoner creates just enough room on this flag route to make the diving catch in the back corner of the end zone for the score.

I do like the way Stoner tracks the football when working downfield.

Here against Kansas in 2019, Stoner finds himself wide open down the field quickly off the snap. Watch the way he tracks the football in the air, not running himself out of bounds, never taking his eyes off the ball in the air, and losing very little speed overall.

One area that stood out in Stoner’s tape was the knack he had for making plays in contested catch situations, much like this one against Baylor in 2020.

He does a great job high-pointing the football and fighting through contact, letting the defensive back know about it at the end of the rep.

Again, he’s not going to win many foot races, but he has subtle hand usage himself within routes that allows him to stay clean and create just enough room and win the rep.

Here against Oklahoma in 2019, Stoner works out of the slot and wins vertically on the slot fade, making the tough catch through contact to set the Oklahoma State offense up in great position.

Look at the suddenness here by Stoner in the short area against West Virginia, winning inside quickly in the red zone for the score.

Very rarely did I see that type of burst and explosiveness from Stoner on tape, but it was very pleasing to see that he could win that way quickly off the line.

Overall, I think Stoner profiles as a No. 3 or No. 4 wide receiver in the NFL that can win out of the slot or on the boundary. He’s not the biggest, fastest or flashiest, but he just makes plays on a consistent basis.

Add in the kick and punt return abilities, and you have a guy on Day 3 who could provide great value for the team that selects him.