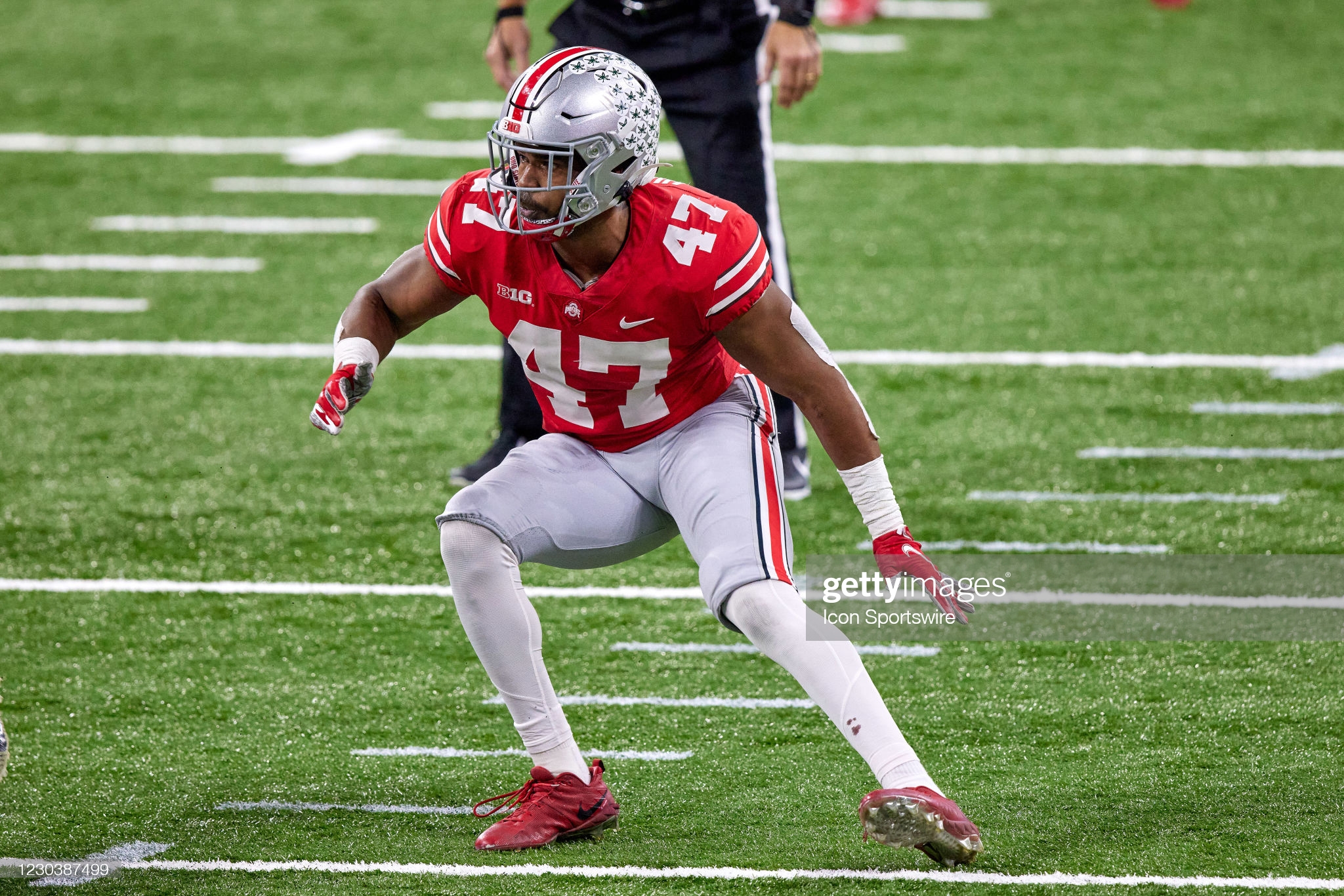 On a roster filled with future NFL Draft picks and featuring elite, first-round players, it was the forgotten sixth-year senior Hilliard who was one of the biggest reasons the Buckeyes made it to the College Football Playoff’s championship game.

Clutch performances in the CFP semifinals against Clemson and Big Ten Championship against Northwestern gave Hilliard’s turbulent ride at OSU a movie-esque conclusion. After arriving as a heralded, five-star recruit, injuries robbed Hillaird of his first two seasons on campus. He spent the next two seasons as a back-up before getting a chance to start the back half of 2020, where he put himself on the draft radar with his play in the postseason.

Hilliard was used primarily as a Sam linebacker with the Buckeyes as a sixth-year graduate player. Ohio State lined him up in the second level across from the tight end or off the edge of the line, and also sent him out into more of a slot role to defend in coverage.

Hilliard showed considerable ability to defend against the run on the outside, and immediately recognize and disrupt screen plays. Here are a pair of stops in the CFP semifinals against Clemson that show Hilliard’s ability to rise to the big stage and play plus defense on the outside. The first comes when lined up just off the edge of the line. Hilliard’s first move is to get outside to deny an open lane toward the sideline. He sheds the block of the tight end, and displays his best trait: His tackling ability.

Meeting Travis Etienne head-on, Hilliard delivers a powerful shot, scooping up Etienne and planting him to the turf, erasing any chance of a broken tackle or Etienne reaching for the line to gain.

Hilliard displays that tackling ability every snap, consistently making powerful contact and sure tackles with excellent form and strength. Here is the second play against the Tigers — Hilliard is lined up out in coverage across from star receiver Amari Rodgers. He diagnoses the screen pass to Rodgers and breaks downhill, again dodging the block of the tight end. Hilliard launches at Rodgers, again making hard contact and bringing down Rodgers without allowing the chance of a missed tackle.

Hilliard’s run defense playing over the line in the box is not at the level of his talent defending from outside the line, but is still a positive aspect to his game. In a pair of plays in the title game against Alabama, he showed a similar ability to stop plays at or behind the line, with strong tackling.

First, aligned across from the tight end on the left side, Hilliard sheds the block as Najee Harris approaches his side of the line, and meets the powerful Harris with strength to immediately take away his momentum for the stop for no gain.

Earlier in the game, he creates strong penetration from his spot again playing across from the tight end, this time from the right side (two angles of the play below). Hilliard uses his burst and acceleration to attack through the lane before the receiver can get over to hit the block. Facing the powerful Harris, Hilliard closes and delivers a strong pop that likely results in a TFL even if Harris doesn’t slip trying to cut away from him.

Hilliard’s work in coverage has both its positives and negatives. The positive comes from his ability to Man up tight ends and even receivers on occasion on routes down the field. Here is his best example, against Northwestern in the Big Ten Championship. Lined up out wide against the tight end, Hilliard keeps himself in position to make a play on the ball. As it arrives, he gets in front of his man for the clutch interception.

Where he needs to improve is in defending shorter passes, and being more aggressive in doing so. Here against Clemson and Alabama, Hilliard surrenders a pair of easy completions. On the Clemson play, lined up against the slot receiver, Hilliard doesn’t play close enough to the break point, allowing an easy completion for the first down. And against Alabama (two angles) in Zone against Harris, Hilliard gives up too much cushion, permitting not only the easy completion but also giving Harris enough space and time to make a move to get free. Once again, the play results in a first down for the offense.

One final issue with Hilliard’s tape is simply a lack of it. A pair of bicep injuries cost him a chance to start his first two seasons, and potentially become a key piece of the defense for more than just the back half of his sixth season. The film he put together in those final games of 2021 and at the Senior Bowl was good, but a larger sample size would be of bigger help to those trying to grade him out as a player.

Hilliard showed the drive to succeed in continuing to pursue his career at Ohio State over six years, despite major injuries that took away the start of it as a prized recruit. That drive was rewarded with a chance to prove himself to be a clutch player for the Buckeyes, and be one of the key reasons why it was Ohio State both making the playoffs, and playing in the title game.

Hilliard showed skill in defending the run and playing in a Sam role for Ohio State, enough to envision him handling a similar position at the NFL level. He uses his athleticism well, and stays in position to attack the run to the inside or outside. He also channels that athleticism in playing in coverage, though improvements must be made there to be an every-down starter in the NFL, and not someone brought in to specifically defend against the run. His tackling ability is more than NFL-ready, and he is capable of making some highlight-reel stops that set a tone for a defense with his plus strength (27 bench reps at his Pro Day).

Hilliard will have to continue fighting an uphill battle in his career. He has to overcome a lack of film from his college years, and in the NFL would be undersized in every metric except arm length. Because of that, Hilliard is not a strong player to bet on being drafted on Day 2. He could go early on Day 3, however, potentially even as high as the middle of Round 4. Whatever team drafts him will have a player who can be a backup as a rookie and core special teams player, and a potential starter if they can build off of the level of play he displayed when finally getting his chance to start for the Buckeyes last season.