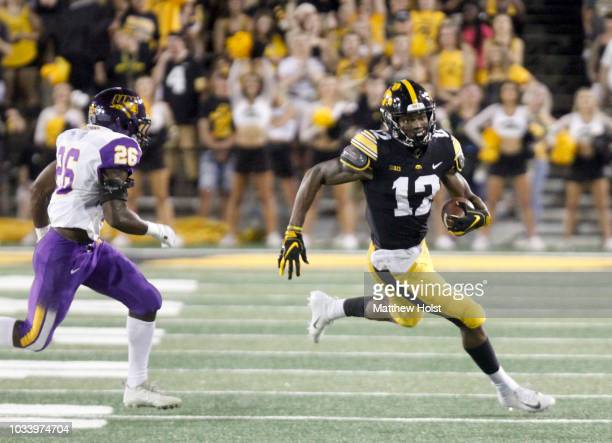 -Very explosive athlete (44” vert, 135” broad) that can ply above the rim in contested catch situations
-Physical specimen with the size and play strength (22 reps) to win combative catches against man coverage
-Has great body control in the air when going up for jump balls and when working along the boundary
-Has the size and catch radius to be a viable back-shoulder catch receiver near the red zone
-Can make acrobatic catches over top a defender or when a defender may be holding his arm down
-Runs hard after the catch, willing to put his shoulder down to try and break tackles
-Great physical blocker on the outside that has the profile to be a key special teamer as well
-Has ability to be a better pro than college player given the Hawkeye passing attack has been mediocre at best
-Got open far more often than expected, but QB couldn’t put the ball on him
-Great football character and locker-room presence, carrying himself like a professional

-Has average to below-average deep speed (4.56-4.62 40)
-Isn’t the quickest receiver when it comes to getting off of the line, lacking that short area change of direction ability you like to see in more refined route runners
-Won’t be making a lot of people miss in open space after the catch
-Needs to learn to better stack corners at the LOS and get off press
-Can be quicker out of his breaks, limiting the amount he rounds his routes
-More of a projection than a sure thing at this point, having minimal college production in four years
-Frequently dealt with nagging injuries while with the Hawkeye Football Program

-Senior Prospect from Lake Cormorant, MS
-Played both as a WR and punter for his HS team
-Was an impressive track athlete in HS, posting a career best high jump of 6-8 as a senior and won state championship in high jump (6-6) as a senior after placing second as a junior
-Saw action in only three games as a true freshman, recording three catches for ten receiving yards
-Started all 12 games in which he played as a sophomore, missing one game due to injury and recorded 28 receptions for 361 yards and two touchdowns
-Saw action in nine games with seven starts as a junior, missing four full games and majority of one additional game due to injury, hauling in 37 receptions for 439 yards and five touchdowns
-Started in all eight games as a senior making 23 receptions for 231 yards and two touchdowns
-One of nine seniors named to 2020 Leadership Group

During my time in Iowa City in the spring of 2019, I could tell right away that WR Brandon Smith stood out from the rest of the skill position players on the current roster. He had a rocked-up body without an ounce of body fat on his lean, chiseled frame, looking the part of a physical specimen at wideout. He was quiet most of the time, yet very respectful and took instruction from coaches well on every occasion. While looking the part of a freak on the perimeter, Smith often showcased the same in workouts and practice settings for everyone to see. He was one of the most explosive players on the team, having the highest vertical leap and broad jump of anyone during spring testing, that included players that had just declared for the NFL Draft and were training for their upcoming Pro Day.

When you watch Smith on tape, this same explosiveness jumps off of the screen. He plays above the rim as a wide receiver, having the leaping ability and the size to body up defenders in jump ball situations. Here on this play against Miami of Ohio, we see Smith go up for the jump ball in the back of the end zone, hauling in overtop of the corner on the back-shoulder throw.

He can make difficult catches in traffic and to adjust to poorly thrown balls by the passer. During his time with the Hawkeyes, Smith had to deal with inconsistent play at times from his QB, but still made the most of his opportunities by making catches away from his frame, having strong hands at the catch point to bring down the grab. Here against the Nittnay Lions, we see Smith run up the seam in man coverage and go over the corner’s head and catching it on his helmet while falling into the end zone for six.

Smith has made a knack for making impressive, highlight reel plays. He often had to adjust back to inaccurate passes in order to have a chance for his passer to complete his throws. We see that here vs the Gophers where Smith gets a step on his man at the top of your screen, but has to come back to the underthrown football, snagging the ball off of the defender’s backside and reeling in the difficult catch in contested coverage.

Smith is used to having to win dirty in combative catch situations, playing in close quarters and having to jostle for position with the defender to make a play on the ball. Due to his size and strength, smaller defenders can have a tough time staying on top of him when the ball comes in, resulting in the defender panicking and grabbing Smith to prevent the big play. However, on this play against Maryland, we see Smith being able to play through the obvious pass interference penalty, catching the ball in the end zone while having one arm hooked by the corner covering him.

Smith is a tough receiver that is more than willing to work the intermediate quadrants of the field as well as stretch the seam. Having good play strength, he can be a load to bring down as a run-after-catch guy. Here we see Smith catch the drag concept and get the corner on the first defender, then cut it upfield and plunge into the end zone with multiple defenders converging on him, delivering body shots and he pushes through for the score.

He is effective on comeback routes, using his size and length to leverage defenders and get them going backward to respect his ability to win vertically, then plant hard and turn back to the ball. Here against Minnesota, we see Smith catch the curl route past the sticks with a couple yards of separation for the 1st down.

Being that Smith played for the Iowa Hawkeyes, you can about imagine that he has done his fair share of blocking over the years for the run-heavy offense. He has embraced his role in the run game, using his size and strength to his advantage as a capable blocker that will engage defensive backs on the outside and look to drive them back to spring the running back. Here against Michigan State, we see Smith pick up the block on the outside run play to the right side, getting his hands on the defender’s chest and proceeds to drive him back through the whistle as the back gets enough space to pick up the 1st down.

Now Smith is pretty raw when it comes to a technician. He can show off quick feet from time to time, but his short area change of direction needs work. Here against the Spartans we see Smith try and give the head fake to the corner at the bottom of the screen but is unable to shake him at the line as the defensive back stays in-phase with Smith on his route.

Despite being very explosive as an athlete, his deep speed isn’t great, and he can have a tough time stacking defenders and getting on top of them to win vertically. We see that here on this two-play sequence where Smith is unable to separate from his man on both occasions, one being on the comeback route and the other on the vertical concept to the end zone.

Overall, one could look at Smith’s stats in four years with the Hawkeyes and say that he doesn’t deserve a roster spot for a team in the league. However, he dealt with a bunch of nagging injuries during his time there, and also played in a run-heavy offensive system that failed to capitalize on his athletic traits, often being plagued by inconsistent QB play. Should Smith get the opportunity to play with a more accurate passer that will put the ball up for him to go get it as a chain mover over the middle and a jump ball specialist along the sideline and in the red zone, Smith could earn himself a role in a vertical passing game as a physical presence an offense can turn to. His athletic traits, play style, and measurables are eerily similar to that of Mohamed Sanu who has been a steady contributor for the Bengals and Falcons over nearly the past decade in the league.

Pittsburgh may not need a receiver immediately given the resigning of Juju Smith-Schuster, but considering he and James Washington are both scheduled to hit free agency next year, Smith could figuratively be a replacement for Washington’s role as a deep threat that can win combative catch situations and also be a positive as a plus run blocker and likely special teams contributor who can take Chase Claypool off of coverage units. He needs development and refinement of his game to be an every-down contributor, but given his skill set and his athletic upside, a team would be wise to take a gamble on Smith later in the draft as a player that can be a better pro than he was in college.