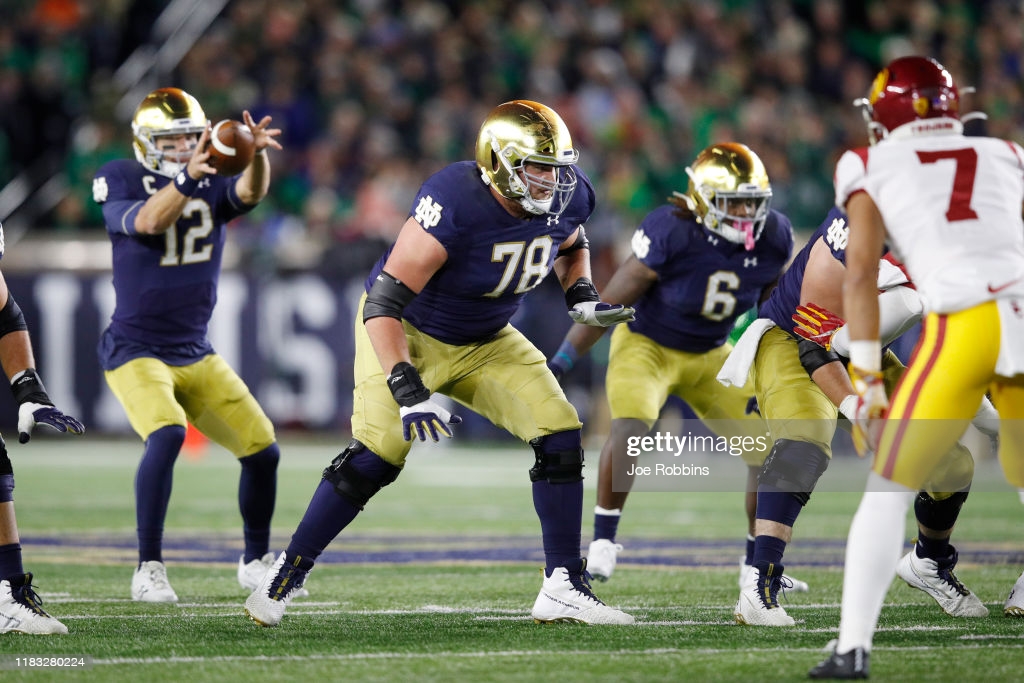 – Good arm length (33 1/2”) and great hand size (10 5/8”) to engage blockers at the LOS and lock onto their pads with a strong, forceful grip
– Has the size and length you look for in an NFL-caliber lineman
– Has good play strength at the point of attack in the run game
– Possesses a strong initial punch with the length and power to shock defenders back
– Effective down blocker with the size and power to displace defensive linemen out of the gap
– Can turn the shoulders of the defender to create a seal in the run game for his back
– Well-utilized on combo blocks with the center up to the backer in the box or when tasked with double teams in pass protection

– Below-average athlete when it comes to speed and explosiveness
– Isn’t the fleetest of foot moving laterally in pass protection when facing defenders one-on-one
– Will overextend and lean forward on his pass sets rather than sit down and anchor
– Lunging forward leads to missed blocks or easy counters by pass rushers
– Frequent waist-bender in pass protection and when pushing forward in the run game
– Isn’t the most fluid mover in space on screens or when working to the second level, causing him to miss picking up backers or defensive backs

– Redshirt Senior prospect from Cincinnati, OH
– Recruited as a top-10 consensus OT in his class
– Redshirted first season on campus
– Started 12 of 13 games at right tackle as a redshirt freshman, being part of the group to take home the Joe Moore Award
– Kicked inside and started 10 of 12 games at right guard as a redshirt sophomore
– Started the first seven games in 2019 before suffering a season-ending sprained MCL in his left knee
– Started 10 of 11 games played at right guard, missing some time due to an appendectomy
– Third-team AP All-American and first-team All-ACC in 2020

Tommy Kraemer out of Notre Dame is one of the four draft-eligible big men up front to declare after an illustrious career in South Bend. Having been a member of the Joe Moore Award-winning line that featured Quenton Nelson and Mike McGlinchey and also a part of this stellar group that was a finalist for the award this year, Kraemer has been a mainstay on a productive unit throughout his time in college. A touted recruit out of high school, Kraemer was initially recruited as a tackle and played there his first season on campus on the right side before transitioning inside to guard for the rest of his time with the Fighting Irish.

When evaluating Kraemer’s game, his size and strength stick out right away. He looks the part of an NFL offensive lineman, possessing the length, mass, and mean streak to move people off their spot. We see that here on this goal line play against Alabama, where Kraemer gets a surge up the middle, driving his man back into the end zone and allowing his back to run behind him for the score.

Kraemer has a strong initial punch off of the snap and has big, strong hands to lock onto his target and move him where he wants to go. We see that here on this rep, where Kraemer is met at the line by the defender stunting inside, but latches onto his chest, turning him inside away from the play and planting him into the turf.

He does a great job displacing large individuals in the middle of the defense, turning their shoulders and creating a natural seal in the run game, kicking them out of the play. We see that on this rep where he makes #94 D.J. Dale run the arc out of the play and away from the back.

We see the same thing here on this move vs. the Tigers, where Kraemer is able to get the reach block moving out to the right, getting his shoulder turned on the defensive tackle and sealing him off from the runner.

Kraemer does a good job when asked to work double teams with the center and have either one work up to the backer at the second level. Here we see Kraemer and the center work on #58 Christian Barmore, where the center gets a quick chip on Barmore as he climbs to the backer, but Kraemer proceeds to drive the defender back nearly 10 yards.

In pass protection, Kraemer does OK with his long arms and strong punch to neutralize defenders on their initial rush. However, as the play extends, Kraemer can have trouble moving his feet to mirror defenders, and will tend to lean and overextend to stay engaged rather than sit in and anchor on his block. We see this here on this play against Clemson, where Kraemer initially stops the defender right in his tracks, but stops moving his feet as #12 Ian Book holds on to the ball, allowing the pass rusher to get his outside shoulder as he tries to lean forward instead of moving his feet, allowing the defender to pass him and get pressure on the QB.

Another great example where Kraemer is in good position on his block, but lunges forward and doesn’t move his feet, allowing the defender to get his outside shoulder and play chase to the runner in the backfield.

Another example of Kraemer standing too tall and not moving his feet, allowing the defender into the lap of the QB.

While Kraemer has shown the ability to work in space and climb to the box, he isn’t the most agile blocker, overrunning defenders on occasion or not possessing the footwork to put a body on a linebacker or defensive back that can evade him. We see that here on this play, where he climbs to the second level after getting the chip block on the DT, but can’t square up the backer and misses him as he scrapes down in pursuit of the ball.

Overall, Kraemer fits the mold as a college offensive lineman that was good enough to not be the straw that broke the camel’s back for a great group, but also was never the key reason that group was as successful as it was. His length, size, and play demeanor should get him drafted to a team that likes to run a duo/gap or power blocking scheme, but he shouldn’t be asked to come in and start right away. Sure, he has good power in his punch and can displace defenders in the run game, but his constant lunging forward on blocks and inability to move his feet in pass protection could lead to bad misses and his signal caller getting hit too often if he doesn’t clean up those issues.

Pittsburgh could figuratively target Kraemer in the late rounds as a potential backup to Dotson or DeCastro on the outside, and can possibly play tackle in a pinch with the experience lining up on the right side. However, given his limited upside and the fact they signed Rashaad Coward, who has displayed promise during his time at guard in Chicago, I would personally suggest allocating that draft capital elsewhere to other positions of need or remaining value.