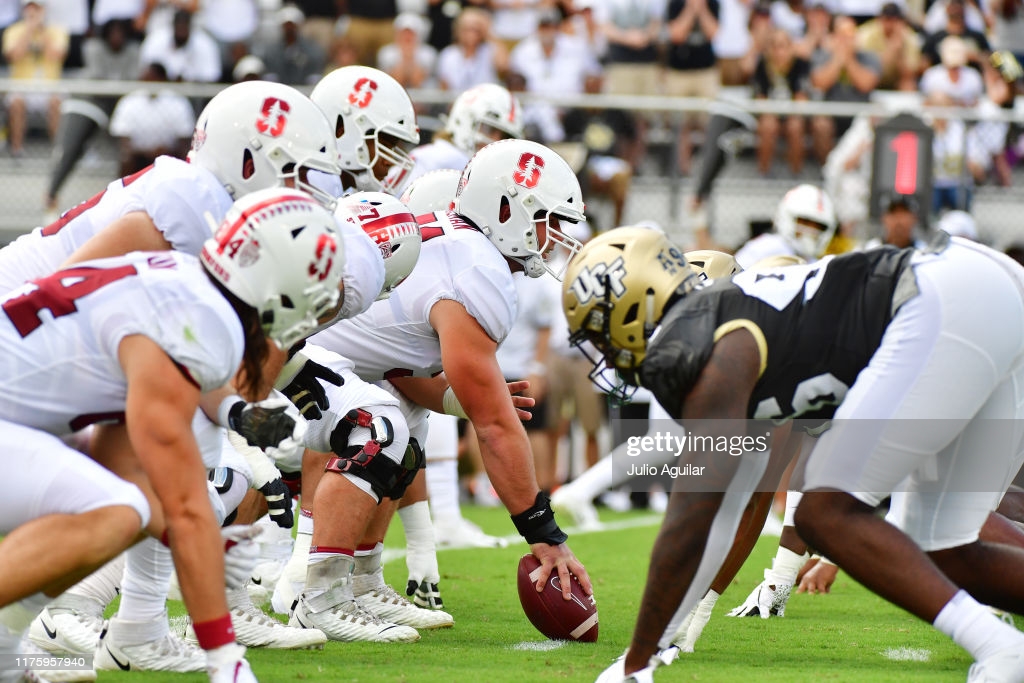 – Average play speed for the position (5.12 40), but shows good explosiveness for the position (33” vert)
– Great hand size (10 1/2”) for grasping and snapping the football, as well as latching on defenders as a blocker
– Good upper body strength (33 reps) with a strong initial punch
– Delivers clean snaps whether from under center or in the shotgun
– Good technician with his hands as well as his feet, playing under control and with consistent technique
– Has great hand usage in terms of accuracy in his punch landing on the defender’s torso
– Does a great job sealing his blocks by turning the defender’s shoulders to create running lanes
– Plays with good hip bend and leverage to sit into his blocks
– Drives his feet on contact in the run game, showing great effort to get a forward push
– Effective when asked to down block and wash defenders out of the way with his leg drive and effort
– Fluid mover that can get out in space and work to the second level of the defense
– Has played and started some games at guard

– Arm length (31 1/2”) is suspect in terms of reach to make first contact at the LOS
– Undersized in terms of weight to sit in and anchor against big power rushers on the interior
– Will get walked back into the lap of the QB on the bull rush by superior athletes on the interior
– Can have problems displacing large nose tackle off their spot in the run game due to lack of size and functional strength
– Needs to add more pop in his blocks and play with a higher level of power to consistently win at the next level
– Base can get a little narrow at times in the run game, leading to contact balance issues and trouble staying upright around trash

– Redshirt Junior prospect from Salinas, CA
– Son of former Stanford and San Francisco 49ers offensive lineman Chris Dalman, who also has been an OL coach after retirement
– Top 10 center recruit nationally coming out of Palma High School, played on both sides of the line
– Also competed as a track athlete in H.S.
– Redshirted first year on campus
– Started four of seven games played in 2018 as a redshirt freshman, two at center and two at right guard
– Started all 12 games at center for the Cardinal as a sophomore
– In shortened 2020 season, started all six games at center as junior
– Second-team All-Pac-12 in 2019, first-team All-Pac-12 in 2020, Pac-12 All-Academic first team in 2018, Pac-12 Fall Academic Honor Roll in 2019, team captain in 2020

Drew Dalman from Stanford looks to be the next in line of Cardinal blockers ready to make the transition from college to the pros. While he has undoubtedly improved and developed his technique during his time in Palo Alto, there is no denying the highly-touted recruit received some tricks of the trade growing up from his father, Chris, who also is a Stanford alum and played for the 49ers for seven seasons before hanging it up to get into coaching the offensive line at the H.S., college, and professional levels.

Having that wealth of knowledge in your own home must have done Drew wonders growing up having his father on the sidelines, and you can see the refinement in his game on tape.

Dalman is a quality technician at the center position, delivering clean snaps out of the gun and also from under center. He has a quick first step out of his stance, possessing the hands and footwork to be in position to pick up key blocks consistently. We see that on this clip against Washington, where Dalman delivers the clean snap and takes a side step to the right, getting great hand placement on #95 Levi Onwuzurike and turning his shoulders just enough to seal him off to allow his back to make the cut up the middle and reach pay dirt.

Dalman does a great job using his leverage and accurate hand placement to turn defenders away from the play, creating a seal in the running game to spring his back. Here on this clip against the Huskies this past season, we see Dalman get the reach block on the NT, working to get the outside sealed on the option run, eventually turning the defender’s shoulder and allowing the back to run off his backside for extra yardage. Had the back had better vision on the play to bounce it to the left instead of running into Dalman’s back, there is a good chance he could’ve scored.

While undersized for the position, Dalman has no issues when it comes to effort in the run game. He runs his feet on contact well, getting good hand placement inside the shoulder pads and sustaining his blocks for the length of the play. He is very effective when asked to down block due to his leg drive as you can see here on this rep against Cal.

Along with leg drive, Dalman is a fairly fluid mover in space for the center position. By no means is he a freak athlete with phenomenal quickness, but he does a great job when asked to pull, get out in space on screens, or climb to the second level to pick up a linebacker when on a combo with the guard. We see the latter here where Dalman goes straight ahead to get the backer, and angles his shoulders away from the play, running his feet on contact and taking the defender out of the play for the back to get past the line and into the end zone for the score.

We see similar impressive movement skills on this rep vs. the Golden Bears where Dalman snaps the ball and quickly pulls to the right side, picking up the defender on the edge and walking him back clear out of the play.

California was one of my favorite games to watch of Dalman, as nearly every play you saw the motor to get on and sustain his block from snap to whistle. His leg drive and tenacity in the run game can’t be understated, as you can see on these two examples of Dalman literally running defenders out of the club.

His ability to run his feet on contact given his size is impressive, but he does have issues with his feet getting too narrow, thus limiting his base and causing him to have balance issues with contact or trash flying around him at the LOS. Here we see Dalman walking back the NT with great leg drive, but the defender gives him a club on his inside shoulder to counter back, getting Dalman off of his feet and causing him to lose balance. Another defender comes in from the backside missing the tackle and runs into Dalman’s legs, sending him to the ground. There isn’t much for Dalman to do in this instance, but this foreshadows other issues in Dalman’s game.

While Dalman excels as a technician, his lack of size and functional strength tends to be his downfall when asked to take on big power rushers on the interior. He plays with a fair amount of bend and anchor, but size and strength can stand him up and push him back with regularity. Here we see Dalman have good position against the Washington NT, but he still gets walked back into the lap of the QB, leading to the ball coming out quick and resulting in the incompletion.

Here’s another example in the same game where Dalman comes off the ball hard with good leverage, but the defensive tackle gets his hands on Dalman first, getting underneath his pads and uprooting him from the ground and planting him into the turf.

Overall, Dalman is a consistent presence that has the smarts and football character to be an asset in an OL room at the next level. He has experience playing guard in college and is seasoned at playing center, offering some potential versatility. However, his lack of size and ability to handle sheer mass and power at the next level caps his ceiling, and likely pigeonholes him to more of a zone-based system that focuses more on movement skills from their centers than size and strength to neutralize power rushers inside.

A pro comparison that stood out to me was new Kansas City Chiefs center Austin Blythe, who is another undersized interior offensive lineman that has experience playing both guard and center, is technically refined as a blocker, but also is undersized and can struggle with power on the interior. Blythe has carved out a good role as a capable starter at center during his time with the Rams, and Dalman can likely aspire to do the same.

Given Pittsburgh’s affinity to have larger, more athletic centers in the past, it can be hard to picture Dalman wearing black and gold. Sure, he has the skillset to earn a starting role in the league with the right team, but there has to be a scheme fit. Pittsburgh doesn’t traditionally run a zone-heavy system with its rushing attack, normally favoring duo or power in the past. Should they look to spread things out more under Matt Canada, Dalman could potentially be a fit.

However, given their desire to be “big and mean” upfront, Dalman’s limitations with his size, while he plays with a lot of tenacity and grit, may not be best suited for what the Steelers are looking for. Still, he likely will go and develop in a system that will use his strengths and mitigate his weaknesses, and we can expect to see him get starting action at some point in his NFL career.