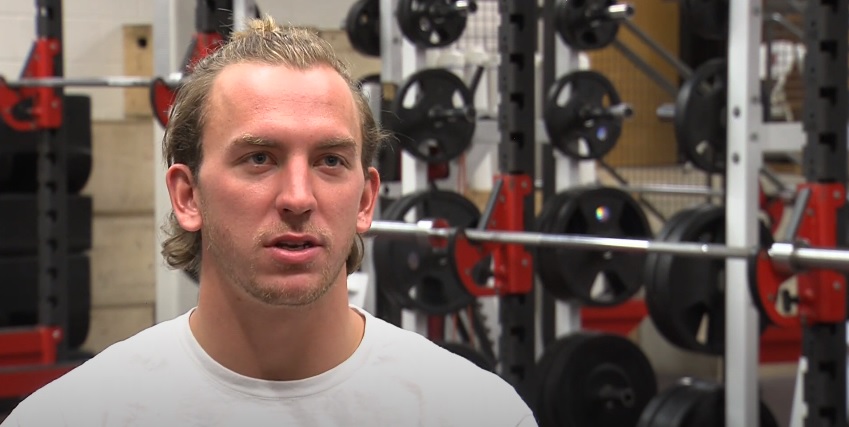 Among the profiles of players in the 2021 NFL Draft class, few are as interesting as Zach Davidson’s. A towering target out of lesser-known Central Missouri in Division II, Davidson is the only player at that level (and one of the only prospects in NFL Draft history) who served both as his team’s starting tight end and its punter.

Despite coming from a small program whose lone notable NFL alumni is Delanie Walker, and seeing his most recent season canceled because of COVID-19, Davidson has used the build-up to the 2021 draft to grow his stock into bona fide candidacy to be the highest draft pick in his program’s history (above 153rd overall).

Beginning his career and being recruited to CMU strictly as a punter, over three years Davidson grew into his team’s tight end. The Mules lined him up off the tackle on either side of the line, and weren’t afraid to put him behind the line as an H-back. Davidson set program records and was named an All-American at TE by the end of his career. His story already one of the best and most unique in the class, he was one of the top performers at the College Gridiron Showcase, and then solidified his status as a sleeper pick with impressive metrics at the Missouri Pro Day.

Davidson is very athletic for the tight end position and given his size. With a high level of awareness to find weaknesses in coverage, he uses his athleticism to beat defenders and rack up yardage after bringing in receptions, with a nose for the end zone and making big plays.

Here is a play that showcases many of his positive traits: His athleticism, deceptive speed, ability to elude tackles and gain extra yardage, and a knowledge of playing along the sideline. Against Central Oklahoma, Davidson lines up as the H-back. He runs a simple route out to the right flat, making a catch headed toward the sideline. Showing off his COD ability, Davidson eludes the tackle to force him out, and uses his burst to accelerate away from three other defenders. The rest is a sprint down the sideline, avoiding being sent out by the final defender ahead of him. (A simpler summation of the play comes from the game’s announcer, who said, “They’re [tight ends] not supposed to be able to do that.”)

Davidson knows how to play against both Man and Zone coverage, and can find weaknesses in either. Here are two plays from his penultimate collegiate game, in the 2019 Division II playoffs against Indianapolis. In the first, he is lined up off the left tackle, and draws the safety in man coverage. Davidson eats away the cushion quickly, and uses a jab step to the left to get the DB off-balance. Having his defender beat, Davidson accelerates past, getting favorable position and drawing the interference penalty (though he fought through the PI to make the catch and score, anyway).

In the second play from that game, Davidson shows his skill at reading a Zone defense, and finding an open area to settle in. Again next to the left tackle, Davidson gets beyond the linebackers to the second level, finds an empty space over the middle, and turns for the catch. From there, it is another show of athleticism and COD ability, juking one man before reversing field for an additional seven yards.

One type of play where Davidson excelled for the Mules was when he was asked to chip block off the snap, before sneaking out on a route for a short pass. Two plays below illustrate how he handles those calls, from different alignments. In the first, against Washburn, Davidson is lined up next to the left tackle. He meets the left end off the line before disengaging and running by the linebackers for an easy five-yard touchdown.

The second play comes with Davidson playing as an H-back vs. Central Oklahoma. He comes out to chip the blitzed off the edge, before releasing to the flat. His quarterback hits him as a safety valve, and he gains the first down on third and long.

There are areas of Davidson’s game as a receiver that need work, not unexpected for a player with only one year as a starter there. His route running needs polish, and he will round routes rather than making an aggressive cut to separate at the break point.

He also doesn’t display a consistently aggressive attitude when going to bring in the ball. He has the size and skill to go up to get the ball, but will often let it come to him rather than get vertical. This allows his defenders an extra moment to recover and affect the play.

One example comes in that postseason game against Indianapolis. A replay angle shows Davidson with his man beat on a deep route to the end zone. Rather than go up to get the ball, with a high percentage of doing so because of his size advantage, Davidson lets it descend to him. In that extra moment, his defender gets there to try and disrupt the catch. It is still a play Davidson should have made and usually does, but on deep passes, he has to get vertical more often to eliminate a chance of his coverage closing any separation.

Where Davidson needs to improve significantly is as a blocker. His frame is long but thin, and he engages players with a strength disadvantage against both linemen and many linebackers. That disadvantage keeps him from driving many players away, and limits him to just being able to steer them from the lane and oncoming runner.

Here is what a lot of Davidson’s best blocks look like. This comes against Washburn, with him lined up in the C gap between the right tackle and second tight end. Davidson picks up the end, and is able to steer him away from the designed lane and keep him engaged until the RB is through. He doesn’t drive him far away from the play, just gets him cleared enough for the RB to advance safely.

There is a limit to how long Davidson can retain those blocks. Above, he is able to hold his man long enough for the RB to advance. Below, against Central Oklahoma, a slower-developing run play sees him lose his block too soon, and his man stuffs the runner at the line. Davidson is once again lined up in the C gap to the right side, blocking the end.

Blocking smaller players, Davidson no longer has the strength disadvantage, but has trouble hitting and staying in front of his assignments at the second level or vs. DBs in run support and on the blitz. His form needs work and he takes shorter, slower steps. He doesn’t play with the athleticism he displays to beat those same players as a runner.

Again at Central Oklahoma, Davidson is in as the H-back, and has to pick up a blitzing DB. His smaller steps don’t match the speed of the DB, and he can’t stay in front or throw a block. The DB gets to the QB for a quick sack.

This play against Indianapolis shows his need to improve as a second-level blocker, while illustrating some common pitfalls of his as a blocker, in general. When the camera cuts to the wide shot, Davidson is just ahead of the line in the middle of the field, preparing to block #27 on a designed short pass to the RB. Even with time to prepare, Davidson gets out of position, doesn’t stay in front, and gives his defender a wide open lane to bring down the runner and end the play.

Attending the College Gridiron Showcase and scouting the on-field workouts, no offensive player impressed more than Davidson. With the athleticism he showed and how smooth he played, he was the clear top tight end at the workout. Surprisingly sticking around to work out as a receiver, he looked like one of the best at that position, too, with the athletic ability to match his counterparts in that workout.

Speaking with him during the multi-day event, he showed the type of personality every locker room needs and fan base wants, and he proved that further by being one of the first players to volunteer to stay to run routes for the QBs (last position of the event), despite going through two workouts already. His stated reason for doing so was because the quarterbacks were there to throw to him, so he wanted to help them, in return.

Looking purely on-field, there is a lot to like from Davidson as a receiving tight end at the NFL level. His athleticism is above that of many in the league and gives him the ability to stretch the field for an offense and rip off some big plays. His hands and range to make catches are good, and with some more aggressiveness will be able to get up and win a lot of contested throws with his height advantage over every player that covers him.

The limit on his ability as a rookie comes from his lack of bulk size and difficulties blocking. He needs to add some muscle to retain blocks against NFL linemen and linebackers, and has to improve his form and ability to hit blocks on faster players and in the second level. He is more than ready to be a TE2 as a receiver, but not yet as one lining up off the tackle and being a lead blocker on a carry to the outside.

Davidson comes with the ceiling to be an above-average starter for a team that likes to employ tight ends as downfield weapons in the offense, and to be one of the better athletes at the position in the NFL. As a rookie, he can be an immediate threat for a two-TE system that utilizes both as vertical weapons. While not the position he will play, Davidson was also one of Division II’s best punters his entire career, and gives his future team one of the best emergency punting options in the NFL.

Previously someone who may not have been drafted, Davidson’s work during the pre-draft process has likely guaranteed he gets his name called by the end of Saturday’s Day 3.