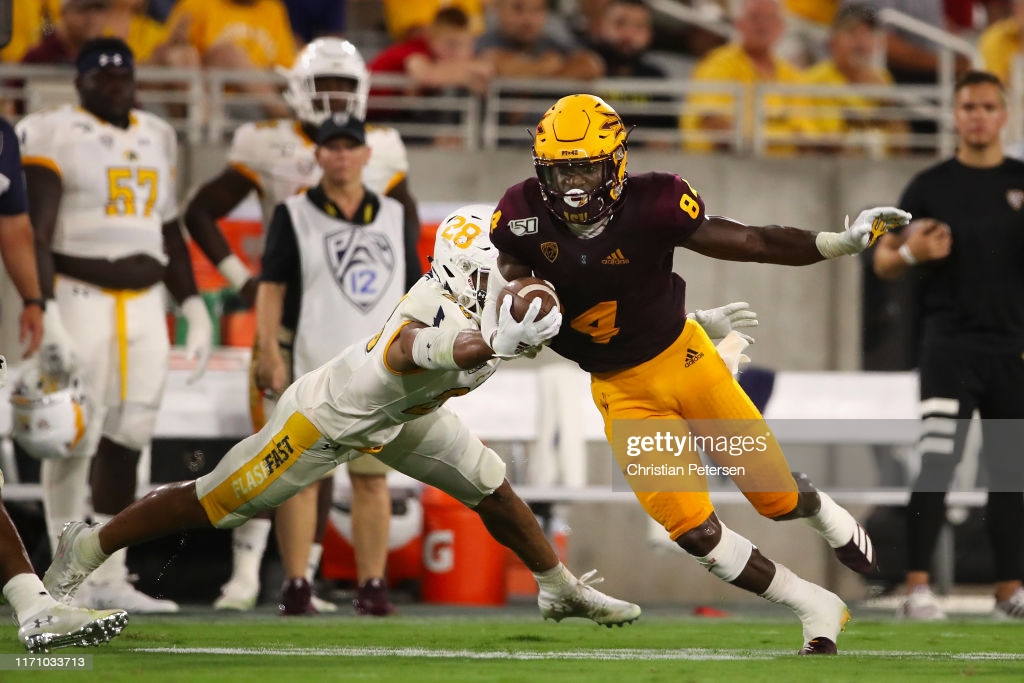 Frank Darby is a possible late day three selection that will definitely get some looks from NFL scouts.  As a three-star prospect, Darby wasn’t highly recruited out of high school, but he still received some offers.  Originally, he committed to Iowa, before decommitting and committing to Arizona State.  At Arizona State, he would go on to show flashes of potential behind teammates N’Keal Harry and Brandon Aiyuk (both recently drafted by NFL teams).  Darby’s best season was in 2019.  He produced 616 yards and 8 touchdowns on 31 receptions.  Darby was invited to the 2021 Senior Bowl following his shortened 2020 season, where he had a catch in the Bowl Game for the National Team.  Overall, Darby is raw, but he’s shown some appealing potential.  Now to the clips.

In this first clip from one of his two 2020 games, this being against UCLA, Frank Darby makes a nice catch by the sideline with little time remaining in the fourth quarter.  He’s boundary side and is working with a free release.  With his defender giving cushion, he easily turns to the outside and snags the catch above his head.  While I think he could’ve done a better job of selling the out-breaking route by dropping his weight more urgently in his break (this would’ve helped him to not round the route), he does a fantastic job of anticipating pressure from the DB by immediately bringing the football into his chest to secure it.  He also ensures that he simultaneously gets his feet inbounds before heading out of bounds to stop the clock.

This clip is from Arizona State’s 2019 game vs. Sacramento State.  Frank Darby displays his ability to win vertically.  He’s being pressed at the line boundary side and gets his feet moving vertically before shifting his weight towards the sideline and upfield.  Despite being squeezed to the sideline, Darby fights through the contact that the DB initiates and is able to stack him in the process.  Once he feels he has good positioning, he gets his head around to locate the football.  It’s off to the races once he secures the catch: Touchdown.  However, the touchdown is called back due to a personal foul (blindside block) penalty.

This clip is from ASU’s 2019 game against Oregon.  It shows Frank Darby (field side, bottom of the screen) winning vertically yet again.  Off the line, he utilizes a throw-by technique to easily knife past the first DB in front of him.  He then utilizes a stutter, while also slightly dropping his weight and turning his head back to the QB, acting like a true route salesman to DB Jevon Holland.  Holland bites on the fake and Darby is able to fly past him, then get his eyes on the football.  He catches the pass over his shoulder then tight-ropes the sideline for six.  Great throw by the QB (ASU quarterback Jayden Daniels had some impressive throws/plays when watching Frank Darby.  He’s a guy to keep an eye on in a future draft class) as well.

This clip is from the same 2019 game against Oregon.  Frank Darby puts some RAC ability on display.  Starting out wide boundary side, Darby utilizes a foot fire release off the line post-snap.  After cutting inside near the numbers, Darby gives a little push to the DB guarding him then sits down on the hitch route.  He displays confident hands to leap and snatch the ball out of the air above his head.  He then quickly turns around and gets his feet churning to make something happen in the open field.  He shows some great vision and elusiveness to weave his way across the field and deep into enemy territory.

Back to Darby’s bread and butter: stretching the field vertically.  In this clip from Arizona State’s 2019 game against Colorado, Darby hauls in a deep ball while carrying the DB on his back.  Lined up out wide to the right (bottom of the screen), Darby utilizes a quick jab with his right foot before rapidly gaining momentum upfield.  He gets his head back to track the football, and even though he has to slow up slightly (which gives the DB a chance to recover), Darby secures the pass in the bucket and holds on through contact with the ground: TD.

In this clip from the same 2019 game vs. Colorado, Frank Darby displays his foundation as a blocker.  He (top of the screen) rockets off the line with urgency at the snap, engages the defender with good hand placement and leverage, and maintains the block until the play is over.  Then he shows some emotion at the end of the play to celebrate the score.  Darby has been regarded as a leader and team-oriented player by coaches and peers at Arizona State.  That checks a character trait the Pittsburgh Steelers look for in their potential draft prospects.

This link is for Frank Darby’s one-on-ones from the Senior Bowl.  You can see his raw route running when it comes to curl/comeback routes as he has to sink his weight, put on the brakes, and then come back to the football.  However, he also shows the ability to fight through contact in the release and stem of his routes, which (as has been noted) is one of his biggest strengths as a WR.

In this clip from ASU’s 2019 matchup with USC (that Darby had a solid outing in: 3 catches for 86 yards and 2 touchdowns), Darby (bottom of the screen in the bunch set) drops an easy uncontested catch in the end zone.  Instead of catching solely with his hands using proper technique, he tries to trap the pass with his chest, dropping it.  Catching with his body is something I noticed Darby do at times when watching his film, and it’s definitely a habit he’ll have to (and should be able to with NFL coaching) work to get rid of if he becomes a part of an NFL roster.  Can’t have costly drops at the wide receiver position (or any position for that matter).

This clip is from ASU’s 2019 game against FSU in the Sun Bowl.  It’s an example that shows why I think Darby will benefit from working on his footwork and route running in general.  Here, Darby (out wide, top of the screen) utilizes a foot fire release off the line, but the foot speed just isn’t there.  The DB gets his hands on Darby and stays on top vertically, squeezing Darby to the sideline and giving the QB nowhere to throw the football.  Darby is a menace when given free releases so that he can build up steam, but he may struggle against athletic press corners at the next level.  If he’s able to further develop his footwork off the line, he should be able to battle those types of DBs (he already knows how to use his hands to fight through contact in contested catch situations.  That is one of his strengths, as was just noted in a previous clip).

With so much talent in the wide receiver group this year, it’s hard to estimate where guys like Frank Darby might be drafted.  Like Damonte Coxie, Frank Darby’s athletic testing numbers weren’t great, and will likely be his main roadblock to being selected in the 2021 NFL Draft.  However, also like Coxie, Darby is a player who shows up and produces (Darby produced less statistically, however).  What he (and Coxie) show(s) on the field can’t always be measured.  Considering that, the flashes of potential that Darby’s put on tape over his collegiate career might be enough for an NFL franchise to want him on their roster.  If drafted, he will likely be viewed as a developmental receiver, who should be given time to refine his game before being asked to contribute on the active roster.  He could provide good value late day three, especially as a member of special teams early on, while working to carve out an expanded role down the line.