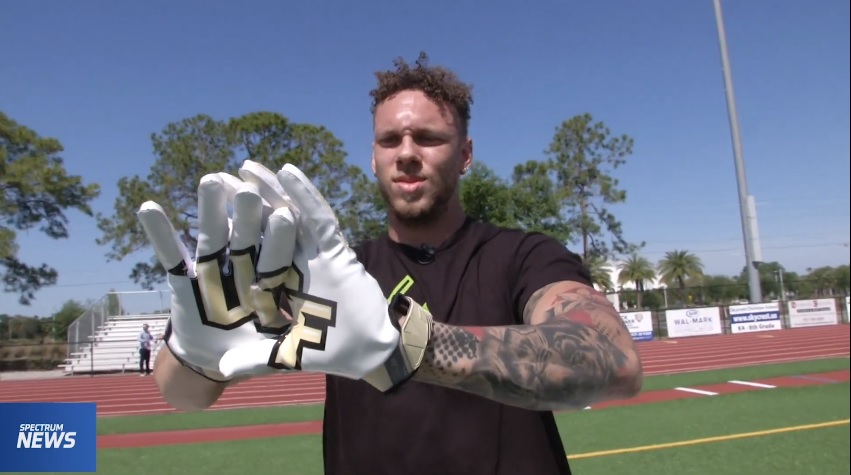 – Great athletic profile for the position in terms of deep speed (4.43 40) and explosiveness (40.5” vert, 133” broad)
– HWS specimen with the size and length (33 6/8” arms) to impose his will on smaller defensive backs
– Has on the boundary, in the slot, and also in-line and as an H-Back move TE
– Long strider that gets up to top speed quickly and eats the cushion of DBs in a hurry
– Great field-stretcher that can work vertically and present his passer with a big-bodied receiver downfield
– Dangerous when in-line or asked to line up as an H-Back, and stretches the seam up the middle of the field against lesser athletes
– Has the size and body to win contested catches against defensive backs in single coverage
– Smooth runner over the middle when breaking inside
– Averaged 23.6 and 18.0 YPC in his two years of playing experience
– Willing and capable as a blocker and has special teams experience

– Needs to develop more body control as a receiver and adjust to balls thrown at different platforms
– Will allow defenders into his frame to defend passes and needs to play with his size better
– Can have a case of he drops at times, needing to more consistently secure the catch
– Will do well to refine his route running and suddenness out of his breaks

– Redshirt senior prospect from Palm Harbor, FL
– Only began playing organized football as a senior in high school
– Briefly played soccer for Florida Gulf Coast University after high school
– Transferred to Western Kentucky, accepted him as a preferred walk-on to play football
– Transferred to UCF as a walk-on during the 2017 season after not seeing the field at WKU
– Contributed as a special teams ace in 2018, making seven tackles and recovering a fumble to earn a scholarship midway through the year
– Started four games of 13 played as a redshirt junior, recording 19 receptions for 448 yards and one TD
– Started six of nine games in his senior campaign, notching 30 receptions for 530 yards and scoring eight TDs

Jacob Harris from UCF is the definition of a late bloomer. The guy didn’t start playing American Football until his senior year of high school, exceling on the soccer pitch rather than on the gridiron as a youth. He ended up going to play soccer at Florida Gulf Coast out of H.S. after graduation, but wanted to give football a try and transferred to Western Kentucky.

After not seeing the field for the Hilltoppers, he transferred back home to Orlando where he spent a majority of his time on the scout team and cutting his teeth on special teams for UCF. After earning a scholarship going into his junior season, Harris finally cracked the offensive rotation at receiver, posting impressive YPC averages as a vertical, downfield threat in his two seasons of action.

Harris has a rare combination of size and speed that any scout yearns to find in a receiver prospect. He has legit buildup speed, being a long strider, and can get on top of the defense in a hurry. We see that here against USF, where Harris gets an outside release on the left side of the formation against the corner, taking advantage of the defender’s eyes in the backfield as he blows past him for the easy score.

Harris gets off of the line with great burst and eats the cushion of the defensive back quickly, putting cover men in a bind. We see Harris line up in the slot here and run the slot fade on the nickel defender, getting on top of his toes in a hurry and getting the outside release along the sideline, hauling in the TD catch with outstretched hands in coverage in the back of the end zone.

His size and length make him a viable possession red zone target that can win with his body in contested catch situations. He can body smaller defensive backs and play through contact, bringing in tough grabs over the middle and in the end zone. We see the latter here against Tulsa on the post corner route on the right side, putting the defender on his back and making the grab for the score.

While still pretty raw at the position for the lack of play time he has had, Harris does utilize his traits well for what he has. He can play against press man and uses his arms to fight off of the jam at the LOS, being able to effectively stack defenders as we saw in the first clip above. Harris does the same here in the red zone, hitting the corner with the outside hand and getting his inside hand through to get a step on the defender. He doesn’t get the look on this play, but you see good hand usage for a guy that should win in these situations.

Harris is a smooth runner over the middle of the field and can use his size and length to get inside leverage on his breaks. Here against the Cougars, we see Harris operating in the slot. He gets the inside release on the defensive back and gets a good amount of separation on the defender, catching the pass in-stride and breaking through the arm tackle for the score.

While Harris has primarily played split out as a WR, he has taken some snaps in-line and in the H-back position as a move TE. When utilized here, he is a true mismatch for any LB or S tasked with covering him, especially vertically. Here in the tight formation, Harris lines up in the slot on the LOS like a TE ready to block. However, he slips into the second level and runs right past the defender down the seam for the easy pitch-and-catch TD strike.

For being a physical freak of a receiver, Harris is a very willing blocker that gets on his man and runs his feet on contact in the run game. He can refine his technique a little, but his want-to and effort are great to see as a guy that had to earn a role via special teams in order to see the field on offense. Here are a couple of examples of Harris engaging the defender as a run blocker from the H-Back and WR positions, taking care of his assignment in each instance effectively.

While Harris is incredibly skilled as an athlete, he does have a ways to go in developing as a well-round receiver. He can be a little slow coming out of his breaks at times, and can do a better job of keeping defenders off of his frame when going up for a pass. Here against the Bulls, we see Harris running out of the slot on the left side of the formation.

He gets right into the defender who gets a good stride in his chest, throwing him off his route. The defender then redirects Harris out of bounds, making Harris work to reestablish himself in-bounds for the pass that is coming his way. However, Harris is unable to adjust back to the pass, having the defender step right in front of him for the INT. Should Harris play more to his size and keep the defender’s hands off of his frame, he likely doesn’t get rerouted and is in position to make the play, or at least force the incompletion.

Overall, there is a lot to like for Harris’ limited sample size as a college receiver. He is a big-play threat waiting to happen down the field, but also has the capability to work the intermediate as well as a possession style receiver. Harris is unselfish as a receiver, willing to stick his face in the fan as a blocker and play with great effort in the run game. He also has good experience on special teams units, meaning he will be able to contribute on kick and punt coverage units for whatever team selects him.

However, he skill needs to grow into his frame and be more physical as a playmaker and improve as a route runner in order to win consistently as a receiver. His athletic traits and testing numbers, upside, play style, and rawness as a receiver remind me a lot of Stephen Hill, who came out of Georgia Tech and was drafted by the New York Jets several years ago, who too was a HWS specimen as a field stretcher who needed some refinement to maximize his potential.

The Steelers could use a receiver that can come in for James Washington who is at the end of his deal as a guy who can take the top off the defense and provide the passing game with another big-bodied threat in the red zone. Harris would be a great selection as a guy that can fill Washington’s role in 2022 as he develops more under NFL coaching, and can play a key role on special teams and effectively take Chase Claypool off of coverage units to save him for offensive snaps as he develops in his second year.

The possibilities of adding weight and moving to TE or being used situationally near the LOS are there, but Harris should be seen as a ball of clay that can be molded into a legit receiving threat at the next level as he continues to develop his game.