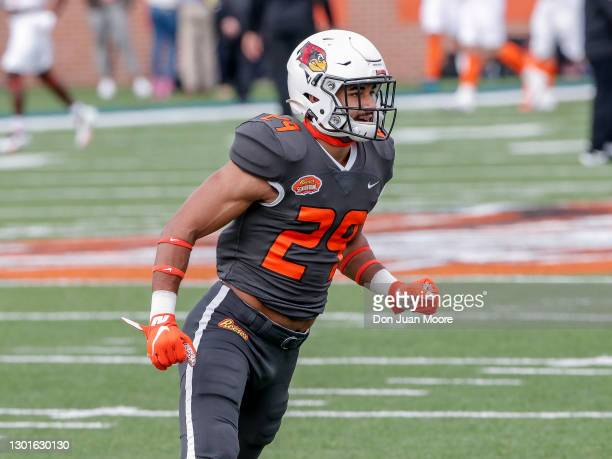 After a good year in 2019, Christian Uphoff was another small school player whose season got moved to the spring. He decided to forgo his senior season and enter the draft. He has very good size and played primarily in a split safety alignment to the wide side of the field, and had success as a kick returner.

Against the pass, he played primarily in a two-deep set, but was also used near the line of scrimmage and in Man coverage on tight ends and slot receivers. He has solid range and Zone awareness in coverage and was solid flipping his hips to adjust in coverage. He shows good reaction to routes in front of him and aggressiveness attacking screens on the outside. In Man coverage, he uses his size to be physical with receivers and the athleticism to handle tight ends one on one. He has solid timing when used to blitz.

Against North Dakota State, he hangs with tight end on this scramble drill and is able to break up the pass.

At Youngstown State, he is in Man coverage over the slot and shows good feet and a flip of the hips to stay with the receiver on the deep route, but seems to lose track of the ball at the end.

At Youngstown State, he is over the slot in and will read the QB to jump under the receiver to knock away the pass.

Against the run when playing from deep, he reads the play well and shows the willingness to get downhill. When he comes to balance and aims low, he is a good tackler. When playing near the line on the edge of scrimmage he shows good aggressiveness to crash the backfield and make plays behind the line of scrimmage.

At Youngstown State, he’s the deep safety on the far side of the field, and comes a long way to make a tackle on the sideline near the line of scrimmage.

At Youngstown State playing from the right edge, he attacks into the backfield to make the tackle.

At North Dakota State from the slot, he plays under control, squares up the runner, and makes a good tackle.

Uphoff had some trouble finding the ball in the air downfield in the games watched. He has adequate acceleration to play catchup in coverage, and takes marginal angles to the ball and will overrun the ball carrier. He displays adequate physicality overall as a tackler, decelerating before contact and falling off the ball carrier. Uphoff was poor getting off of blocks, relying on a spin to try to avoid blockers. He tackles too high with the majority of his attempts above the waist. Angles versus the run are too deep, allowing cut back lanes. He his high cut and his change of direction is adequate.

Against Southeast Missouri State, he will come up to attempt to make a tackle on the pass over the middle, but there is no power and he aims too high and falls off.

At North Dakota State, he is over the slot and will come downhill over-aggressively and whiff on the tackle, leading to a big play.

Overall, Uphoff has good size, can play deep in Zone or cover tight ends in Man coverage, diagnoses run plays well, and when playing under control, is a good tackler. Areas to improve include improving his angles to the ball versus the pass and the run, his aiming point and physicality when tackling and coming to balance before attempting to tackle.

As with all these players who didn’t play this season, it’s difficult to judge what you’re getting without that extra year of development. Some team will be intrigued by his size, and he also has experience as a kick returner. He is a developmental prospect who would best fit in a two-deep split safety defense that can also cover tight ends. In Pittsburgh, he could be a core special teamer, with potential to develop into a contributor on defense.