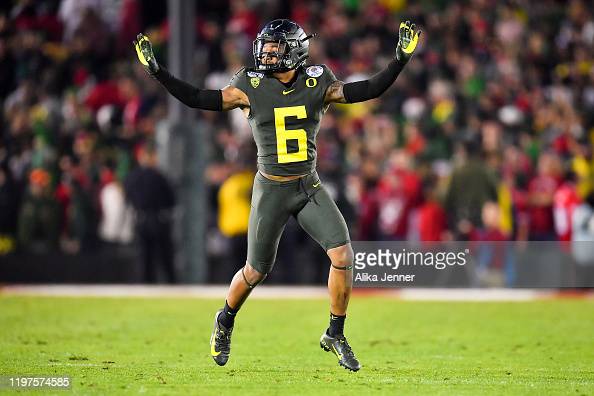 – Filled-out frame for his size, and also possesses good hand size (9 5/8”) to secure the ball in the turnover department
– Possesses good straight-line speed (4.48 40), and acceptable explosiveness (34.5” vert) for a DB
– Has good play strength (15 reps) and plays with that same demeanor
– Played both inside and outside as a CB, as well as a split zone safety
– Plays very physical as a run defender and in pass coverage
– Does a great job getting hands-on the receiver near the LOS
– Does a great job playing underneath zone coverages where he can break on the ball in front of him
– Will play through the catch point of the receiver, contesting the pass as it arrives to its target
– Has the ball skills you like to see from a DB, having six career INTs to his credit
– No trouble coming downhill and sticking his face in the fan as a willing tackler
– Has never missed a game due to injury

– Has average height for the position
– Average to below-average arm length (30 5/8”) to deflect passes and condense passing lanes
– Hips appear to be a tad tight, leading to issues in transition out of a backpedal when in bump-and-run coverage
– Recovery speed is below average when a receiver gets a step on him
– Can get a little grabby when he feels he is beat

– Senior Prospect from Los Angeles, CA
– Excelled as an all-purpose offensive threat and defensive back at Salesian High School as the nation’s #1 athlete in his recruiting class
– Played in all 13 games as a backup CB during his true freshman season, notching 25 tackles, 1.5 for loss, one interception, and five pass breakups
– Became the full-time starter as a sophomore, recording 52 tackles, three interceptions, and nine pass break-ups in 13 games
– Started every game as a junior, racking up 47 stops, 2.5 for loss, an interception and seven pass breakups
– Initially opted out of the 2020 season due to COVID-19, but returned when the Pac-12 decided to play
– Had seven starts as a senior, recording 30 tackles and one interception
– Honorable mention All-Pac-12 in 2019, second-team All-Pac-12 in 2020

Deommodore Lenoir from Oregon is a versatile defensive back that hasn’t garnered the same attention as his fellow teammates during this draft season, but that shouldn’t be a knock on Lenoir as a player. He was the top athlete coming out of high school in his recruiting class, contributing as a runner, receiver, defensive back and returner on special teams. When he signed with the Ducks, he was inserted into the defensive backfield, contributing as a reserve immediately before earning a full-time role with the team.

Lenoir is an extremely physical player on the outside of the defense, playing much bigger than his size would suggest. He comes downhill in the run game with a demeanor that he wants to plant you into the floor, and has no qualms putting his body on the line. He is a good wrap-up tackler, mostly coming in with shoulders square and shooting his hips through his target. We see that here, as he is quick to trigger downhill once he recognizes the quick pass, breaking hard on the ball to take #18 Seth Williams to the ground with the wrap up tackle. Williams has nearly five inches and 15-20 lbs. on Lenoir, but Lenoir has no problems taking him to the turf.

He plays with great pursuit to the ball as a run defender, breaking on the ball carrier once he sees it and chasing the guy down with great angles of pursuit. We see that here vs. Nevada, where Lenoir had a great game, recognizing the outside run and breaking downhill to meet the runner at the LOS for little to no gain on the play.

We see a similar phenomenal effort in pursuit here, as Lenoir breaks on the short checkdown pass out of the backfield after covering near the middle of the field, taking a great angle to the receiver and finishing the play.

Lenoir does a great job breaking on the ball and contesting the pass when the play is in front of him, playing through the receiver’s hands to contest the pass. We see that here against Nevada, where Lenoir recognizes the screen play and attacks the ball through the catch point, forcing the incompletion.

The same can be said on this rep vs. the Trojans, where Lenoir plays close coverage near the sideline and breaks on the ball once thrown, catching the inside pass for the INT, and going back to his days as an offensive playmaker in high school, reversing field and making guys miss in open space for a good return on the turnover.

Not only can Lenoir break on the ball near the LOS, but he does the same when asked to run in coverage in the intermediate areas of the field. We see on this play Lenoir plays off coverage, giving a little space underneath to the receiver crossing the middle of the field. However, once the ball is thrown, Lenoir closes ground in a hurry, getting to the receiver’s hands and knocking down the pass for the incompletion.

Another example here against USC, where Lenoir is on an island on the outside, but does a good job pushing off of his back foot as the ball is released to knock down the pass near the goal line against #8 Amon-Ra St. Brown.

Lenoir’s physicality shows up in press man coverage, as well. He has good upper body strength and the hands to shock receivers off the snap of the football, bullying them near the LOS, making it difficult to get a free release. Here’s an example vs. Iowa State, where Lenoir gets a good jam on the receiver on the right side of the LOS once the ball is snapped, staying in-phase with the receiver on the over route and all the way to the opposite sideline, resulting in the incomplete pass.

He does a great job using the sideline to his advantage on the boundary, pushing receivers to the outside and out of bounds with his strong press. On this play, we watch Lenoir run the receiver out of bounds at the bottom of the screen, literally throwing him out of the club and running him into the bench on his own sideline.

However, this extreme physicality can be a negative if the receiver gets a step on him, resorting to holding the receiver and getting the PI call, which will only increase the yellow flags he can expect to see at the next level. Along with the tendency to panic and grab when he feels like he could get beat vertically, Lenoir also seems to be a little tight in the hips, being slow to open up and run out of a backpedal or make clean, quick transitions in coverage.

Here we see Lenoir dance with his feet side to side rather than opening up his hips on the inside-breaking route near the goal line, allowing a free release to the receiver where he ended up being lucky #15 Brock Purdy was being chased and didn’t see his man break open, almost certainly being a touchdown if he wasn’t on the run.

Overall, I like Lenoir’s game as a physical presence in the defensive backfield that is a natural at playing through the catch point and has the ball skills to take the ball away. He has special teams written all over him at the next level, and won’t be a negative asking him to play against the run. However, his ability to carry receivers vertically and transition in bump-and-run coverage is limited given his length and hip tightness, meaning he probably isn’t the best fit for outside duties at the next level if the team that selects him wants to avoid yellow hankies flying on occasion.

Lenoir’s best fit would be as a nickel defender in the slot, where he can play close to the LOS and play what is in front of him and be physical with the slot receiver over the middle, as well as contribute as a stout run defender and blitzer off the edge. He is best suited for zone duties given his ability to break downhill, but he has the ability to play press man coverage at the LOS and can be versatile for a defense, contributing as a boundary corner and split zone safety on occasion.

Former Oregon Duck Ugo Amadi is a good comp for Lenoir, as both players are nearly identical in size, length, athletic testing measurables, and play style as tenacious defenders on the back end. Amadi was tested on the boundary and at safety before finding a home in Seattle’s nickel position as a slot defender, and I foresee the same being said for Lenoir.

He realistically could be a great later-round replacement for Mike Hilton for the Steelers, as he has similar play traits as a defender that excels near the LOS and isn’t the best option covering top receivers deep down the field. Should Pittsburgh bypass CB early in the draft for other needs, I would be pleased with Lenoir as a potential solution in the slot for a team that likes to embrace a physical persona and create turnovers.