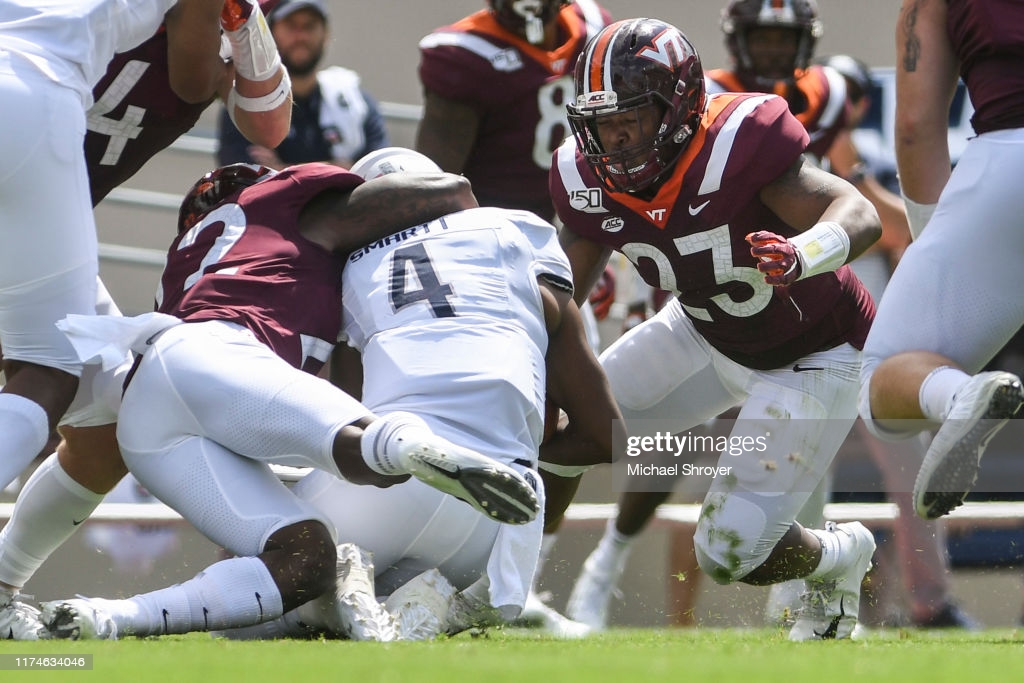 -Sound, consistent tackler
-Powerful frame overall and transfers power into hits
-Able to shoot gaps and cause havoc behind the line of scrimmage
-Plays with a clear chip on his shoulder and has something to prove on every snap
-Never have to question his effort or motor
-Shows ability to work through traffic and find the football
-Good overall feel in zone coverage to disrupt throwing windows

-Quite small for the position overall with obvious length and height issues
-Slow to read and react against the run
-Much more efficient when on the move pre-snap, which can’t happen every time
-Lack of length hinders his ability to stay clean against climbing OL
-Explosion and burst just not part of his game
-Build doesn’t match play style; not a run stuffer

-Played in 36 career games at Virginia Tech
-Finished three-year career with 293 total tackles, 34.0 tackles for loss, 10.0 sacks, five forced fumbles, three pass breakups, and one fumble recovery
-Named 2019 Second Team All-ACC
-Voted Team Captain in 2020 for the Hokies
-Was the only ACC player to produce 100+ tackles in both 2019 and 2018

Though he has some insane production through three years as a starter at Virginia Tech, Rayshard Ashby is a tough projection to the NFL due to his limitations on height and length, and the lack of explosiveness and overall athleticism to his game.

That said, it’s so darn hard to overlook the production and the plays he made on tape in a consistent fashion through three years as a key leader of the Hokies’ defense.

While he has short arms, lacks overall height and feels a bit overweight for the position in today’s game, Ashby made so many plays in college.

He was able to slip some blocks, shot gaps at a high rate and caused problems behind the line of scrimmage, and flashed some good overall range for the position.

Asbhy struggled to really read and react at a quick pace throughout the tape I watched, but there were some moments of brilliance from the veteran linebacker.

Here against Duke in 2020, Ashby reads the guard climbing to him at the second level and shoots his hands early and quickly to win, slipping inside the block to make the stop near the line of scrimmage.

Against North Carolina, Ashby again showed he could process and take a great route to the ball.

The thing I love about Ashby on tape is that when he arrives at the ball carrier, he’s going to transfer his weight well and bring force to the tackle, rarely missing when around the ball.

When not playing the run, Ashby showed flashes as a blitzer.

I loved this rep here against Miami, stunning the center with a great initial punch, and then showing off the strength to throw him aside and close for the sack.

Ashby knows he has short arms, so he slipped some blocks during his time at Virginia Tech.

This rep against Louisville was a thing of beauty.

If you put a running back on Ashby in pass protection situations, you’re putting your QB at risk.

Here against Wake Forest, Ashby does a great job chewing up yardage to reach the Wake Forest back in pass protection, busting out a quick swim move to win and then sack the QB.

Limitations popped up on tape though.

Against North Carolina, Ashby lets the lineman reach him, causing him to get caught up in the trash. Notice that he doesn’t use his arms to keep the lineman off of him, instead ripping underneath to slide off the block.

From there, he isn’t able to transfer his power because he’s just coming off a block, allowing Williams to bounce off of him.

Overall, I see so much of Vince Williams in Ashby’s game. He’s not useable in man coverage but has a good feel in zone, blitzes and shoots gaps well and is good against the run overall.

He just doesn’t have the athletic profile of the decent testing numbers many inside backers in this class have.

That said, he’s well worth a seventh round or UDFA flier.