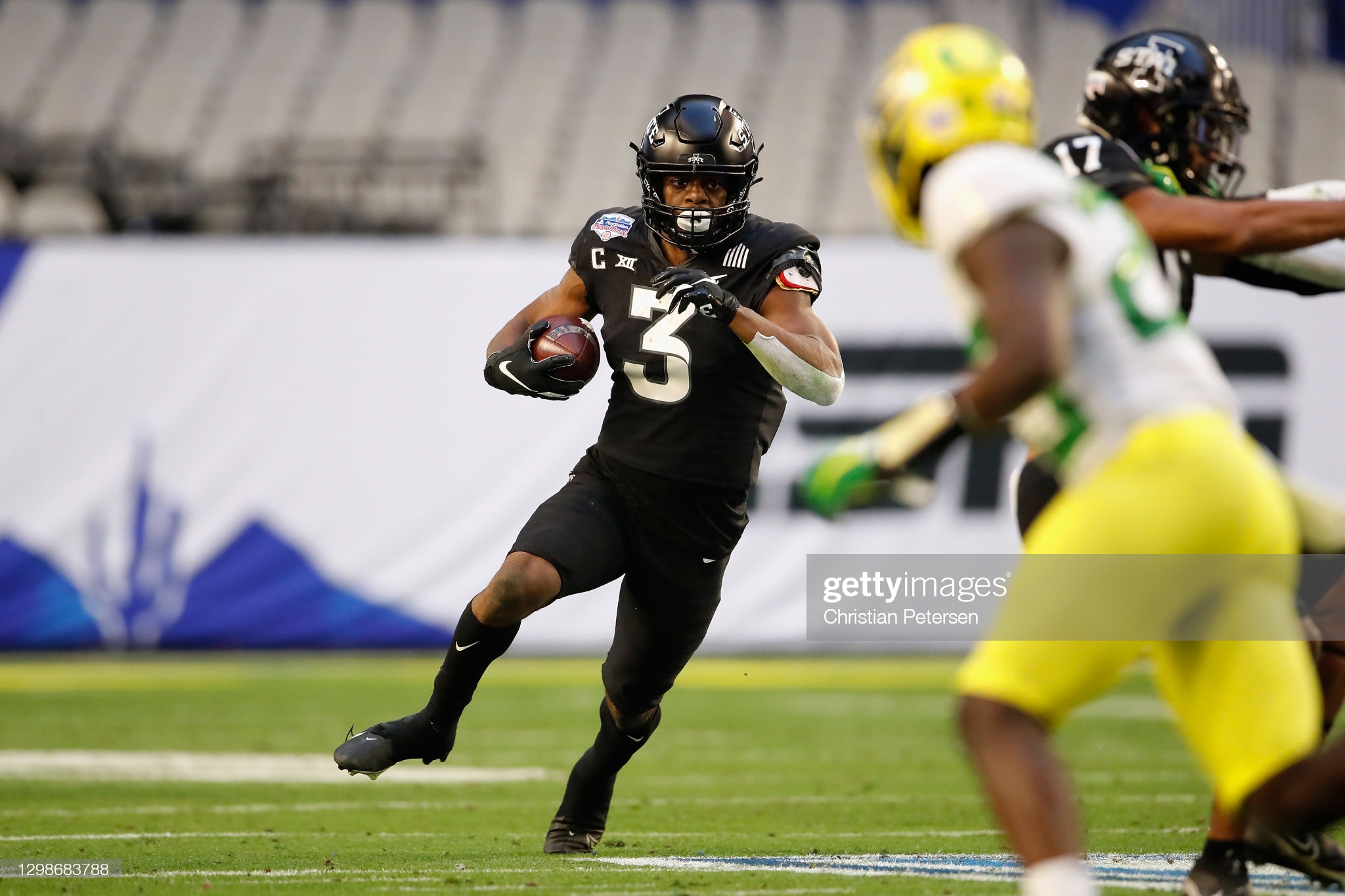 Kene Nwangwu (Ken-nay new-WAHNG-woo) was listed as a running back for the Cyclones during his four-year career at Iowa State, but where he starred for the team was at kick returner. He started three career games as a running back while playing behind NFL starter David Montgomery and Heisman contender Breece Hall, but was the team’s primary kick returner every season.

Nwangwu’s game as a runner and returner is built around his top-end speed, as one of the fastest players in the 2021 draft class. He is at his best when he gets to use that speed to find open space and hit lanes, which made him a weapon for Iowa State on outside carries.

Here against Oregon in the Fiesta Bowl this year are a pair of runs where Nwangwu showcases his vision to see the lane forming ahead of him, and his top gear to get through the lane and rip off a chunk play for the first down (or close to it) for the Cyclones.

Displayed on these plays, particularly the first one, is Nwangwu’s signature cut move as a runner. He can deliver those cuts at any time and with no warning to shift his direction left or right, and doesn’t sacrifice more than a sliver of his top-end speed and momentum to deliver them. In addition to helping him adjust his direction and elude defenders mid-run, Nwangwu can also deliver a larger one that makes defenders ahead of him bite from yards away.

Nwangwu’s speed also plays on inside runs when he can find a clear lane. Against West Virginia, Nwangwu gets through the line up the middle and immediately gets to his upper gears, accelerating between two nearby players and then simply pulling away from the Mountaineer defensive backs. Prior to reaching the line, Nwangwu hesitates to let the lane form. That is a strength he shows on inside plays, avoiding using his top speed too early and running into his line before they can clear away the traffic for him.

One final example of what Nwangwu can do with his speed. Against West Virginia, the Mountaineers have him caught in the backfield on what looks like a broken play. Nwangwu keeps kicking it outside, and eventually finds some daylight. With a cut upfield, he avoids a TFL and instead nearly earns the first down. Once again, there are WVU defenders nearby that he is able to just blaze past, and watch Nwangwu’s speed just before he gets back to the line of scrimmage. That is instant burst, and can make players within arm’s range miss, just like #8.

What makes Nwangwu excel on outside runs is also what allowed him to be an all-star and main kick returner his entire career for Iowa State. He shows the vision to see lanes unfolding in front of him, and the athleticism to get to the open space while evading tackles.

Watch his return against Oklahoma this season. He sees the Sooners crashing down the right side, and his blockers setting up room to the left. Nwangwu accelerates through the gap his teammates created, and then burns a defender down the sideline for another almost 20 yards. He nearly does the same with #0, the player who saved a touchdown.

Here is another return, in the opener against Louisiana-Lafayette. He bobbles the bouncing kick, but uses one of those powerful cuts mentioned above to fake out the oncoming defender. From there, Nwangwu finds the biggest lane available, and maximizes the yardage he can get on the return.

Nwangwu is a reliable runner on carries outside the tackles and when bringing back kicks, but his game did not match on handoffs inside. Too often, Nwangwu would fail to find the best lane or run into traffic, resulting in minimal gains or being stuffed behind the line. When he did find some room to run inside Nwangwu frequently played bumper cars through the lane, running into and bouncing off of blockers and slowing his momentum until being brought down.

This Fiesta Bowl example best encapsulates where he needs improvement finding lanes and running the ball inside. Nwangwu uses his hesitation to let a lane form, but instead of kicking it outside left where he can use his speed to reach space, he chooses to run into the heaviest area of traffic, where his line failed to generate any leverage off the snap.

Another issue Nwangwu will have to overcome is a lack of experience as a receiver. He displayed good hands working at the College Gridiron Showcase, but with the Cyclones was barely utilized in the passing game as a receiver. When he was, there were clear areas he showed need work. There is a hesitation when going from making the catch to becoming a runner, which lets defenders close the distance between he and them before Nwangwu can kick into high gear. He also lacks aggressiveness as a route runner, needing to be more urgent in running the stem and at the break point. He also did not relocate on plays where his route was covered and his QB was scrambling, choosing too often to sit at his end point with a defender right there.

Where Nwangwu played positively in the passing game was as a blocker. He was willing to chip players before getting out as a receiver, helped pair with his tight end to double block a rusher off the edge, and was more than willing to deliver a shot when the opportunity was there. Here is a big one, thrown against Louisiana. That is Nwangwu throwing a shoulder and planting a linebacker to the ground to keep his QB’s pocket clean, before going out to the flat.

Nwangwu’s speed and athleticism alone were going to get him drafted, or signed as a priority UDFA. Adding in his return ability, Nwangwu’s stock jumps up to a likely Day 3 selection, and someone who can easily project to be a primary kick returner for his team as a rookie, and a long-term returner at the NFL level. At the College Gridiron Showcase, he was one of the top performers at his position, with an impressive display of speed that stood out from his fellow backs.

The rest of his game requires some degree of projection to the NFL level, given his small RB sample size after serving as a backup his entire career at Iowa State. There’s plenty of tread on the tires, but not a lengthy stretch of game tape to fully determine how well he could handle an every-down role, or work as a receiving back.

Nwangwu initially projects best as a change-of-pace back or the “speed” portion of a platoon backfield, where all of his designed plays can be schemed to the outside and to space. He may never reach a ceiling of being the starter or handling half of the carries as part of a split backfield, but his speed should keep him an element of his team’s offense. With coaching and some serious practice reps, Nwangwu may develop into a receiving threat out of the backfield as well, given his willingness to throw a block when asked to play on passing downs.