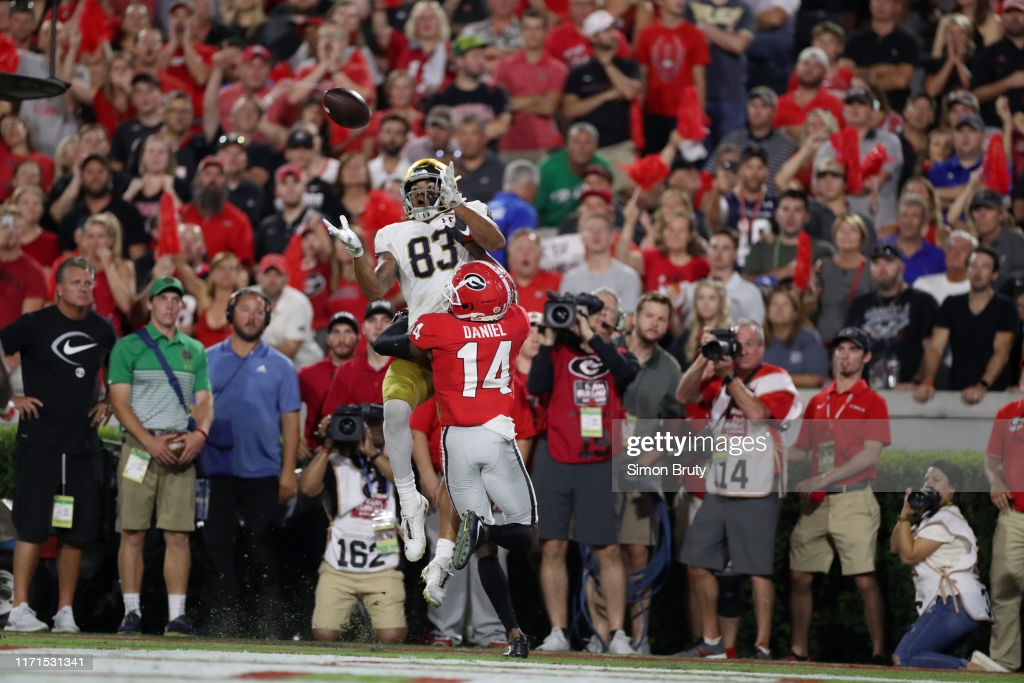 – Good arm length (33”) to crowd passing lanes and defense passes
– Does a great job with his arm length and physicality to get a jab at the LOS in press man coverage
– Excels close to the LOS in press man but has experience in Cover 3 as well
– Quick feet off of the snap (4.12 20-yd. shuttle) to open up and commit to side shuffle
– Can stay in-phase with the receiver relatively well
– Has shown the ability to recover well after giving up initial separation, getting into the face or the WR to contest the pass
– Aggressive player with a motor when it comes to pursuit or sticking his face in the fan as a tackler
– Will come downhill quickly in run support or on screen passes, making his presence felt on the perimeter
– Can likely play outside in a pinch as well as be a mainstay in the slot
– Has the profile to become a core special teams player

– Average to below-average speed (4.62 40) and explosiveness (31” vert, 119” broad) for a DB
– Doesn’t track the football well in the air and ball production is lacking
– Can easily be baited on double moves and head fakes by the receiver, losing a step in coverage and allowing the receiver to get on top of him
– Will panic down the field when he thinks he is beat, or a receiver has position on him
– Tends to get grabby as a receiver gets separation, holding onto the player’s arm or jersey throughout the rep, likely leads to many PI calls at the next level
– Plays the receiver in coverage rather than the ball
– Isn’t the quickest to process what is happening in front of him, limiting his reaction time to break on passes and make splash plays

– Senior Prospect from Griffin, GA
– Wasn’t academically eligible to play for Georgia coming out of Spalding High School, went to Georgia Military College for two years
– Blocked three kicks on special teams as a freshman
– Ranked as the #2 JUCO prospect at CB in 2018, tallying five INTs in two seasons
– Was a team captain at Georgia Military College his sophomore year
– Originally committed to play for South Carolina before enrolling at Georgia
– Played in 13 games with 11 starts as a junior, recording 42 tackles, two for loss, and eight pass breakups
– Struggled with injury throughout his senior campaign, playing in eight games as a reserve and mustering only nine tackles, one for loss, and one pass breakup
– Senior Bowl invitee

DJ Daniel hasn’t commanded the same recognition his counterparts have at defensive back from Georgia in the lead-up to the 2021 NFL Draft, but he deserves some recognition for his play that he has provided the Bulldogs the past two seasons as an interesting draft projection. Daniel originally started out at JUCO due to poor grades in HS but transferred to Athens after becoming one of the best players at his position at the lower level. He made an instant impact for the Bulldogs, playing both inside and outside and contributing as a physical defender both against the run and while in coverage.

Daniel isn’t afraid to stick his face in the fan when it comes to run support. Actually, it may be one of his strong suits, breaking on the ball hard once he sees it on the outside, showing great effort to close ground quickly and deliver an effective wrap-up tackle. Here against Auburn we see Daniel sniff out the WR screen and come downhill quickly, wrapping up #18 Seth Williams and throwing him to the ground.

Daniel has experience playing in Cover 3 looks and transitioning fairly well to a side shuffle technique in coverage. He tends to watch the QB’s eye a lot in the backfield and will make plays on the ball once he sees the passer commit to the throw. Here against Baylor we see Daniel side shuffle on the boundary staring directly on the passer, and get the PBU on the miscommunication with the WR running deep. Daniel could have gotten the INT here, but it is a positive to see him get his hands on the football.

While Daniel is experienced in Cover 3, his best attributes come as a press man cornerback at the LOS. He has long arms for the position and does a great job jamming receivers at the line with a quick jab to reroute them. He also is extremely physical from the start of the rep through his transition to running vertical, staying in close proximity to the receiver’s hip pocket, and will open up well to turn and run. Here in the Senior Bowl, we see a great rep from Daniel, as he shocks #5 Marquez Stevenson back and turns and runs effectively to stay in-stride with him downfield.

His long arms and aggressive play style are also assets at the catch point as he’ll battle WRs on jump balls and play through the receiver’s hands to break up the pass. You would like to see him play the ball more than the receiver for a chance at more picks, but he gets the job done. Here he gets the better of #6 Terrace Marshall Jr. with safety help coming from the side, getting his outstretched arm in-between Marshall’s hands to force the incompletion.

While his aggressiveness and hands-on play style is great for press man coverage, Daniel can get a little too anxious and grab the receiver downfield when he feels he can get beat. Below are a couple of examples where Daniel allows the receiver to get a step on him, and then proceeds to grab jersey, an arm, or wrap up the receiver before the ball arrives. All instances led to incompletions with his good play, but this tendency is going to have Daniel become a flag magnet at the next level if he doesn’t break the bad habit he has developed.

Daniel also tends to struggle when used in off-man coverage, being a tad slow to click-and-close on the ball when it comes out. Here against the Tigers we see Daniel come to a complete stop in his side shuffle, not being able to balance and transfer his weight forward, and allowing the receiver an easy reception on the comeback. He gets the tackle, but should’ve been in better position to contest the pass.

Daniel isn’t the most fluid mover in space when it comes to flipping his hips and being asked to turn and run with receivers down the field. Here on this rep we see Daniel try to get hands-on #17 Racey McMath, but the receiver get inside leverage and gets a step on Daniel vertically, cutting back to the middle of the field for the easy catch and run while Daniel struggles to transition, following McMath on his back instead of opening up his hips and transitioning inside.

He is susceptible to double moves on the outside and just doesn’t have the speed or burst to carry receivers vertically downfield without giving up separation. Here we see #14 Cornell Powell get a good outside release near the sideline and give Daniel a head fake inside, making Daniel hesitate, which allows Powell to stack him vertically and create nearly five yards of separation on the deep pass. The pass was overthrown, but Daniel was clearly beat on the rep.

Overall, Daniel is a fairly raw player, having only played at the high Division I level for a little over a year after dealing with an ankle injury all of 2020 and being in and out of the lineup. He is a good run defender from the defensive backfield and isn’t afraid to match up with the best of them in press man coverage and be a physical presence off of the snap and at the catch point.

However, his lack of technique, instincts, and athletic upside limit his effectiveness in coverage in terms of being able to run with great athletes down the field. He also will panic against bigger, physical specimens and will resort to taking the PI call over the risk of getting beat, suggesting he is in for baptism by fire at the next level. I compared him to Lavert Hill coming out of Michigan as a player with similar physicality and size, but lacking the athletic upside to succeed as an outside corner.

Daniel would be best suited for slot duties in the league where he can play close to the LOS to aid in run support and be used on occasional blitzes off of the edge. He is best suited for zone coverage responsibilities where he can play the ball in front of him and not have to carry receivers vertical in fear of drawing flags galore at the next level. He can be used in press man situations and can play outside in a pinch, but should have safety help overtop to avoid getting burned deep.

His special teams prowess he showed off in JUCO should get him on a game day roster early and allow him to play as the #5-6 CB on the roster and develop into a nickel after starting out mainly being used in dime or possibly quarters. Should Pittsburgh pass on CB early and need to address the position on Day 3 of the draft, Daniel could very well be in the cards to potentially fill the slot role and provide depth. However, I would suggest looking for a more seasoned defender with more athletic upside.