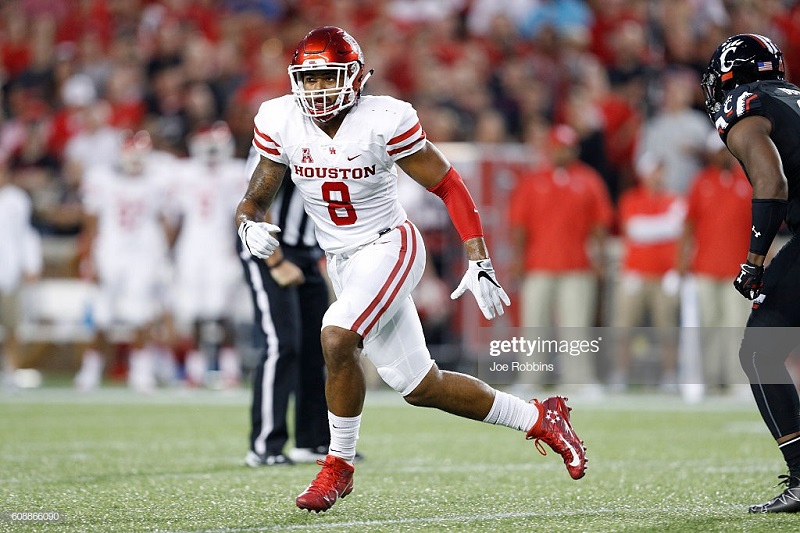 Emeke Egbule (#8) has good size and long arms and shows some good things on tape.  He also shows some not so good things.  He played OLB for Houston and was asked to do many things for their defense depending on the situation and excels in some areas. He lined up mostly on the edge and split wide over slot receivers.

Against the run, he shows good aggressiveness and punch when taking on blocks.  He has the strength and arm length to extend against blockers and set the edge on runs to his side and will use a quick push pull to shed blockers. He oddly has an ability to get held as well. In 4 of the games watched someone trying to block him got called for holding.  On runs away from him he does a solid job to scrape and contain on the backside. Consistency is an issue as he will focus on taking on the block and will lose sight of the ball. And for all the aggressiveness he shows taking on blocks he lacks that when tackling.  He’s not physical, doesn’t attack the runner to try to drive through them and relies on his arms way too much leaving him to slip off runners.

At South Florida he’s split left over the middle receiver. The run comes his way he sheds the block and makes a tackle for a loss

Vs Arizona on the left edge it’s an option run his way.  You can see him aggressively take on the blocker and take down the QB behind the LOS.

Vs Texas Tech, here is an example of him focusing too much on blowing up the block. He takes his eyes off the runner, gets too far up field and takes himself out of the play.

Vs Texas Tech from the right edge he takes on the block of the TE on the wing and pushed him back into the RB for the tackle.

At Memphis from the right edge another example of too much focus on the block. Sure he drives the TE inside but has no idea where the ball is and leaves the edge wide open

Against the pass, as I said he was often split wide to the strong side in coverage and make a concerted effort to disrupt the routes in front of him and going through his area.  He recognizes screens well and attacks the blocker with same aggressiveness he does vs the run. He shows good awareness in Zone gets good depth on his drops and keeps his head on a swivel looking for receivers in the area. He’s able to get in throwing lanes and get his hands up to get deflections. He’s adequate in Man coverage in the short area, often on WR’s, but wasn’t asked to do it often in the games watched.

Vs Arizona he’s on the right edge. He bluffs a rush and drops into Zone coverage and gets into a throwing lane to get the PBU.

At Texas Tech on third and very long he’s in Zone coverage over the left slot. He gets a hand in to knock the ball away and get a PBU.

As a pass rusher he shows some potential.  He has a good first step and gets up field quickly. Will try speed up the edge and shows some ability to bend. His most success full path was converting speed to power either with bull rush or long arm able to get under bigger OTs and get them off balance. He also shows good quickness looping on stunts to the inside. Unfortunately that’s about it.  He needs to learn how to use his hands to set up and counter blockers as well as learn new moves to try. If he could develop a slap/swim or a spin move to the inside to work off his outside speed he could become a threat.

At Texas Tech on the right edge it’s a speed to power and he shows a violent punch to knock the LT backward to the QB.

At Memphis from the left edge he gets a slow start at the snap but again uses power to get the OT off balance and put him in the lap of the QB.

Egbule is an interesting player and will be a prime example of whether a player can be coached up.  He shows good aggressiveness taking on blocks, has good acceleration and power rushing the passer and is a solid defender in Zone coverage. Can a staff get him improve his mental processing vs the run and get him to be more aggressive as a tackler? And can he learn to use his hands and counter the outside rushes going after the QB?

He’s raw but there’s solid foundation to work with and he’s a guy who can play on special teams and could be used as a sub package rusher/zone defender early in his career. If he can learn he has a chance to potentially be a useful full time player down the road.