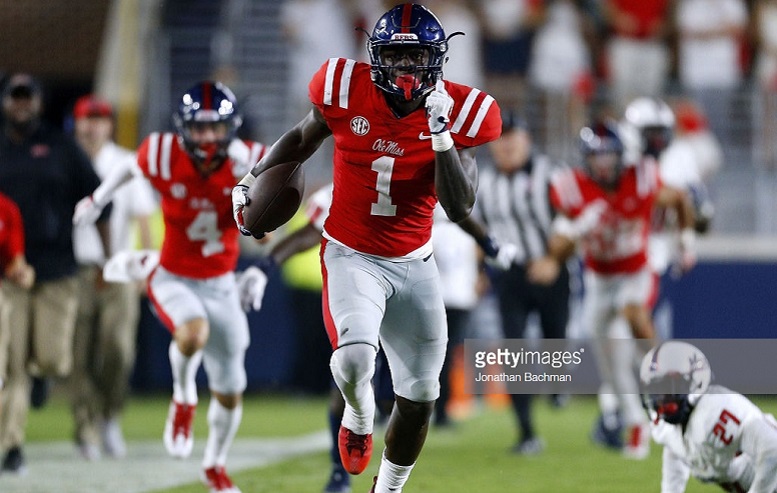 –Mostly lined up in slot, but occasionally played outside and in the backfield.

–Looks more like a running back with ball in his hands.

–Catches passes in the middle of the field.

–Same burst off the line of scrimmage whether a run or pass.

–Lost interest in plays not going to his side.

–Needs a lot of volume to be productive.

Split out wide right with a 12 yard cushion at the snap, Brown streaks right past his coverage while giving a double move that shakes two defensive backs out of position. He loses, then re-tracks the ball high in the air while being quite aware of the sidelines. The wideout stops his momentum sharly, which causes the defender to slip out of bounds as he is securing the pigskin. Brown darts for another six yards, forcing two Tigers to throw him to the ground for a huge gain!

Lined up in the slot, Brown attacks the corner right of the snap, swimming right past him with 5 yards off the line of scrimmage. This seems to confuse the defender, while the wideout finds a pocket of space between the first and second lines of defense. He snares the ball at its highest point, and immediately takes an angle that puts the three defensive backs on their heels creating open space. Using his fellow receiver’s block downfield, Brown spins, forcing two defenders to knock him out of bounds.

On the first play of the game, split out wide with a 6 yard cushion off the snap, the wideout takes a quick pass at the line of scrimmage. He catches the ball while focusing on the corner in front of him. Brown sinks his hips swivelling away from the first contact, and sets up the safety with a bad angle forcing the second miss. The wideout turns on the jets and dunks underneath for an 18 yard gain that probably should have created 6 yards at most.

Split out far left on a 3rd and 3, Brown faces press coverage at the snap. He sells running outside and cuts back inside, creating a little separation in the middle of the field. The wideout forces a safety to dive and miss him, stops for a split second that causes over-pursuit by other defenders. The receiver spins and leaps forward while being gang tackled for extra yardage.

Projection: late 2nd round to early 4th round