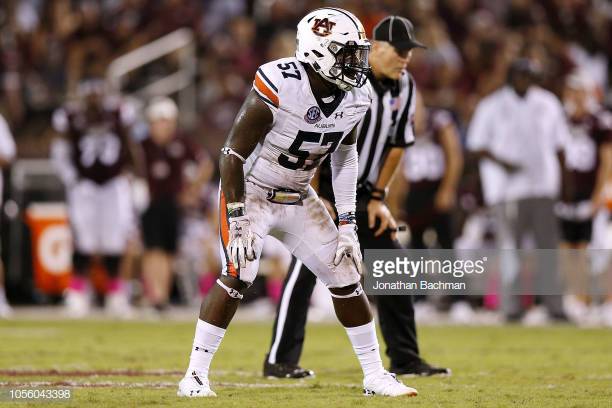 If you google the word ‘thumper’, there is a good chance that a photo of Auburn linebacker Deshaun Davis will appear next to the definition. Davis has been strictly attached to the thumper, downhill linebacker tag since he took over as Auburn’s starting inside linebacker three years ago.

Davis is your physical downhill linebacker who lays a beating in-between the tackles. You will be hard pressed to find a better two down linebacker in the SEC.

Watch Davis (#57) on the above play. The Auburn linebacker explodes into the backfield and stops the Georgia ball carrier in the backfield. A great goal line stop, Davis is able to use his strength and explosiveness to blow through his gap. His strength is one of his best features as the Auburn linebacker was able to rack up almost 30 tackles for a loss during his career.

Here he goes again, blowing up another blocker and another play, stopping a key third down attempt against LSU. Quarterback Joe Burrow is a sitting duck as was LSU tight end Foster Moreau (#18), who was tasked with blocking Davis. The senior linebacker takes a great angle on the play and Moreau, despite having a weight advantage, is unable to contain Davis.

If Davis played a decade or two ago, it is likely that your father would be raving about his ability and how he played ‘real football’. The Auburn linebacker is gritty, tough, physical and is a great run defender. Not only that but he is loaded with football IQ. He’s a three-year starter and has been Auburn’s main signal caller on defense. Davis has received praise from his coaches as they compare him to an on field defensive coordinator. That is some incredible praise and it will surely get NFL defensive coordinators buzzing as draft season approaches.

Unfortunately for Davis though, this is not your father’s NFL and being able to only stop the run is not enough to secure longevity in today’s NFL. In today’s NFL, linebackers not only have to be able to play the run, but also have the instincts and athleticism to play in space. This has been the biggest knock on Davis’ resume since he took the field for Auburn and his limitations are easy to spot on tape.

Two glaring problems in Davis’ game. First, his mental processing is far from elite. Watch the senior linebacker freeze for a millisecond as running back Brian Herrien presses towards the line of scrimmage. That split-second delay leads to a missed tackle and a huge gain. Davis’ processing is a huge concern considering that he does not have the athleticism to make up for his diagnosing skills. That leads to Davis often being in poor position to make plays and the result is usually missed tackles like the one above.

Secondly, Davis’ movements, especially laterally are incredibly stiff. He does not have the hips to keep up with the quicker and more elusive backs. On the play above, Davis meets D’Andre Swift in the hole but one cut to the right and the Auburn linebacker is left trailing behind Swift. Like a predator chasing its food in the wild, Davis is able to catch Swift from behind. Kudos to him for the great hustle and effort.

The Auburn linebacker showed up to the Senior Bowl last week on a mission to prove that he can play in space and should not be discredited as just a two-down linebacker. Unfortunately for him, his tape is married to his name and that tape highlights a lot of the concerns around his athleticism and ability in space. Davis showed up in Mobile in better shape, trimming down from a listed 246 pounds to 231 pounds in an effort to show more athleticism. He has two more tries to dispel the notion of his Auburn resume – the NFL Combine and the Auburn pro day. Should he test well athletically at those two events, he may be able to convince a team that he can be a three-down player. If not, his ceiling may very well be as a two down run stopper and special teams.

Games Watched: vs Georgia, vs LSU, vs Alabama, vs Mississippi State