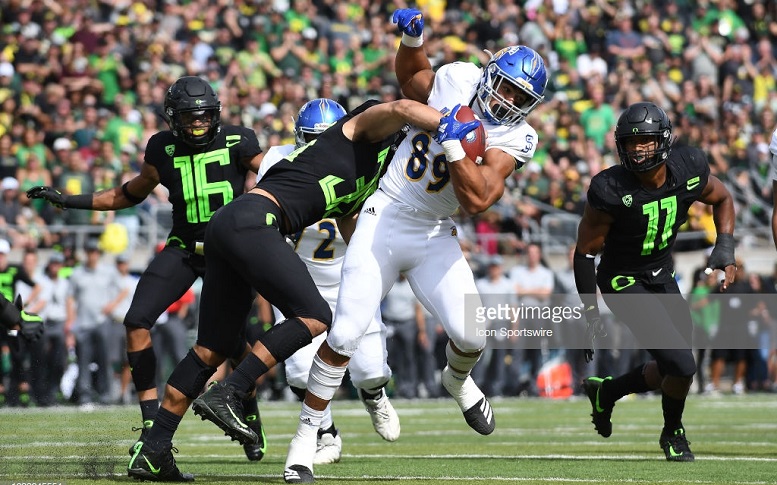 The tight end position is loaded for the 2019 NFL draft and like Daniel did earlier this week I’m going to choose one the isn’t as well known (yet) as some of the other prospects.

San Jose State Spartan and Senior Bowl participant Josh Oliver fits the profile of the modern tight end. Big, athletic and can stretch the field. It seems like every team has at least one of these types now a days and with good reason. They create mismatches of which the QB’s can take advantage.

Oliver was used all over the field lining up as the Y inline, as the H on the wing, in the slot and out wide. He shows good acceleration off the line of scrimmage and nuanced understanding of route creation. He understands the timing in the routes and that sometimes, for example, you need to hesitate to set up defenders or allow teammates to clear so his path with be free.

He has the ability to gain separation from defenders in a variety of ways. He can be physical with them at the top of the stem, he can use acceleration to run away and he shows good footwork on the outside to manipulate defender on the outside.

He can run all the routes on all levels. Has a good catch radius and ability to adjust to balls outside of his frame.  He tracks the ball well, high points when needed and show good awareness on the sideline and in the end zone to get his feet down. And after the catch he shows off his athleticism and strength with spin moves, hurdles or just dragging defenders for extra yards.

As a blocker he needs some work, as most TE’s do, but what I see are technical issues that can be fixed. What he does have as a blocker is the “want to”. He wants to block, he likes to be physical and will pancake a defender if he gets an opportunity. And he has good reps they aren’t all bad by any means but he can be a lot better.

The three main issues I see are when he makes contact he dips his head. Good defenders will sidestep him and he’ll be grabbing at air. Secondly, he bends too much at the waist and gets out over his toes. A good tug from the defender and he’ll be tossed aside.  And lastly, when blocking laterally whether in an outside zone scheme, a wham block inside or slide block across the formation he’s a bit slow getting to where he needs to be. Just needs to step up the intensity and get there a little faster.  All fixable issues.

Another aspect I wanted to mention is his situational awareness. The little things he does that doesn’t show up in the box score that could make a difference in the game. Covering up fumbles by teammates, making tackles on turnovers and sticking his hand in front of defenders on errant passes to ensure there is no interception.

Some plays and highlights that caught my eye.

Vs Hawaii, from the left slot he runs an out and up. He gets behind the DB and gets up to high point the ball and then show his speed on a 70 yard gain.

Vs Hawaii, again from the left slot he runs a shallow cross  and shows off a spin move to make a defender miss and  gets and extra 5 yards.

Vs Hawaii, I really liked the play. 12 personnel and he is lined up on the right as the Y. He and the TE on the wing are going to cross and run double post routes. He releases to the outside to widen the safety. Once he straightens out it puts stress on the defender and he’s able to get inside and again he goes up for the catch and TD.

Vs Washington State, from the right wing, here is a pretty good rep while run blocking and it shows that “want to” I mentioned. He’s got a good base and solid hand usage. You can see the head dip just before contact but he has the leverage and leg drive and takes down the LB.

Vs Washington State, from the right wing this is a middle screen. Easy catch and gets up field quickly. A defender has him wrapped up after a 5 yard gain but he drags him for another 10.

Vs Oregon, motion from the right wing in the red zone he heads toward the back pylon of the end zone. He is turned to the inside and displays his ability to adjust to the ball, twisting his body to make a contested catch and get his foot down for the TD.

Vs Utah State, split wide to the right and this is and NFL catch. Good quickness to get off the line of scrimmage and gain the outside of the DB. It’s a back shoulder throw and he shows the body control and good hands catching away from his body.

Vs Utah State, lined up as the Y on the right. This is a fairly easy catch as he is wide open. But what caught my eye was the explosiveness off the line of scrimmage.

Oliver is and intriguing player. He played at a smaller school not known for its football prowess but he performed pretty well against the PAC-12 teams they played (11 receptions for 92 yards, 1 TD) in 2018. He’s got all the physical traits you look for: athleticism, hands, football intelligence. To me he moves more like a big wide receiver than a tight end.

NFLDraftScout.com has his 40 time estimated at 4.84. He looks much faster than that on film. His combine numbers could make a big difference in where he gets drafted and I think he’s going to test very well. He could be riser.

I’m putting a pin in him for now and may plant a flag in him as one of my guys very soon.

Projection: Round 4 with the arrow pointing up

Games Watched: 2018 – At Washington State, At Oregon, Vs Hawaii, At Utah State