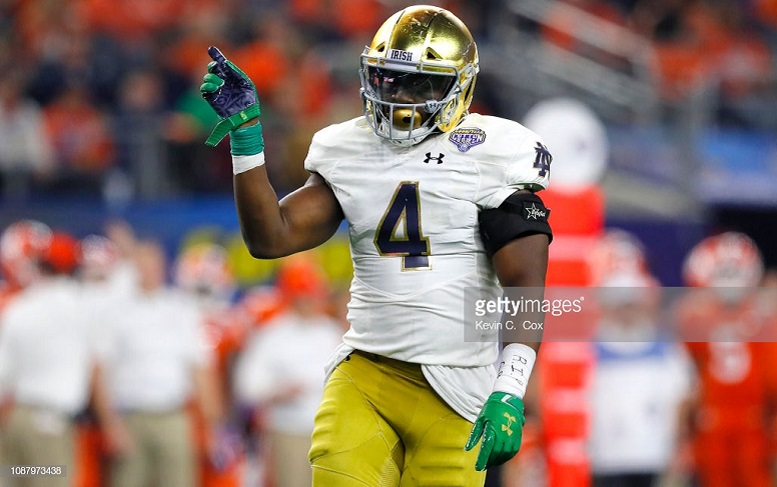 – 3 down linebacker, didn’t come off the field
– Good pre snap communicator with teammates
– Very good mental processing to read and react to his keys particularly on outside runs.
– Accelerates quickly and can close distance to the ball.
– Good awareness in Zone coverage to recognize receivers in his area and switch off when new ones enter
– COD to click and close in coverage
– Strong tackler able to take down all size ball carriers.
– Good timing and acceleration when blitzing to get pressure on the QB

– Inconsistent technique when playing downhill on inside runs
– Struggles to shed blockers vs OL
– Hesitates when filling the gap and taking on pulling OL
– Man coverage was limited to mainly short area passing zones in the games watched.
– Very little production in forcing turnovers and breaking up passes.
– Limited pass rush moves relying on rip and bull rushes.

After watching game one against Michigan, I’ll be honest, I wasn’t impressed. In my notes I used words like tentative, pulled up and lacks aggressiveness. The outlook wasn’t promising. But that is why we watch more than one game.

In the rest of the games watched he looked like a different player.

He’s looks the part being of similar size to the linebackers on the Steelers roster and is good communicator on the field constantly seen talking to other players and moving them in to position. At the snap you can see how fast his mental processing is matching the movement of the offense almost simultaneously. Really like his acceleration and he gets up to speed quickly. He plays sideline to sideline and takes good angles in his pursuit.

Against Stanford, he demonstrates how fast he can diagnose and how fast he can run. He key’s immediately and takes a perfect angle between two pulling OL, through traffic, to get into the backfield of a very fast Bryce Love.

On inside runs, he shows inconsistent aggressiveness. I think he identifies the play correctly and has the speed to get into the gaps to make tackles in the backfield or take on blockers in the hole and limit the gain. Be he tends to wait or slows at the line of scrimmage to take on the blocker and will allow hands into his chest and gets driven back. He must learn to counter the hand placement of the OL to be able to disengage quicker and shed the block. The ability is definitely there and he has shown that he can do it he just needs to be more consistent. I think the TFL totals could increase.

Against Syracuse, he shows that inconsistency I mentioned above. The read is good, he’s moving forward but then he slows at the line of scrimmage. If he keeps his speed, he beats the pulling tackle to the spot and closes down that running lane.

Key to the 3 down linebacker is the ability to cover. I love his awareness in Zone coverage seems to understand route combinations and has a good change of direction to break on the ball. He follows the QB’s eyes and flows within his zone. In Man coverage, he does a nice job against TE and RB particularly in the short area passing game and has the speed to run with TE’s up the seam. More man coverage could lead to more pass break up opportunities.

Against Stanford, he’s in Man coverage against a quick out from the TE. He shows the acceleration to close the gap and undercut the routes to make the INT.

Against Stanford, great awareness as he starts to carry the TE up the seam but his eyes are on the #2 receiver. When he sees the #2 break on a route underneath to the inside he flashes the change of direction to close on the pass to make sure it is incomplete.

Rushing the passer was not something that he did often. The sacks that I saw were reactionary plays within the flow of the game. He did get some push on bull rushes and used a rip move successfully.

Against Michigan, he reacts to the play action to the running back but when he sees the QB with the ball he dips his shoulder to split the block by the center and the back and get pressure that led to an interception.

Against Northwestern, he flows to his right with the RB. Once the RB stays in to block he settles and reacts to the QB scramble. Starting from the far hash and 11 yards away from the QB he’s able to chase him down for the sack at the far sideline.

Since the Ryan Shazier injury the Steelers have been looking for someone similar to fill the void. With so much more passing in the game the need for linebackers who can stay on the field for all 3 downs is a must.

Coney has the mental processing and speed to be a stopper in the run game and be effective in coverage. His turnover production was very low with most of it coming in his final season. Could be a sign it’s an area he is improving. He wasn’t asked to rush very often but with his acceleration he’s a good fit for how the Steelers use the linebackers in their blitz packages.

Projection: Day 2, second or third round

Games Watched: Vs Michigan, Vs Stanford, At Northwestern. Vs Syracuse, At USC